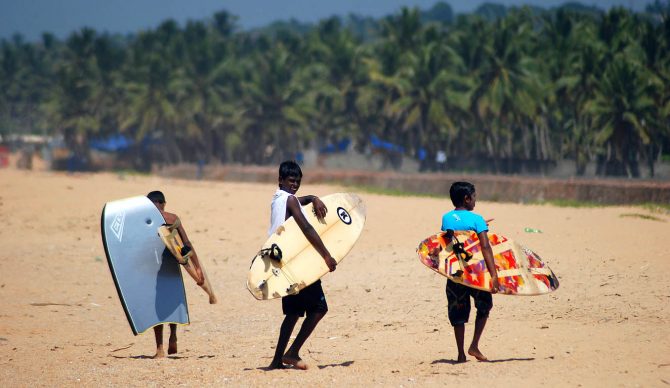 Surfing in India is thriving. And unlike its beginnings in America, parents there are embracing it. Photo: kovalamsurfclub.com

It wasn’t so long ago that surfers were seen by many as the slothful, drug-addled, and sunburnt dregs of U.S. society. Surfers were seditious; they wore their hair long and cuffs ’round their wrists. They were notorious.

There have been (and probably still are) plenty of parents in this country who expressly forbid their children to surf. So, their children gave up surfing, gave up their parents, or simply fulfilled their destinies as degenerates.

In India, surfing bears no such stereotypes. Nope. In India, surfing is shiny and new. It’s “clean,” explains Surfing Federation of India President Kishore Kumar. None of the stigma leftover from surfing’s earlier and, some may argue, darker, days has accompanied it to the subcontinent.

SFI has held a few large surf contests and national championships. In May, the first ever Indian Open of Surfing, presented by All Cargo, was held at Sasihithlu Beach in Mangalore. During events like this, SFI prohibits alcoholic beverages on the beach and offers advice on how to respect and adhere to local values.

For example, Goa, which Kumar describes as an international “party town” on the West Coast, may accept the scantily clad bottle hoisters among us, but there are also places in India where a bikini would be offensive. Thanks, in part, to SFI’s measures, Indian surfing remains remarkably untarnished.

The result of this purification is an almost nationwide, mainstream embrace of the sport – and yes, in this instance, it is a sport. The Indian Open drew almost 15,000 people and 120 participants – including statesmen and celebrities.

Most people you ask will tell you that 70-year-old Jack Hebner, the “surfing swami,” brought the sport to India from his native Florida in the 1970s. It began to catch on fewer than two decades ago and the Mantra Surf Club, India’s first, was founded by Hebner in Mulki in 2004.

Kumar, 28, has been surfing since 2000 when he stumbled upon it by way of Hebner’s ashram in Mysore. He visited the swami’s meditation center and practiced bhakti yoga with his father (a non-surfer) on a weekly basis for nearly a year.

“I got really interested and said, ‘Okay, I want to live this life,’” Kumar explains. “[I wanted to] do something different than everybody else. I dropped out of ninth grade and joined the ashram. I basically moved here full-time. [Hebner] started taking me, my brother, and a couple of others on road trips to go visit temples and to the beach. [We] were some of the first Indians to start surfing,” Kumar says. “Now, the sport is growing.” 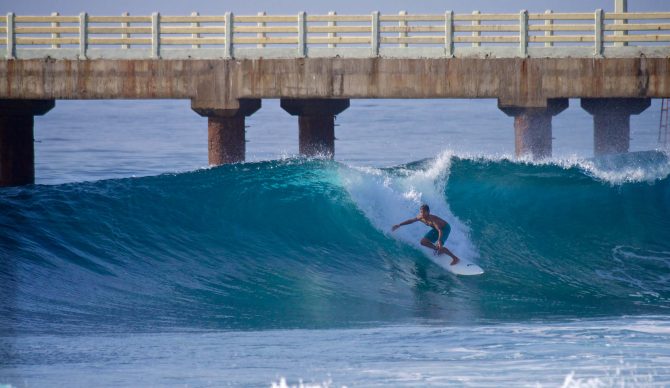 Kumar says that some states, like Goa, have seized surfing for its tourism value, while others are just beginning to flirt with the sport.

There’s a building interest in action sports more generally among India’s youth, who are looking for physical activities other than the traditional football and cricket.

“They want to try something new, whether it’s surfing, kayaking, river rafting, or hiking,” Kumar says. “They’re getting into these kinds of activities now – both men and women.”

For young women in India, surfing can still be an act of defiance. Aneesha Nayak, 15, told The Washington Post that her father worries about surfing interfering with finding a husband. “Marriage is not the only goal for a woman. What about other dreams?” she asked.

Despite India’s misgivings about women surfing, Kumar says that there are many women of all ages in the lineup in India these days.

Now, here’s the really interesting thing: Parents, who see this new surfing – surfing sans a semi-sordid history – as a sport rather than a lifestyle choice want their kids to participate.

“They feel very safe,” Kumar says. “They feel that it’s something really new and exciting for their kids to learn.”

These parents are even sending their children to prerequisite swim lessons so that they can, ultimately, become surfers. Upstanding, ocean-going Samaritans. Go figure.

The fact that Indian culture is rich with spirituality has fortuitously helped surfing to gain a foothold: Many feel that surfing is a spiritual, almost meditative experience in its own right. Indian surfers are also more connected with nature than non-surfers may be; it helps them to appreciate the environment in new ways. 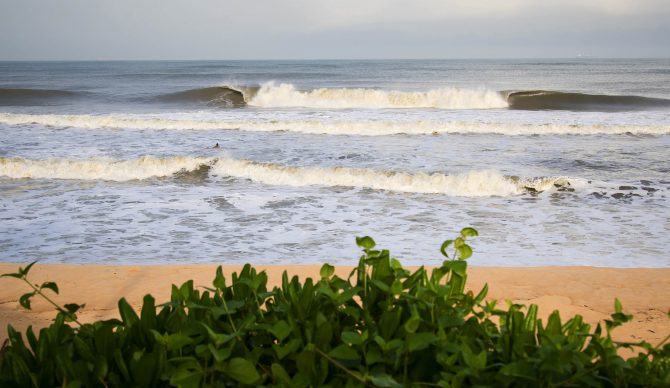 If you cross the Outer Banks with the North Shore, you get…India. Image: Rammohan Photography

One of the “hazards” sometimes associated with surfing in India is pollution: The region’s large cities are infamous for dumping refuse into their rivers.

“It’s definitely an issue,” says Kumar. “Especially at some river mouths that are located near big cities like Mumbai. There, people just don’t do any water sports – you just don’t get into the water. India is just now getting the infrastructure and [inclination] not to release plastic and waste into the river system, to keep it clean and respect the ecology. That kind of awareness is just coming into play. But if you come down to the south, the rivers have no factories on them and no sewage goes into them, contaminating the water. I’m on a river mouth – there are two rivers that come together – and we’ve been surfing there since 2004 and it’s been great. There hasn’t been anything… except plastic.”

Like in Bali, surfers in India are heading up an effort to clean up the waterways.

“Even at our beach, there is all of this trash that comes up, so we do these beach cleanup awareness programs,” Kumar says. “And we do go into the cities and tell them, ‘Please do not throw trash [anywhere except in trash bins]. A couple of things are working because this state and a couple of others just banned plastic bags. Things are definitely changing.”

Other perils of surfing India include small sharks and saltwater crocodiles in the Bengal area. The perks, however, are abundant. India has a coastline longer than the United States is wide (4,671 miles) and fairly steady ocean temps of 75 to 80 degrees Fahrenheit. The Indian Ocean is also incredibly powerful.

India gets the most swell during monsoon season and the months leading up to it (May through September). While there are established surf spots on both India’s west coast, along the Arabian Sea, and the east, on the shores of the Bay of Bengal, the southern states of Kerala and Tamil Nadu pick up a lot of the same swell as the nearby Maldives. In fact a few islands are really all that stands in the way of Southern Ocean swells that travel thousands of miles, gathering strength as they go, before breaking on Indian and Sri Lankan shores.

Australian surfer Joel Lester scored on a recent trip through the southern state of Kerala. He surfed Kovalam, home of India’s artificial reef (about which he remains skeptical), and Varkala, a paradisiacal beach town where the waves were pumping.

“The surf culture is just starting, but a lot of places are still pretty unknown,” Lester says. “There are a few surf clubs started by expats, like the Kovalam Surf Club (founded by Belgian Jelle Rigole in 2005). The rule is, if [the kids] don’t go to school, they can’t skate or surf.”

Rigole writes that consistent attendance at school has been the only thing he’s asked of his students, mostly local kids, since he began teaching them to surf. Kumar estimates that there are 15 to 18 surf schools in India now.

“Surfing in India – it’s unique [because there are] so many different languages and different states, so it’s that much more exciting for the sport of surfing,” he says, “And it’s a young sport. Everybody is thrilled to see this new sport growing in India.”

Kumar, who has helped to build a surf industry in India, owns a new apparel brand, Thunder Monkey, and a company that distributes imported boards, among others. Given the opportunity to surf anywhere in the world, he’d still choose his home country.

“There are places in India where no foreign tourists are allowed to go. I would choose those places,” he laughs. “I’m guaranteed that no one’s going to be there to surf except me and my friends. I have found places like that and taken groups of surfers – they were blown away by the quality of waves.”

“It is an unexplored territory,” he continues. “It all depends on the season, [but] pretty much 12 months of the year, you can go somewhere in India and surf. If you go to the right place, you’ll definitely get waves.”