Is This Goodbye to the Bintang? Indonesia Might Ban Alcohol 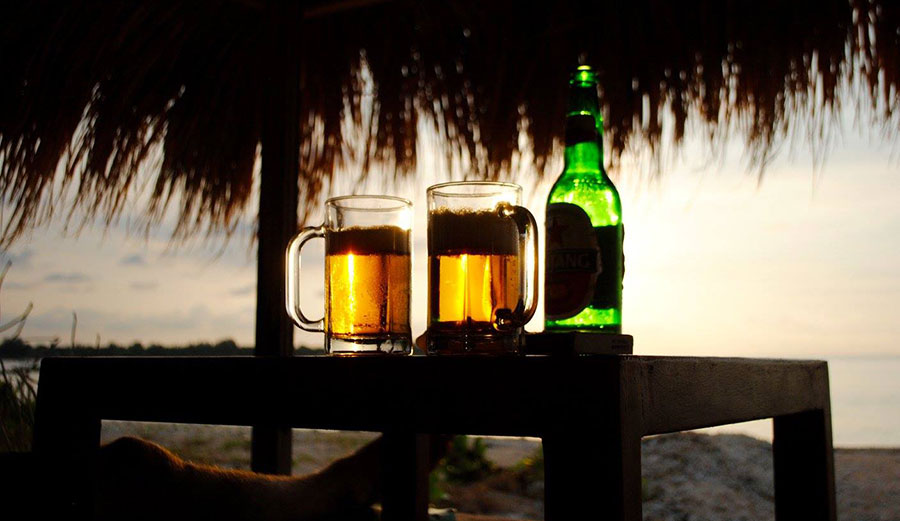 To many, this is part of Bali. But that might change. Photo: Stevie Lindquist

I don’t really remember the first time I went to Bali. It was years ago, and I know I spent a month there sandwiched in between two very foggy (not for the weather) months in Thailand. I know I had way too much fun, I know the waves were amazing in Bali, and I know we drank a lot in both places. Like, a lot. Many travelers do when they go to Bali. Perfect waves, icy Bintangs sweating in the sun, nights full of sweat and things you’d never do at home. It was so much fun. It is to Australia what Mexico is to the US, party-wise, at least. But that might all change with an alcohol prohibition bill that’s being proposed.

Back in April, I spent a month in Bali with my girlfriend, Stevie. It was incredible, as Bali with a beautiful girl is. The air there is different–it’s like velvet on your skin, wet and fragrant, full of color and life. Days pass slowly, late mornings with strong coffee, easy lunches, hectic scooter rides full of smog and horns, while nights often pass by in a blur of booze and laughter. It was a very different trip than the first time I was there. Just as good, but in a totally different way. We didn’t party very much, I didn’t surf very much, and I actually saw Indonesia, unlike the first time. It was eye-opening–nearly every trip I’ve done has revolved around surfing and partying. In doing so, I completely missed out on everything else. That’s not to say that Stevie and I didn’t drink–we did, quite a bit–but the trip didn’t revolve around partying. It revolved around traveling and each other’s company.

The proposition to ban alcohol in Bali is causing a stir among the tourist community. The bill, still in its early stages, is sponsored by The United Development Party and the Prosperous Justice Party. Both are, somewhat unsurprisingly, Islamist parties. Although Bali, unlike the rest of the predominantly Muslim Indonesia, is mainly Hindu, alcohol is similarly frowned upon. And you know what? As much as I like drinking, it kind of makes sense.

Stevie and I spent a glorious few days floating around the Gili Islands, a postcard perfect archipelago including Gili Trawangan, Gili Meno and Gili Air. While Meno and Air are tiny, quiet places, Trawangan is a straight up party island, at least along one side. For those who’ve been to Thailand’s Koh Phangan, home of one of the largest full moon parties on earth, you’d find a similar experience at night: everyone is loud and drunk, surrounded by beauty being destroyed by all the loud drunks. As part of Lombok, the Gilis are mainly Muslim. It was hard to watch the roving bands of drunken frat boy types–Australians, Americans, and Israelis, mostly–stumbling down the cobblestone streets, leering at equally drunk women, their sun burned skin sloughing off their shoulders, traces of sunscreen crusted at the sides of their nostrils, clove cigarettes hanging from their lips.

It was hard to watch because, unless you were part of their group, it was impossible not to notice how insulting it must be for those Muslims or Hindus that call the place home. And while tourism is a main source of income there, that doesn’t change the fact that a thousand drunks vomiting up guts filled with liquor into the sand every night wouldn’t be an affront to their religion or their sense of decency.

The bill’s purpose, according to the draft, is to “protect citizens from the negative impacts of alcoholic beverages, to raise awareness of the dangers of the beverages, and to ensure order and peace in society, free from disturbances caused by consumers.” Which, from a societal perspective, sounds all well and good. But it’s not quite as simple as that. Since Indonesia makes a shitload of money off tourism and tourists love to drink, there are a lot of jobs associated with booze. CSIS, the Centre for Strategic and International Studies, estimated that nearly 2000 people “with direct connections to the alcohol industry” would lose their jobs if the bill is passed, while another 128,000 jobs in surrounding industries, like restaurants and hotels, would be in jeopardy.

“If the bill is passed, our business will be done,” Indonesian Hotel and Restaurant Association head Hariyadi Sukamdani told the Jakarta Post. “The tourists drink alcohol all the time. It will be very inconvenient for them if they can’t find alcohol.” And he’s right. If (especially) Australians can’t drink in Indonesia, the brunt of them are going to go somewhere else.

As it stands right now, the Indonesian booze industry makes just over Rp 5.7 trillion (about $430 million US) a year, and pulls down another 6 trillion Rp  in excise taxes. Then, of course, there’s the boot-legging that’s inevitably going to take place. Look at prohibition in the ’30s, for example.

On that first trip to Bali (the one I can’t remember), we spent a few days on Nusa Lembongan. Since it was a decade ago, the tiny island had next to no booze on it–a disaster for four traveling 20-somethings with very thirsty livers. We found it, though. An old lady poured rancid boot-legged arak from a gas can into a dirty water bottle for us. She made it in a shack, and whatever it was, it was something a lot different than alcohol. If a total ban on alcohol–save for religious ceremonies and medicine–came to fruition, it’s almost a sure thing that boot-legging would skyrocket. And boot-legged liquor means methanol. Methanol means death, at least in some cases. I’m reasonably sure that what the shack-lady gave us was full of methanol, and I’m not dead or blind, so not in all cases. But in the last few years, there’ve been more than a few methanol-related deaths and illnesses on Bali.

It’s a tough thing to take a side on–as a tourist, of course, I’d hate it. If I were a resident and a practicing Muslim or Hindu, I’d love it. But what if it affected my wallet, my family’s wallet, and the entire wallet of my country? Would my religious beliefs trump all that?