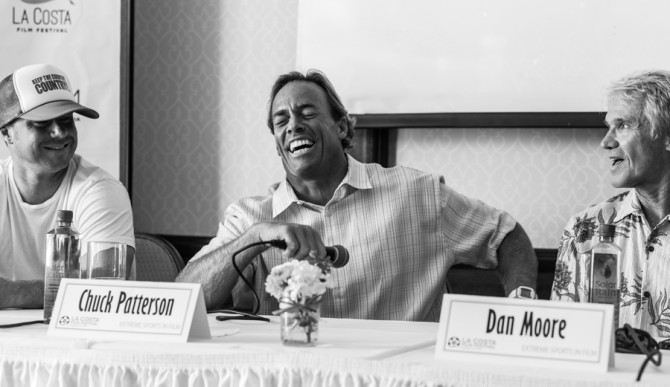 The legends live down the lore. Photo: Chris Brake

A couple Saturdays back, I was lucky enough to be given the opportunity to moderate an “Extreme Sports in Film” panel at the La Costa Film Festival in Carlsbad, California. This festival is only in its second year, yet they were still able to put together a top-notch festival including an epic panel of ”Extreme” Sports athletes and filmmakers. The panel consisted of cinematographer/photographer Erik Ippel, multitalented athlete Chuck Patterson (who wave-skied Jaws), big wave surfer and Producer Dan Moore (2005 XXL winner: 68’ Jaws), Director Mike Horelick (Signal Hill Speed Run), and Director Phil Waller (The Essence of Surfing). Even though the panel started at 11 a.m., and we had seemed to overindulged on the festival’s wine sponsors the previous night, everyone seemed excited to chat about “extreme” sports.

But after asking a handful of these questions while continually referring to how “extreme” our “Extreme Sports Panel” was, Chuck Patterson brought up a good point. What does it really take for a sport to be considered an “extreme” sport? He went on to say: “When I was growing up we didn’t look at it as an extreme sport, it wasn’t something big. It was just something we did.”

Which I guess is easy to say if you’re the guy who has surfed massive Jaws on skis — but the fact of the matter is: why isn’t being an NFL linebacker considered “extreme”? Seems pretty extreme to me, especially with recent $765 million concussion settlement. How about driving on the NASCAR circuit averaging speeds over 200 miles per hour? Also sounds pretty “extreme” to me. And I’m sure Dan Moore would agree that his numerous big wave wipeouts stories he was so kind to share with us — after the uncreative “what’s your scariest brush with death?” question — feel less extreme then going at a few rounds with Mike Tyson. Director Phil Waller and Cinematographer Erik Ippel both spoke about holding tight for the perfect shot until the last possible moment before the crash of a massive wave was upon them. It sounds extreme, but I think my chance of survival is far greater out there than in any UFC ring. But everything is relative, and what is extreme to you may be ordinary to me.

One thing they all seemed to agree on was that they really don’t consider their passions or jobs that “extreme” — more of a lifestyle, an obsession, and a hell of a lot of fun.

What do you think? 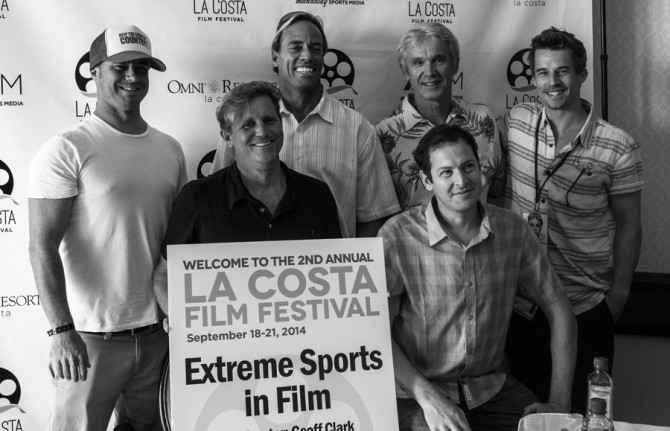 The crews all there. Photo: Chris Brake

With that last comment in mind, take a look at Something Kreative’s 2014 La Costa Film Festival submission, below.