Italo Ferreira: From Carjacked at Gunpoint to World Title Contender 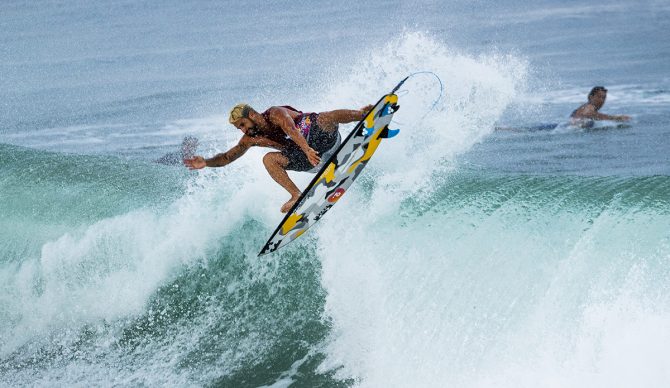 Italo Ferreira was held at gunpoint and carjacked in his hometown a few years back. Now, he’s staring down the barrel of a World Title run. Photo: Kelly Cestari/WSL

When commentators, pundits, and peers try to explain the continuing success of Brazilian surfers in the WSL you hear a lot of buzzwords like “passion, hunger, and drive.” It’s indisputable that Brazilian surfers are passionate, hungry, and driven, but so is every pro on tour. What sets many South American surfers apart from their American, Australian, and European brethren are the issues they deal with after they find success. When Julian Wilson goes home to the Sunshine Coast of Australia, he’s not worried about getting kidnapped or robbed at gunpoint, but for Gabriel Medina in Maresias, Adriano de Souza in Guarujá, and Jadson Andre in Natal, these are real concerns. Their friend Ricardo dos Santos was killed in 2015 by a police officer right across the street from his home in Santa Catarina. Filipe Toledo moved his entire extended family to California in part to escape the governmental corruption and threat of violence in Brazil.

Not too long ago, Italo Ferreira was the victim of violent crime in his hometown of Baía Formosa in Northern Brazil. Like most of his peers, Italo grew up poor. His father was a fisherman, and he struggled to find the funds for boards, wetsuits, transportation, and contest entry fees as a kid. One of his first purchases, after he started making money from contests, was a small Fiat Strada pick-up truck. That new truck, along with his talent and success, made him a recognizable figure in Baía Formosa. A target, actually: His new truck and three surfboards in the back of the vehicle were stolen from him when he was held at gunpoint while driving through town.

“The guys had a gun,” Ferreira told The Inertia. “It was a little bit scary. I’ve never been there [in that position] before, you know? It was crazy.”

“He was not hurt, and the car was never seen again,” his filmer, Marcelo “Dada” Pelosini told us.

So if you’re wondering what gives Italo that extra spark through his turns or that pop in his airs that just allowed him to win the first Red Bull Airborne contest of 2019, it’s not just that he’s got a “spicy” personality or a natural sense of rhythm and beat. He comes from a place where dangers are legitimate and pressing. Professional surfing is a job to a guy like Italo, and he takes it seriously–even though his personality is still remarkably playful and light (his disco roller skating cameo on Venice Beach in the Billabong Women’s “New Wave” video was epic.). But he grew up never once thinking of a backup plan. No preheat psych-outs or trash talking throws off a man who’s had a gun to his head, forced to give up something he’d worked hard to earn.

Italo won three events last year, and already has a win under his belt to start off 2019. He’ll win more. He’s good in all conditions, and I feel like he has a legitimate shot at a world title this year. His English isn’t great, but he tries hard in his interviews, and he always comes across as genuine, honest, humble and accessible. He did his best to give me the entire story. Without question, he is one of the most likable surfers on tour. But beneath the sunny exterior, he’s got an unbreakable resolve, hardened by the sometimes-rough experiences of his past.

Editor’s Note: Kyveli Diener contributed reporting to this story. An earlier version of this story misspelled the name of Ricardo dos Santos.