Jake Halstead on the Transition from Pro Surfer to Coach

Jake Halstead’s life-path has been far from conventional – even by sponsored-surfer standards. Competing regularly from age 12 onwards and sponsored by Billabong at 16, he seemed destined for the Championship Tour, getting second at the ISA World Surfing Games in New Zealand. But the move from the Pro Juniors to the Qualifying Series proved difficult, leading to discouragement, too many parties, and eventually losing his sponsor. Fast forward to a couple years ago, and Jake suddenly found himself expecting a child with his girlfriend. That changed things, letting him focus on something other than himself. Giving back to those on the path Jake once was on has been a big inspiration. He’s since founded a surf school in San Diego that caters to everyone — groms, beginners, and up-and-coming pros — and between that and family life, he’s been able to sneak down to Central America a few times to do some filming while picking up new sponsors.

You started surfing as a pro pretty young.

I started competing regularly when I was about 12 or 13. And when I was 16 I got second in the ISA World Surfing Games in New Zealand and that really kick-started my career from an amateur kid to thinking, “whoa I can really make a career out of this.” I signed a contract with Billabong. From there I started traveling, doing the full Pro Junior series, and I did pretty well. And then transitioning to the Qualifying Series I struggled a bunch. It’s a big leap from the Pro Juniors to the QS, and I had a couple tough years. I lost my sponsor, and that’s where I went down the road of just partying and not taking care of myself and I gave up on my pro surfing dreams. I was pretty lost. But all of a sudden I had a kid and that helped me really find myself in life and realize that there’s a lot more to life than just surfing and getting results. 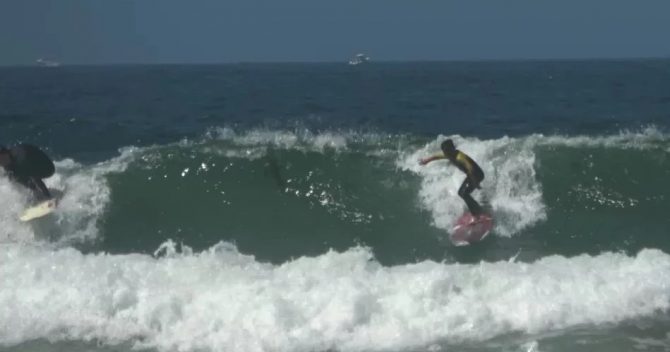 “It seriously gives me this natural high being around all these stoked kids,” says Jake. Photo: Beyond Surf SD

So do you feel like a big part of that transition was giving up the focus on yourself?

Yeah 100 percent. I was homeschooled my whole life, just because I was pretty much born and bred to be a pro surfer. That was all it was for me. So when I realized that wasn’t working I had no idea where to go. Pro surfing was all that I had. I never went to college. I definitely went through a phase where I just had no clue where I was going in my life. But then as I got older I realized that there’s so much more to life than just surfing. Surfing isn’t a team sport so it can be so easy to just focus on yourself.

But that’s when I realized I can take on some kids – there’s plenty of talent here in San Diego – and take them out to the beach, film them for two hours, critique their surfing, and that is really positive for them. They’re just so stoked on getting feedback and improving, and I love it too. It seriously gives me this natural high being around all these stoked kids, so that’s been huge.

Do you feel like your surfing has changed at all since your transition off tour?

Well, right now I’m actually injured so I’m out of the water, but in the last year I got picked up by Volcom and have been able to spend some time going on trips. I went down to El Salvador this summer and we’re going to put together a 20-minute edit from that (above). And I honestly feel like down there was probably the best surfing I’ve ever done in my life. Just getting fit and surfing because I want to surf. I think my best surfing is when I’m surfing just purely out of the joy and passion for surfing not because I have to get better or I have to get results or put together a video.

I’m a soul surfer at heart. I just love to surf, and I lost that feeling with needing to perform and feeling like I need to do this and look at what this kid half my age is doing, and so on. Yeah, it’s been cool for me to just come back to my roots and remember that I surf because I love to surf, and nothing’s going to change that. 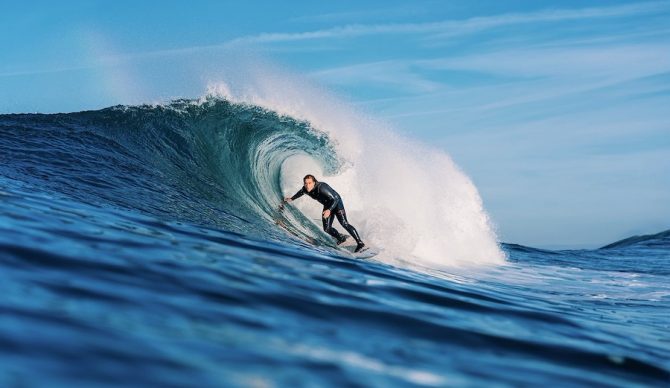 Jake, slotting in somewhere along the California coast. Photo: Beyond Surf SD

Give us the low down on the sponsor troubles.

I lost my main sponsor, yeah, which was Billabong. I still had other smaller sponsors supporting me but that main sponsor is how you get traveling – that’s your money. So when I lost that I got terribly discouraged, and probably surfed only 10 times that year. I only owned one surfboard, got pretty overweight, and just kind of lost myself. But then something just clicked when I got my fiance pregnant and realized I wanted to get back to being my healthy, happy self.

What were you doing during that time before you had a child? Was there any thought of the future?

I was kind of in a dark space with partying and not doing much else. I wasn’t bitter but definitely a little bit down on where my life was going and I was very lucky to get pulled out of that path. 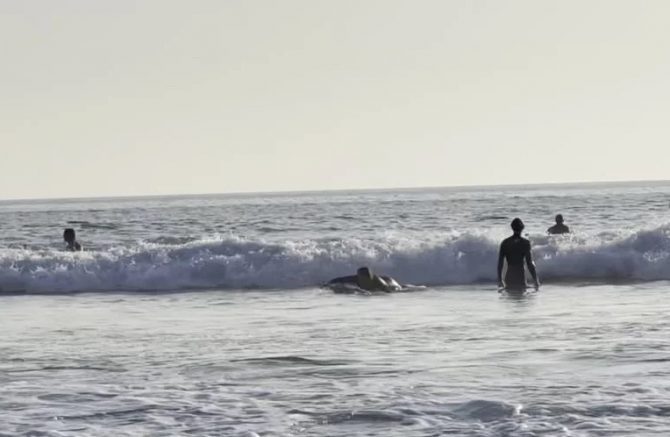 Beyond Surf SD is ready to take any surfer – beginner, grom, or aspiring pro – to the next level. Photo: Beyond Surf SD

Tough question, but if you went back and started again, would there be something that you’d do differently?

But I do think it is important for kids to understand that there is a life outside of surfing, and it’s not all about results. And if you’re not at that level but your friends are at that level and are getting sponsored, just remember that everyone’s different. And for me, I still think some of my best surfing is yet to come. And who knows, maybe I’ll get back on the QS in the next five years, I don’t know. But right now I’m just super happy where I am in life, giving back to these kids and coaching. The cool thing about my job is that now I’m my own boss so I could coach for a month straight, make some money and then leave for two months to travel or compete or whatever it is. So it’s nice to be able to kind of decide when I want to work, how much I want to work, and then, you know, if there’s a swell, I might be out of the office.

Editor’s Note: Jake’s surf school, Beyond Surf San Diego, is for anyone (grom, beginner, or semi-pro) who wants to improve. Check out the course offerings here. And stay tuned for Jake’s upcoming edit with more footage from his recent trip to El Salvador.