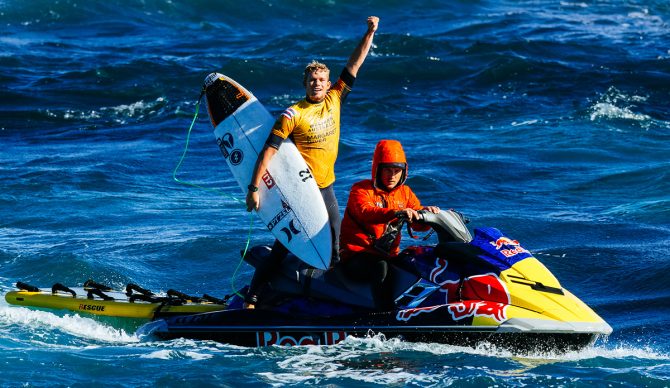 John John, stoked on another win at the Margaret River Photo: Cestari/WSL

Main Break turned into one helluva venue on finals day for the 2019 Margaret River Pro. It didn’t wrap up without at least a little bit of irony though, considering the entire event was close to the chopping block after a pair of shark attacks put an early end to the 2018 edition and sure enough, the women’s semifinals were put on hold thanks to a shark swimming through the contest zone.

Despite several shark-induced intermissions during the contest window, Main Break cranked out solid overhead surf on finals day, and John John Florence and Lakey Peterson both looked comfortable in the wind-blown waves. There was rarely anybody sitting on priority, making the contest super watchable, with sets rolling through all but about the last 10 minutes of the men’s final.

Kolohe Andino (still seeking his first event win) jumped out to a quick start against Florence, racking up a two-wave total of 11.17 before John John had a single keeper — a bit of a soft combo situation in just the first five minutes of the heat. Florence proceeded to put up a 9 and a 7.67 on back-to-back waves, completely flipping the table. He’d add another 9-point ride in the final minute but didn’t need it. Andino spent the rest of his heat chasing high scores he couldn’t quite find as Florence wrapped up his second win of 2019 (and second finals win over Andino this year) with 25 minutes left.

“I still think it’s pretty early in the year. Anything can happen,” Florence said. He’s not wrong. But the current wearer of the yellow jersey already leads by almost 6,000-points. Andino’s runner-up finish moved him into second overall in the rankings, which, oh by the way, puts he and Florence in the top two slots for 2020 Olympic qualification. Conner Coffin and Kelly Slater both need around 7,000 points to chase down Andino for that privilege.

But enough about the Yankees. Caio Ibelli’s making a solid bid early in the season for CT requalification. He wasn’t too pleased with being the odd man out in last year’s injury wild card triangle between himself, Kelly Slater, and Florence, and an equal third at Margs is going to be a result that  doesn’t let the Dream Tour get too far from him.

“Sincerely, I disagree with the decision, Kelly used and abused,” the 2016 Rookie of the Year wrote in an Instagram post back in December. He cited Slater traveling to surf 20-foot Fiji instead of entering the Keramas event, taking third at the Surf Ranch in September, then pulling out of France the next week as ways he abused the system. Ibelli got the chance to let his surfing do the talking, meeting both in West Oz, eliminating Slater in their head-to-head heat in the Round of 16 and giving John John a run for his money in a semifinal that was decided by just .5 of a point.

Lakey needed this win in a massive way, having slumped a bit to begin her 2019 campaign. “Rough competitive start to the season for me, but I love the challenge and I love how much you can learn from losing,” she wrote on Instagram after bowing out in Bali during the Round of 16 to Bronte Macaulay. Peterson beat the world’s best on her way to this win. She finally got past Steph Gilmore in the quarters, she beat Carissa Moore in the semis and  then Tatiana Weston-Webb in the finals –who looked fully in command, taking down Sally Fitzgibbons earlier in the day. It was a sweet win for the Santa Barbara regular foot who was well within her wheelhouse on the open walls of Main Break. Lakey sits just outside the top five in what has become a tightly-contested title run in the first half of 2019.

Next, the Tour moves to Brazil in less than three weeks for its fifth stop: the Oi Rio Pro.