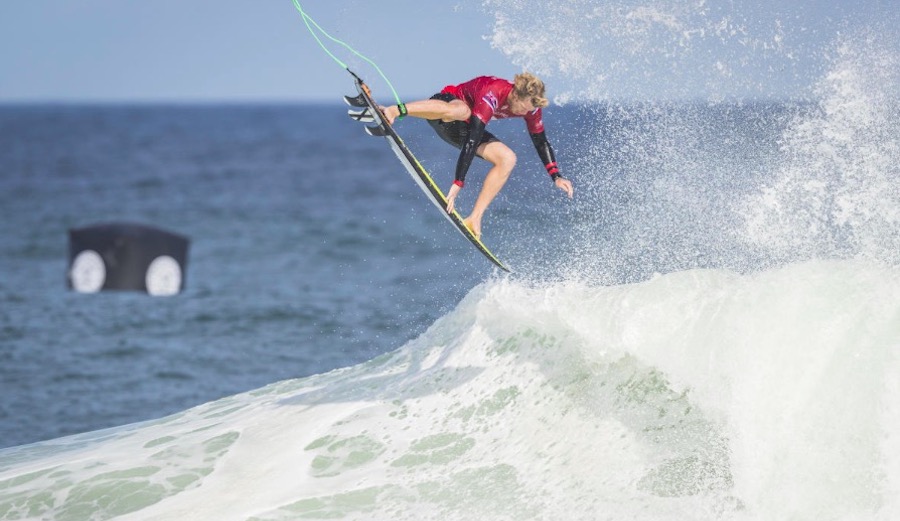 Will John John compete when surfing makes its debut in Tokyo? He definitely seemed to hint on Instagram Friday that he’ll try to accelerate his rehab to hold onto his slot. Photo: Poullenot/WSL

If you follow John John Florence on Instagram, you’ve likely followed him through his post-knee surgery rehab. You’ll also know that he’s now at the weight-bearing stage of the process. He’s made progress toward getting back to the level he was competing at before he was forced to bow out from this year’s WSL Championship Tour (in the top-ranked spot, I should add), though recovery, especially after a knee injury, is a long, sometimes windy road.

But, on Friday John John took to Instagram to post a video of himself downwind prone paddling with a cheeky if not cryptic caption: “Back in the water #tokyo2020,” it read.

If you’ll recall, back in July the two-time world champ announced he was “likely” out for the remainder of the season. His injury also paved the way for Kelly Slater, Conner Coffin or whoever the next highest-ranked American might be by season’s end to qualify for the Olympics. The only problem is, all those possibilities go out the window if Florence returns to the tour in time to stay the second-highest ranked American after the Billabong Pipe Pro concludes. After J-Bay, he remains third on the Jeep Leaderboard, and with five events remaining in the next four months, anything, as they say, is possible.

Coming back from knee surgery in just a few months is definitely risky. And using the newly-extended offseason to gain some additional footing and do more rehab is probably a safer bet. But, surfing doesn’t make its Olympic debut every day. There’s more on the line, in other words. So, will JJF expedite his recovery in order to keep hold of his Olympic slot? Stay tuned.