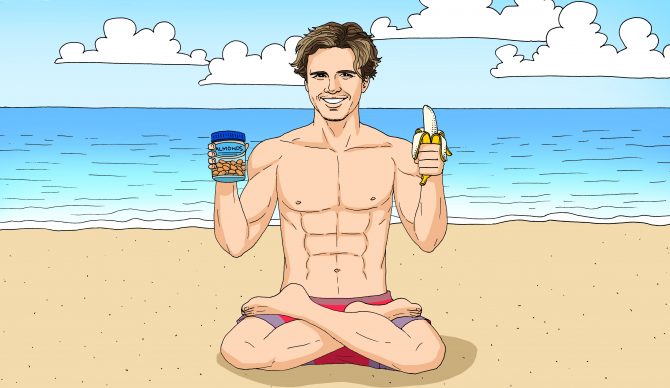 Julian Wilson is all about that almond and banana life. Dude keeps healthy and trim. Art: Gary L for The Inertia

Julian Wilson knows the top of the podium well. The Sunny Coast native has won at Teahupoo, Pipe Masters, and during his sophomore year on tour in 2012 he clinched a victory at the Rip Curl Pro in Portugal. But his win to start the 2018 WSL season at the Quiksilver Pro Gold Coast was different: this time, he was a father, and this time, the chips were stacked against him. Wilson was just five weeks into his recovery from a devastating shoulder injury sustained while mountain biking. Many were shocked he didn’t withdraw due to the injury. Following his fireworks final against fellow Aussie Ace Buchan, Wilson couldn’t even raise the trophy over his head. Instead, he balanced it on his shoulder and grinned ear to ear. Wilson redefines the phrase “dad strength” and the certainly the term “dad bod.” As such, we decided to take a look Wilson’s philosophy on fitness, nutrition, and mental strength in the first installment of our new series Champs on Health.

I first spoke to Julian about his fitness regimen in December 2017, when he was a world title contender heading into Pipe Masters. At that time, Wilson told us: “At the start of the year it was a lot of cardio fitness coming off the Christmas break and just getting fit and sharp again. Throughout the year, I try to just keep my body as open as possible: yoga, pilates, lots of stretching, lots of rolling out. Just consistently keep my body as open as it can be. [For cardio] I do a lot of stairs, do some similar training kind of like what soccer players do with the speed ladder on the ground. I do a lot of mountain bike riding.”

His eyes lit up when he talked about mountain biking — it was clearly a passion he loved. Emphasis on the past tense: when we caught up at Snapper Rocks following his event win, I asked if he still loved his mountain bike, and he responded in a quick, dad-like manner, “No. I can’t really afford to have those injuries. It’s a beautiful way to get outside, and I do have a lot of hobbies and things I love to do, but in the big scheme of things and my priorities and now having my first little baby, things are a lot more simple now. I don’t have time for that stuff.”

Wilson is a generally easy-going guy, so it makes sense that he’s flexible on the foods he eats as he traverses the globe. As long as it fuels his body and doesn’t slow him down, he’s into it.

“I’m pretty open about it. Traveling the world, it’s really hard to stay on any sort of strict regimen when it comes to food. I just try to eat healthy, eat right. I don’t lock myself into any specific category when it comes to that. The only time I’m strict with my diet is on competition days and that’s about it.”

“I eat bananas and almonds. That’s pretty much what I go to,” he said.

Following his event win on the Gold Coast, Wilson talked about how his wife, Ashley, went through her first pregnancy and birth with their new daughter Olivia. It put things in perspective – making the painful rupture in his AC shoulder joint seem small.

“Honestly, the birth of my first child gave me all the strength to just suck it up and come out down here,” Wilson said after the victory. “I got a lot of strength from her mum as well, that’s for sure. It’s definitely nice to make my family proud.”

For Jules, the healthiest way to live is through a quiet, simple life surrounded by the ones he loves. He said a balanced life with priorities in order is more important than ever.

“My wife just went through a pregnancy, so health and well-being are more important than ever. Going through that, you’re creating another human,” he said. “I live up on the Sunshine Coast; It’s a quiet lifestyle, and it’s very easy to be active and surf and eat good food.”

Stay tuned for our next installment of Champs on Health with Lakey Peterson.