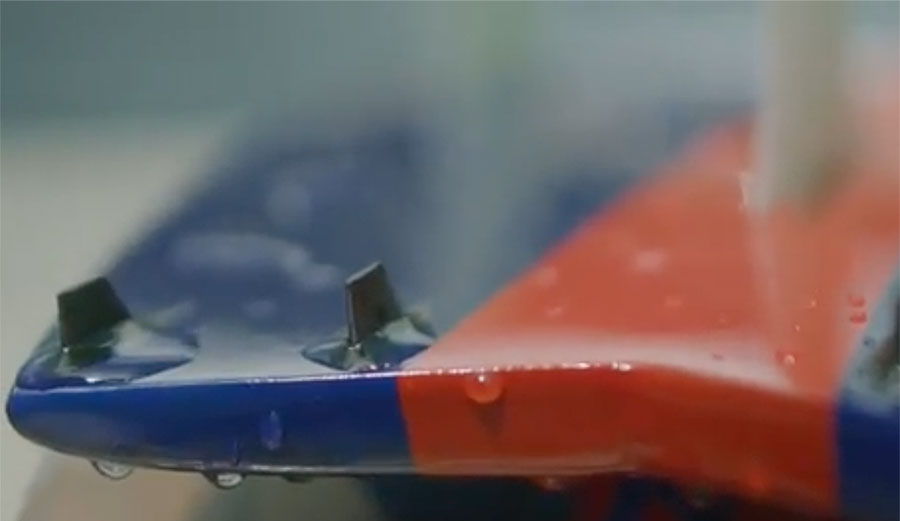 Kai Lenny’s at the top of surfing’s performance ladder. These little things help him stay up there. Photo: Kai Lenny/Instagram

A few weeks ago, Kai Lenny posted a video on Instagram. That in itself wasn’t all that strange, but on the tail of the board in the video, there was a row of tiny little finlets. Kai was raving about them. “Recently, the way I have been able to step up my game to the next level is thanks to the modern hydrodynamic advancements from @minksystems,” he wrote. “I have them on every board.”

That post, however, didn’t really explain those little finlets all that well, and since Kai Lenny is on the forefront of…well, pretty much everything in surfing, I figured a phone call was in order to find out exactly what Mink Systems is and how it works. And as it turned out, he had a lot more raving to do.

So what exactly are those things?

They’re game-changing, really. They’re called diffusers. If you look on the back of every fast race car — whether it’s a street car or a Formula 1 car — you’ll see these diffusers coming off the back. What they do on the fastest cars on the planet is take that air flow, that turbulence from the car, and it makes it go straight. We applied it to surfing, with obviously a few adjustments, and the results were pretty crazy.

If you really think about it, a surfboard’s never fully engaged with the water. There’s air and water running down the bottom of the board, so there’s a lot of turbulence. That means there’s a lot of drag. When you have these diffusers off the tail it takes that turbulent water and it straightens it. What it allows you to do is go faster and throw more spray because the water’s coming off in a straighter line. The speed of it is crazy because the profiles of the Minks creates a little bit of lift in the tail, so you’re essentially riding your board at a more level position, versus always being back on the tail ever so slightly, which means you’re displacing a little bit of water. It’s allowing your board to be hydrodynamically more efficient.

Does it feel like a bunch of extra fins?

The coolest part about it is that you don’t feel them working as a fin whatsoever. It doesn’t feel stiffer or trackier, it just feels like the board is able to work the way it was meant to work. I notice it a lot in chop. It’s so much more stable. I don’t have to worry about my board spinning out because of the turbulence going through the fins.

Where do they come from and who’s making them?

This shaper from Oahu who works with my coach, Doug Silva. His name is John Parks. His surfboard company is called Korps Surfboards. He’s an amazing underground shaper from Makaha. He designed them. He’s been working on them for a few years, just getting them perfect. They brought me in to test them—to kind of finish the testing process.

When did you first try them?

I rode it the first time at Haleiwa. It was choppy, there was a lot of current through the Toilet Bowl, and I was cutting through chop and going so fast, I literally could not even believe it. You know, I knew they were working on something, and they wouldn’t tell me until they’d gotten their patents or whatever. They didn’t want other people to see that it was on my board until then.  So there was all this build-up, and when I finally got to try it, it wasn’t underwhelming at all. It totally delivered. Ever since I’ve been using them, whether it’s in giant waves or in small waves, I swear, it’s helped me with pretty much everything. Not just on the mental level—on an actual performance level. Every single one of my boards has them now.

My first thought was that it looked a little gimmicky. What was your first reaction?

When I first saw it, I thought it was freaking sick. I watch Formula 1, and if you look at the cars, they have these little winglets that are so tiny. But when they break off from hitting a curb or another car, it completely changes the car’s performance. I’ve always known those little things affect a lot. In big wave riding, I’ve been working on my fins a lot. Like with quads: I’ve been putting my bigger fins in the back and the smaller fins in the front. I know how very minute changes in water can have significant outcomes. Also being involved with the hydrofoil — you know, you change something one millimeter and it completely changes the whole thing. I’ve been told that if you’re going 100 miles an hour out of the water, that atmosphere is equivalent to going ten miles an hour in the water, so there are giant effects that come into play. I notice that the faster you go with these things, the smoother and better they get. You forget that something so subtle can make such a big difference. Now I notice when I don’t have it on my boards. I bog a little more; I don’t have seamless speed. So I knew there was going to be something to it, but I didn’t realize it was going to be that profound.

Who else is using them?

Carissa Moore has it on all of her boards now on tour. Filipe has tried a bunch of them in Australia, and he was psyched on them. There are so many people who want to try them, but we don’t have enough yet. Hopefully, by the end of the summer, those guys will have it in production.

Every single person who has tried them has been like, “oh my God, my board feels like magic.” I’ve had a board that I didn’t like and was going to sell, but I put the Minks on and now it’s one of my favorite boards. I’m kind of baffled. I don’t even know why I’m promoting it this hard, because I have such a huge advantage with them.

Do you think they’ll be commonplace in the future?

I think it’ll be someone’s disadvantage not to have them, no matter the conditions. As soon as they’re available, all the tour surfers are going to want to have them. Surfing hasn’t had a major development in so many years. If you look at moto racing or a lot of other sports, any advantage you can get can have a huge outcome. In Formula 1, if you’re not on the cutting edge, you’re going to be left behind.

There seems to be more aversion to progress in surfing than in most other sports. Why do you think that is?

I think it’s just kind of a cultural thing. Like, “what are you doing bringing in something new? Surfing is for the soul.” Surfing is for the soul, but even more so when you’re having more fun. I’ve even had people tell me when they see me with the Minks, “why are you taking the soul out of surfing?” I’m like, “what the heck are you talking about? I’m surfing an hour longer now; I’m going way faster. I would say my soul is more complete!” There are totally times when I wouldn’t have made waves if I didn’t have them. I can honestly say that.

How do you stick them on your board?

It’s pretty easy. They come with a template. Depending on the size of your board, there are three different sizes: small, medium, and large. You lay this template down and line it up with the stringer and draw little lines. Then you sand the board a little bit, stick them on with epoxy, and in ten minutes the thing is solid. If you really don’t like them—and I haven’t met anyone who doesn’t—you can get them off pretty easily and your board is back to normal.

How exactly are you involved?

Since those guys are my good friends, I’m basically just helping them with the testing and asking for hundreds at a time (laughs). Every time I get a new board, I ask for more. It’s not something that is necessary unless you want to go faster and throw more spray. It’s a performance enhancer. I’d say the equivalent in the car world is like if you got a chip for your car and you got an extra 100 horsepower out of it. It’s not necessary, but once you have it you wouldn’t want it any other way.