Kai Lenny’s Secret Weapon Is His Ability to Think Critically 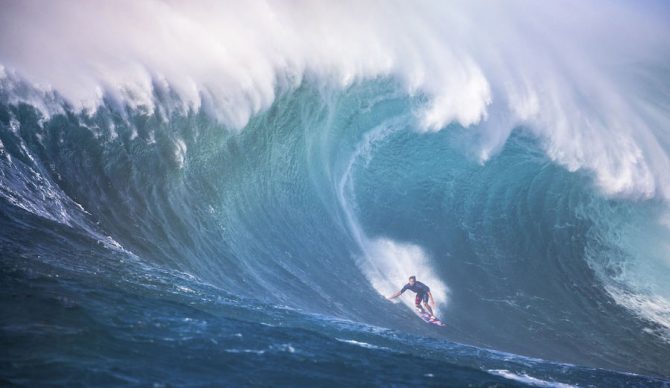 Without a doubt, there’s something special about Kai Lenny. Not just what sets him apart from the average surfer, but what sets him apart from the other “best surfers in the world” as well. In the course of a single conversation last month Kai told me about his plans for the day that involved at least three different water sports with the option for a half-dozen more depending on wind and wave conditions, laughed about death-defying feats at Nazaré and Maverick’s, and made two different analogies between different sports that changed my perspective.

And I hardly need to say that Kai can walk the talk, too. His achievements speak for themselves, and over the course of our conversation, he wasn’t really bragging so much as just stating the facts, albeit in a very cheerful and stoked manner. So our conversation got me to wondering – what is it that makes Kai great? Where does his “X-factor” come from? 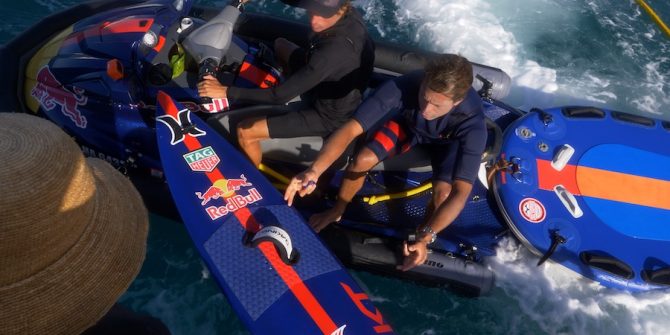 Board handoff – it truly does take a village to make big-wave surfing possible. Photo: Red Bull.

He’s got tons of support: from his sponsors at Red Bull, Hurley, and Nike to his family and community on Maui that have fostered his growth as a waterman. But while it might take a village, it takes a bit more than just the village – if you had dropped me into Kai Lenny’s life as a child, I doubt I’d have turned out the same. On that note, there’s no doubt Kai’s a physical animal, but then again, what pro surfer isn’t? It certainly takes more than just physicality to make it to where Kai is today. You could point to his competitive drive, but again, what pro surfer doesn’t have that? And Kai is more than an “average” pro surfer.

I believe Kai’s X-factor is his critical thinking. It’s his ability to draw analogies between different sports, pick apart his own performance at a certain wave or on a certain piece of equipment, see how it applies to a different sport he’s doing, and come up with new and better ways to do it all as a result. More than just being an athletic prodigy, Kai has a strongly analytic mind that lets him analyze his own performance and figure out how it applies to other scenarios.

His ultimate goal is “to become the best big wave surfer I can possibly be,” he told me when we chatted. “The best big wave surfer in the world,” he added, almost as an afterthought. “But you can’t go out and ride big waves every single day, so you’ve gotta find ways to simulate it. I would say that short boarding in small waves is one way to get your technique really dialed. When you get on a big wave you have all the time in the world whereas in small waves, you have very little time. With foiling you get the sensation of speed and control and you’re able to surf basically any condition good or bad. Adding on the wind sports, you get the training in speed through chop and for flying through the air. So all these other sports have really helped me excel in big wave riding.” 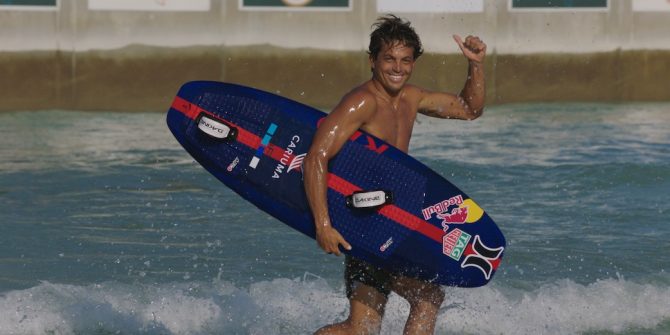 The analogy between snowboarding and big wave surfing is another prime example of Kai’s synthesis of boardsports. “Some of my favorite athletes are snowboarders,” Kai says, “it’s just crazy to think that these guys are doing 1620’s and more when in surfing we’re barely doing one rotation. It’s for obvious reasons, like how waves aren’t perfect ramps of snow you can hit every day, but I just see it as this insane opportunity to use what these guys are doing on 8,000-foot mountains and apply it to 50-foot waves in the ocean.”

“It’s all been about changing my perspective,” Kai told me. “It’s not a perfect comparison, because your stance on a surfboard is further back than a snowboard, you have 20-knot winds going up the wave faces, and your landing is a wave moving 30 miles-per-hour, so at a certain point you just have to pull back, let it fly, and hope for the best.” It may not be a perfect comparison, but it’s getting closer – just take a look at the board he’s riding at the Waco Surf Park with Ridge here (or pictured above). “It looks more like a snowboard than a surfboard,” Kai said about when he first saw the board in person, and I’ve gotta agree. 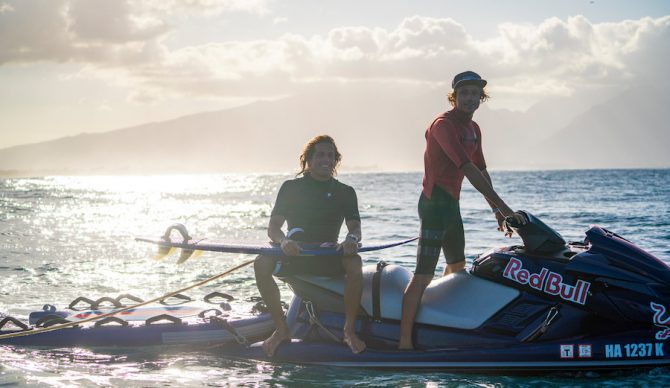 Speaking of Ridge, another point of comparison for Kai’s analytical mind is his younger brother. The two could not be more different. Whereas Kai is exuberant and chatty, Ridge is much more reserved. But when he does speak up, as he did in our conversation for The Inertia Podcast, he has some really insightful thoughts about the sports they practice. “I think a lot of the criticism that tow-in surfing gets is that it’s a crutch,” Ridge told me. “Which it is – you’re getting whipped into waves with a machine… but we like to see it instead as a springboard or gateway to the next level of what’s possible on big waves.”

Ridge’s nickname has become “The Sleeper” because of how his unassuming nature belies his high performance out on the ocean. “Having people that want to beat you and you wanting to beat them really turns you into an athlete that you could never become on your own,” Kai says. “And I want my brother to be outdoing me, because it’s just going to fire me up to want to try and outdo him.” 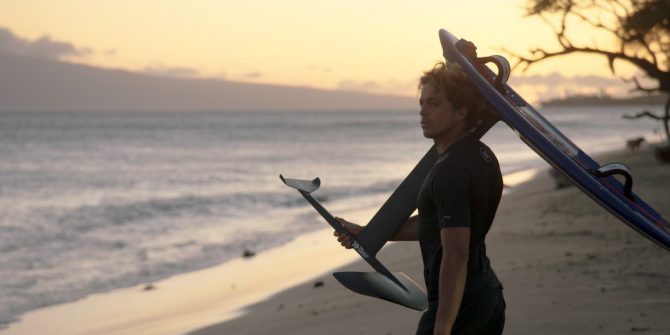 “With a foil, you can manufacture all the speed you need for maneuvers,” says Kai. Photo: Red Bull.

As well as his big wave surfing, Ridge works with The Hydrofoil Company, a research group dedicated to optimizing hydrofoil performance for various applications such as open-ocean swells, kiting, winging, and more. The connection between foiling and big waves is a theme that’s come up with Kai a lot recently. “The waves were maybe knee high and I was doing these cutbacks while imagining that I was shortboarding,” Kai said while telling me about a recent foil session at Kahului Harbor. “It’s crazy, the reps I’m able to get on my foil in comparison to surfing where you’re limited to how good the wave is. With a foil, you can manufacture all the speed you need for maneuvers…I do think that I’m only at the level that I’m at because of the other sports that I practice,” he concluded. 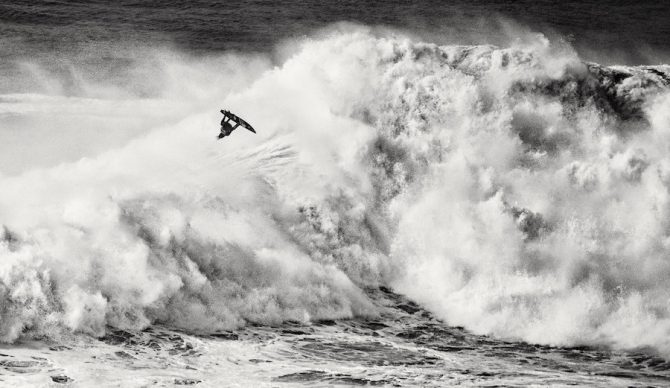 Overall, it’s pretty plain to see that there’s a lot of different factors that contribute to Kai’s big-wave prowess, but it takes Kai’s critical thinking and ability to draw comparisons to bring it all together. “That cross-pollination of disciplines is what allows him to imagine performance levels on giant surf that no one else is really dreaming of,” says author and journalist Daniel Duane. “He wants to keep pushing. And pushing himself is essentially pushing surfing,” adds big wave pioneer Dave Kalama.

This season’s final episode of Life of Kai drops on YouTube May 27. You can find the entire season, here.