Advice From Kassia Meador: What Comes After the Foamy? 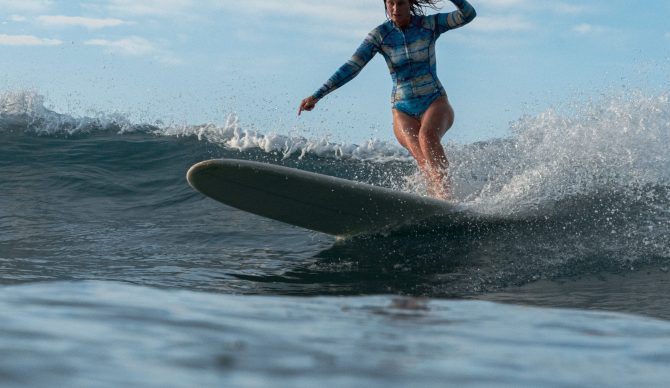 Editor’s Note: If you’re interested in learning to hang five, ten, or heels from one of the world’s most stylish longboarders in 35 video lessons, check out Kassia Meador’s Definitive Guide to Longboarding 2.0 here. The Inertia readers get a 10 percent discount with code WELCOME10.

“Hey, I already had my foamy, I’m ready to move into a different board, but I’m not totally ready to either choose to log or choose the shortboard.”

Are you at this point in your progression as a surfer — having honed those basic skills on a foamy and now you’re ready to move on to new equipment (and new ways to ride waves)?

I think that having a board with a little bit of rocker on it and a board that’s lighter, even if it’s a nine-footer is really helpful. The last thing you want to do is have something that’s too heavy and feels cumbersome for you, especially as you’re just getting into surfing.

Getting it a little bit lighter so you can maneuver around or carry it to the beach easily are really helpful in this next intermediate phase. You’re not at a skill level where you’re nose riding quite yet, but it maneuvers like this that you want to start exploring. You’re just starting to turn. You’re just starting to get everything going and as a result, you want a board that’s going to feel loose enough and stable enough to support you this stage of your surfing.

So, this still begs the question: what should you be riding after the foamy?

I would suggest something that’s not much bigger than 9’0″ for the most part and is light enough to carry around under your arm. Hopefully, this second board doesn’t feel overbearing for you and has just a little bit of a nose kick (rocker) to combat pearling. It’s also loose enough to progress in your turning and maybe even walking the nose.

This board is light and even designed for the versatility of somebody who is just starting to turn and hasn’t decided which path their surfing goes down next. A true log, maybe? I would suggest a single fin or a “chilled-out” tri-fin. To give an example of what this would look like, Donald Takayama makes a board called In the Pink. You can ride it as a single fin. You can ride it as a tri-fin. It has a square tail so it’s a little bit easier to turn. It has a little bit more nose rocker so it doesn’t pearl as easily.

The second-board selection is a tough decision because there are so many great boards out there. Getting away from the heavy glass jobs with that second board and just progressing to your first hardboard as a surfer is important. You can go that way if you want to start logging later, but you’re really fine-tuning your skills with this board. It’s more helpful to have something that’s maneuverable, easier to move around on. You can still walk. You can still turn, you can get it down to the beach, and it’s just a little bit more chill.