Kei Kobayashi Is on a Mission to Surf on the World Tour; Don’t Bet Against Him

Editor’s Note: This feature is supported by WHOOP.

Before noon, the 22-year-old San Clemente native has burned more calories than many Americans burn in a week. If you’ve stumbled across his Instagram feed, you’ve probably noticed that the guy is on a mission. He weighs around 140 pounds soaking wet, and he’s regularly setting personal bests on his deadlifts above 400 pounds. His discipline, and his positive attitude are relentless. Kobayashi’s rationale is simple; he’s got an ambitious goal, and he needs to work hard to accomplish it.

“My biggest goal is to be on the World Tour at the end of the day. Any way I can get one step closer to my goal, I’m going to try to achieve that.”

In the last six months, Kobayashi has added another weapon to his arsenal: WHOOP. The personalized digital fitness and health technology seems tailor made to assist a driven athlete like Kobayashi. A match made in heaven.

“It tracks my recovery, my sleep, and how much stress I’m putting on my body,” says Kobayashi. “Understanding the impact of my training and recovery in real-time is huge as an athlete.”

We met up at Kei’s local gym, DSC Performance in San Clemente, located right by Terry Senate and a host of shaping legends, to get a sneak peek at the up-and-comer’s drive. Sure enough, he busted through a series of side-splitting calisthenics mixed with weights and agility exercises tailored for surfing. He barely broke a sweat before sliding over to T-Street where he stomped a tidy air reverse with dry hair. Man’s on a mission.

The day before we connected, Kei said he trained hard: multiple gym sessions and multiple surfs. To keep sharp, he’s learned that prioritizing his shut eye has become an equally important part of his regimen. Bedtime is almost always in the single digits. Last night? Eight PM.

“Some days aren’t as perfect as others,” says Kobayashi. “You can still do the work and go through the motions if you have to, but never quit on yourself. At the end of the day, I want my body at 100 percent.” 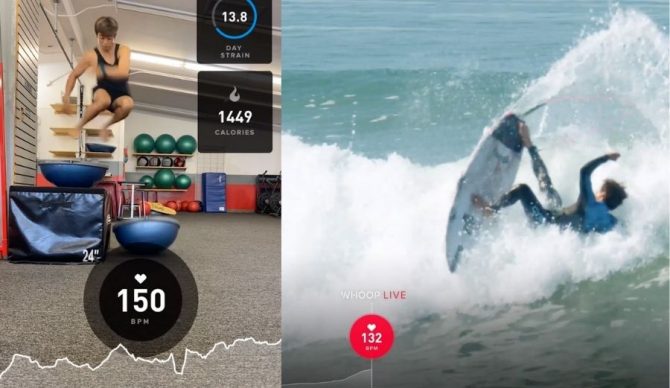 Saying Kei Kobayashi keeps active is a bit of an understatement. Photo: The Inertia/Trautwein