Kelly Slater Burned John John Florence at the Pipe Masters: He Told Us Why 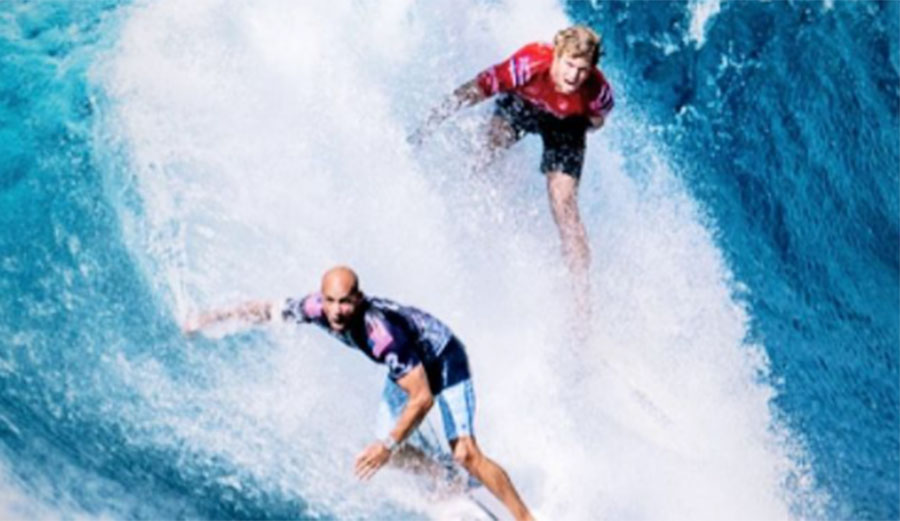 Just a coupla pals palling around on a Backdoor runner at Pipe Masters. Image: Instagram/screenshot

Kelly Slater is nearing the half-century mark. He’s 48 years old now, an age where a lot of folks are staring down at a big fat belly while doddering carefully around their lives on creaking knees. Backs aching from decades at a desk, pop-ups slow and jerky when and if they go surfing. The days when they moved like oiled cats stretching in the sun are dusty memories, left somewhere on a beach along with their flat bellies, unbloated yet by time and alcohol.

But Kelly. Belly flat! Mind sharp! Knees free of cracks and pops, joints moving like they’re coated in graphite powder! At 48 years old, Kelly Slater is still mixing it up with the best surfers on earth at the best wave on earth. Not only is he mixing up with John John, Italo, and Gabriel, but he’s burning them. Did you see that burn? The one where John John had priority and Kelly just shrugged and said, “Screw it, I’m going!”? Kelly took the barrel and the interference, and he took them happily. I reached out to him to see what was going through his head when he decided to go on that wave. Turns out it was just a bit of fun between two old friends. Granted, it was a bit of fun in a heat at the Pipe Masters, but Kelly surfs on a different plane than the rest of us.

“John and I are friends,” he told me. “The heat was a done deal. I told him that since he got that last priority, if one comes we are going party wave. With 30 seconds left there was no other option for me. I think they underscored it (7.8) and I maybe should have had priority in the final minutes but I had a blast.” Earlier, he expanded on that thought a bit via Instagram. “People don’t think you can have fun and compete,” he said. “Fuck ’em! John John Florence and I like to have some fun.”

On watching said burn, my first reaction was a little shrug and a grin. “Oh Kelly,” I thought. “You sly old dog, you!” It wasn’t a burn when it mattered. Nothing was on the line, because John already had the heat in the bag. For the most part, judging by internet commentary, anyway, most people shared my shrug. But then I thought, “What would have happened if Gabriel Medina had done the same thing under the exact same circumstances?”

While it’s impossible to know for sure, I’m relatively certain public sentiment would have been notably darker. The crowd on the internet would have rushed in like a batter charging the mound with a mouthful of broken teeth from an errant pitch. Bloodlust in keyboard form. Sparta keyboard warriors with foaming mouths, etcetera, etcetera. But when Kelly does it, we (the collective and generalized we, of course) shrug, smile, and say, “Oh Kelly, you sly old dog, you!” Why is that? Slater weighed in, and he’s likely correct. When it’s obviously all fun and games, people pick up on it. It’s when something real is on the line that people get mad.

“I think when you can feel the joy of what competitors are doing in the moment,” he explained, “it doesn’t sidetrack people into picking sides. Maybe people realize it’s just what we love to do and the expression is as important as anything. John seemed to be in the flow and there’s nothing you can do about that but be happy for them and try to find your own place amongst it.”

This time, this burn, speaks volumes to the fact that underneath all of Kelly’s competitive savvy, underneath all those heat smarts, Kelly Slater, a 48-year-old 11-time world champion, is still at his core just a frothing grom who loves to surf with his friends and wants to party wave — even if it’s at the Billabong Pipe Masters.