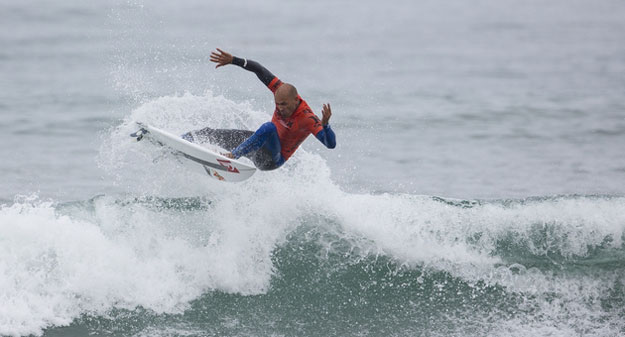 Kelly Slater was eliminated in round three for the first time in four years at Trestles. Photo: ASP/Kirstin

A week or so ago I proclaimed from behind my computer that Kelly Slater would win this year’s Hurley Pro at Trestles. I claimed it loudly. I was rightful in my prediction however; I had the numbers to back it up.

But alas, on the third day of competition I’m eating my words.

I look like a righteous jackass, thanks to Kelly losing. The guy wins 11 World Titles and he can’t win one measly contest when I say he will. What will people think of me now?

But as I sit seething over Kelly’s loss, two heats later the Great Bald One is in the booth with Sal Masakela and Rob Machado doing the only thing he does better than surfing: talking about surfing.

When they ask him what it’s like have the whole town of San Clemente cheering for his demise on the beach, Kelly easily replies, “I know they aren’t cheering for my demise, they’re just trying to lift Pat up.”

Before Kelly leaves the booth, Sal asks him what this loss does for him.

And Rob his right. He should know as much as anyone, having been a part of the Momentum generation with Slater – and being on tour with him. Just ask anyone about “The High-five” at the Pipe Masters, and they will tell you Rob knows Kelly as a competitor.

But Kelly losing to Pat really does mean something for this year’s World Title race, especially with Mick Fanning winning the next heat. Kelly already has a thirteenth and a ninth in his score line before result. Reigning world champ Joel Parkinson has two thirteenths and a ninth in his. Mick Fanning’s worst scores are two fifths, and although he hasn’t won an event this year, at this moment, his consistency shifts him into first place in the race. Surfers are allowed to drop their two lowest places in the World Title race.

Beyond this year’s world title sits something else: Kelly’s pride. Slater is arguably reaching the end of his career, though he would have you thinking otherwise. When he won his last title, we were all sure that he would exit the ring, and ever since then everyone is asking him the same line of questions.

When does it end? When is it enough? What number of Titles will satisfy you?

He always dodges these questions with diplomatic answers that placate the interviewer without really reaching a conclusion.

The truth is this: Kelly wants to go out on top. We won’t know when until it happens, but there is no doubt he’d like to retire a champion. If it were to be this year, Kelly may have to work a bit harder. Fanning is in a better spot heading into the European leg.

But numbers and losses aside, Kelly is a winner. I could spout statistics from contest wins, world titles or heat scores, but in the end Kelly always comes out on top. He can win in any size or style of wave and he is capable of turning himself on at any point. Slater may be down and out this week, but come September 26 at the Quiksilver Pro in France, he could easily rise to the top.

And I look forward to it Mr. Slater, I’ll be rooting for you.