Kelly Slater: ‘Olympic Qualification Is On My Mind’ 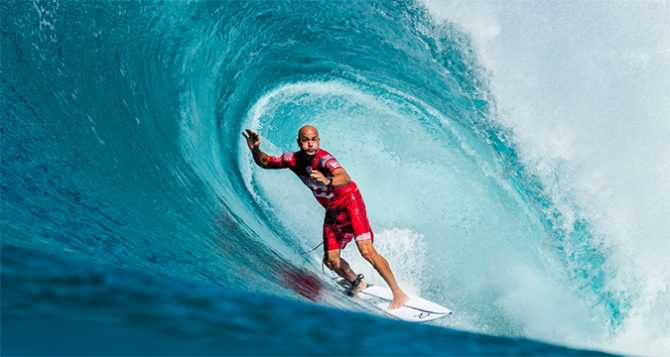 Kelly Slater’s an interesting cat. Everything he does and says begs for a little bit of reading between the lines and jumping to conclusions. He appears to be fully committed to World Tour competition again, a full 18 months after folding his foot in half at J-Bay and taking back-to-back injury wildcards to secure his spot among the top-34. And that should create its own fair share of drama between the CT’s Easter weekend kickoff and the 2019 Pipe Masters for two reasons:

He upset at least one guy by the way he went about securing that 2019 wildcard, and you don’t have to be a tin-foil-hat-wearing flat-earther to swallow the idea that taking it easy in 2018 was a strategic move to stay fresh for this year’s Olympic qualification process.

“Olympic qualification is on my mind,” Slater just told the New Zealand Herald earlier this week. “There is a chance I could retire at the end of this year, at least from full-time competition, but if it looks like, or if I feel like I’m going to make the Olympics, I’ll probably end up trying to do that next year.”

So what does Kelly Slater qualifying for the Olympics look like? According to the IOC, World Title aspirations aside, he’s essentially competing against seven people on tour this year: Conner Coffin, Kolohe Andino, John John Florence, Sebastian Zietz, Griffin Colapinto, Zeke Lau, and Seth Moniz. His job is to finish 2019 ranked ahead 0f, at the very least, all but one of those surfers. Only one (Coffin) finished in the top-10 in 2018 with the others ranked in that order to start 2019. And you could safely assume John John will be a top-10 lock if he stays healthy. And the last time Slater was healthy for a full season (2016), he also finished in the top 10.

The WSL rankings are the top qualification criteria in the IOC’s hierarchal order. Their website says this:

–2019 World Surf League (WSL) Championship Tour (CT): The first 10 eligible men and first eight eligible women at the end of the season obtain a quota place on their countries’ teams.

So Kelly may retire after 2019, he may not. He may make a serious run at Olympic qualification, or he may not. We may see a lot of him on tour this year, we may not. The guy still knows how to keep us on our toes.