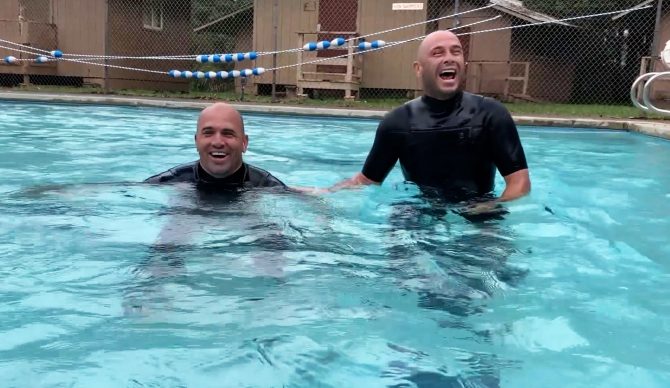 “Instantly, even after one session, I feel a little bit of a confidence boost,” said Kelly Slater. Photo: The Ocean Warrior Course

While on the North Shore this winter, big wave surfer Mark Visser was a kid in a candy shop. He had a chance to put a diverse group of surfers of varying skill levels (from me…read about that experience here to Kelly Slater) through the paces of his Ocean Warrior Course with the objective of providing a fresh approach – one that’s as cerebral as it is physical – to serious surf. Developed with Shane Dorian, Brian Keaulana, and some of the world’s elite watermen, the Ocean Warrior Course is designed to teach important ocean skills that benefit surfers of all skill levels. So when Kelly Slater showed up for class, it was certainly interesting to get a sense for his experience perspective.

After testing out the course with good friend Shane Dorian, Slater posted the following on Instagram:

@shanedorian and I trying to simulate drowning each other in a controlled environment with @mark__visser showing us the ropes of the @theoceanwarrior course he has developed through years of working with military and free divers. It’s very surf specific to show you how to relax in stressful situations without the help of fins or masks, how to trust your training and oxygen levels during long hold downs and bad beatings, and a long list of other simple to follow instructions you can study and train online with a partner or a few friends. Good holiday gift. Thanks to Mark for giving us a starting point to understand all this stuff better. Coupled with Shane’s inflatable tech, your chances of drowning are about as minimized as can be in big surf. Thanks to everyone gathering intel on water safety allows surfers to push their personal boundaries and ride the biggest waves on earth. It’s been a sight to see the past decade and doesn’t seem to be slowing down anytime soon.

Visser also had the opportunity to catch up with Kelly post-workout to get his candid thoughts on the course and ocean safety more generally. Here are excerpts from their conversation below.

So what struck you about the course?

A lot of the stuff you’ve been doing seems like it’s been pretty quiet in the surf world. It was more behind the scenes with the SEAL guys and military guys. So I figured you were cross-pollinating between what you needed and what they do in the water, and that seemed like a pretty good mix. A good recipe.

Do you think your experience with the course will change your training in the future?

It will [change how I train]. That’s present tense.

I think what you’re doing is taking bits of knowledge from free divers, a lot of different water people, and applying it very specifically to how it would feel to be a surfer. No mask. No fins. Trying to simulate out of control situations with someone else helping you. Timing yourself. Getting that quantitative difference between trying one thing and trying another thing. Instantly, even after one session I feel a little bit of a confidence boost. I haven’t surfed a big wave in a year or two years. I don’t know the last time I surfed a big wave. (Well…Tavarua) I wasn’t super game, because I hadn’t been in the water surfing big waves. I just wanted to be there and catch a couple waves. I haven’t been super game since probably two winters ago to even look for a big wave. I just haven’t been active, because I’ve been injured. I can already picture myself in situations and applying the confidence from one session.

What benefits do you think might exist from the course?

Calming yourself especially in the lead up to somewhere. A big day of Pipeline I wouldn’t say is giant surf, but, still, it’s intense and you have to stay calm. At Pipe, there will be some sizable waves, and I think applying that confidence of being calm ahead of time [will be helpful]. It’s just one thing less to worry about. It’s like having your fins on your board already. You don’t have to worry about putting your fins on. They’re there.

How could it be applicable in your everyday surfing? Not just a big wave scenario?

I think you could apply this a lot. I think there are things you could apply very specifically while you’re surfing small waves. I don’t have a certain thing in mind exactly. The mindset you go into surfing small waves. Being aware of getting winded after a wave. How you’re paddling back out. The way you breathe while you’re on your way back out or sitting there waiting for a wave.

How do you think the course could benefit average surfers?

Anything that can just help you have confidence in the water and make you calmer in the lineup around other people is a good thing. It doesn’t matter if you’re surfing big waves. It really doesn’t have to do with big waves. It seems like what we’re doing is maybe more specific to surfing big waves, but it can be applied to anything and any lineups. Sometimes being calm in a lineup is just being calm around other people.

Why is it important to get trained both in techniques but more in CPR rescue and basic first aid practice?

I think that’s a given. I’ve pulled a few people in myself not really knowing much over the years, even. The last couple years I’ve worked with the lifeguards a little bit. So to pick up an unconscious swimmer by yourself on a jets ski. Or know how to pull him on a surfboard. Those kinds of things are just so critical.

You saw Evan Geiselman got saved a couple years ago by a bodyboarder. Luckily he had fins, and he knew how to hold him in the water to keep his head above water. You never know when you’re going to save someone’s life. I’ve saved a number of people. I’ve also missed somebody before, and he died right in front of me. I was seventeen. At my local beach, the waves were only about head high that day, but there was current and there were rips, and this guy got stuck, and I’m positive I could have saved him had I seen him. I just wasn’t aware of everything in my situation that day…You never know when that training is going to come into play.