Kelly Slater Wave Co.’s Battle for the Olympics Isn’t Over Yet; Here’s Everything We Know

It's the WSL and KSWC who have everything to lose.

I imagine at some point in the process of finalizing their Olympic bid circa 2012, the Tokyo 2020 marketing team gathered in a conference room with whiteboards on every wall and set their intention. After an earthquake and tsunami devastated the country in 2011, the tagline had to scream optimism. After hours of brainstorming, the marketing director’s hands caked in whiteboard marker ink, the team arrived at a two-word motto. “Discover tomorrow.” Ironic of course, because tomorrow can never be discovered. Tomorrow only becomes today until it is yesterday, and tomorrow still evades us, but that’s not the point.

In September 2013, Tokyo won the bid to host the 2020 Games and began assessing how it would leave its mark on the Olympics. What would the Olympics of tomorrow look like, anyway? New sports to attract younger fans, apparently.

By September 2015, Tokyo 2020 announced a shortlist of events selected for their “youth appeal,” namely: baseball, karate, skateboarding, climbing, and surfing.

Two months later, Kelly Slater and his eponymous wave company dropped a historic little video. It was the first glimpse of what a team of engineers had been working on for years – the 11-time world champ’s vision for a perfect artificial wave. Immediately, speculation bloomed. Could this tech rescue surfing’s imminent Olympic debut from the scourge of a potential flop if conditions fail to cooperate? Surely if the Olympics are ever hosted in a landlocked city, artificial tech will be the only way surfers can compete, right?

Speculation about Kelly Slater Wave Company and the WSL’s continued efforts in Japan have prevailed ever since. That is until the Agence France-Presse published an interview with International Surfing Association President Fernando Aguerre late last month in which Aguerre stated, “With the support of the ISA, the IOC and the Tokyo 2020 organizers have determined that surfing will take place in the ocean in Tokyo, at Tsurigasaki Beach in Chiba.” Numerous outlets glommed on to the message as a final nail in the coffin for artificial wave whispers.

But let’s not be too hasty. For one, Aguerre has been towing the official position of Tokyo 2020, the Japanese Olympic Committee, and the IOC – that surfing will happen in the ocean – from the beginning. The ISA has always couched such statements with their support of wave pool tech, as well. When I spoke to Aguerre in March, he essentially gave me the same quote. It was so unremarkable, in fact, that we made the decision not to publish the interview. There was nothing new.

We also know both from an interview WSL CEO Sophie Goldschmidt gave to Sports Business Daily and from Kelly Slater Wave Co’s business license obtained by The Inertia by way of Japanese outlet THE SURF NEWS that KSWC is currently hard at work constructing a wave pool somewhere in the prefecture of Chiba in time for the Olympics. The company’s principal advisor in Japan, Brian Nelson, elected not to comment on this story. He did, however, give a presentation to a class of MBA students at Doshisha University in Tokyo back in February and was candid about his involvement in KSWC’s dealings in Japan, but not the dealings themselves.

“Brian spoke here about his long-time entrepreneurial efforts in Japan to our MBA students interested in entrepreneurship.  He did mention that he was now advising for Kelly Slater Wave Co., but said that he could not go into details beyond what was listed on the KSW website,” said Philip Sugai, professor of the class in which Nelson spoke.

And while a spokesman for the WSL declined the opportunity to comment for this article directly as well, when asked plainly if they’re still optimistic their wave company would become an Olympic venue, there was no mention that the door on the issue had officially been closed. 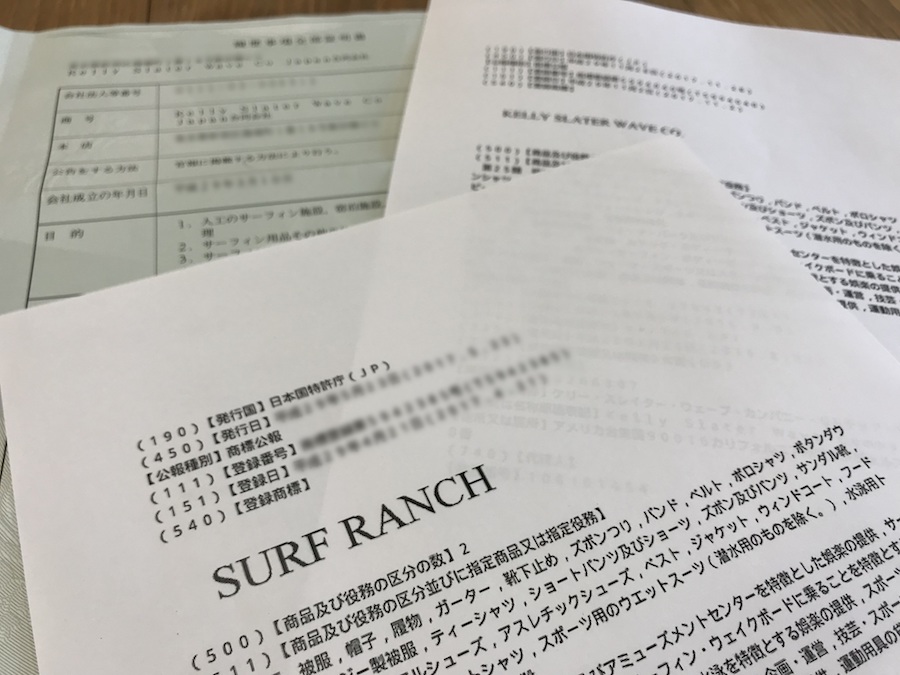 Still, without an up-and-running pool (neither the WSL nor their man in Japan would tell us the current stage of construction), the WSL’s efforts to lobby Olympic decisionmakers have so far been unsuccessful. Tokyo 2020 confirmed, for instance, that Goldschmidt unsuccessfully sought to schedule a meeting with them in March – presumably to clue them in on the upcoming Founders’ Cup and to pitch Surf Ranch tech. The WSL claims to be unaware of this meeting.

Sources in Japan also explained that there’s another big hurdle: cost.  According to one source, KSWC and the League presented Olympic decisionmakers with the price structure for construction and use of the facility during the Games, which organizers deemed to be too expensive. Especially compared to the ocean, which creates waves for free with zero use of electricity, it’s understandable why the JOC, IOC, and Tokyo 2020 would be skeptical. It’s unclear if that’s why Aguerre went on record re-emphasizing that surfing would happen in the ocean. 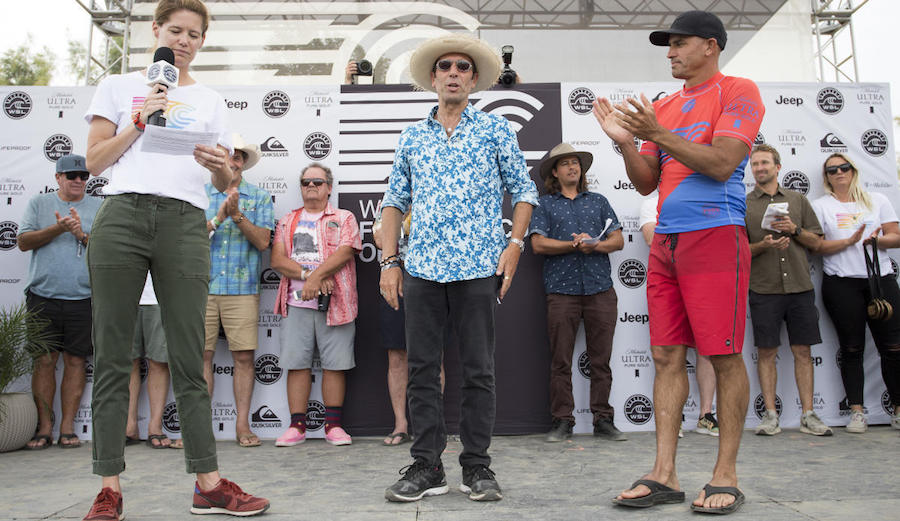 The WSL’s fearless leader Sophie G honors ISA President Fernando Aguerre for his contributions to surf and for having the best hats at the Founders’ Cup. Photo: WSL

At this juncture, it’s the World Surf League and Kelly Slater Wave Company that have everything to lose should they be unsuccessful in convincing the Olympic powers that be that surfing’s Olympic debut would be better suited to their wave tank. In her interview with Sports Business Daily, Goldschmidt also mentioned the WSL’s interest in, among other locations, France. The WSL tells us they are currently scouting locations. Without a doubt, the intention in France is the same – to be surfing’s Olympic venue for 2024. Serving as the technology behind the 2020 venue would give KSWC a legacy advantage heading into 2024. “It’s likely to be the lasting impression of the Tokyo 2020 Olympics,” Goldschmidt told Sports Business Daily. If surfing does happen in the ocean in 2020, though, the WSL and KSWC will have to outbid projects like TERRE D’EAUX (which has licensed Wavegarden’s Cove tech and is currently under construction in the Parisian suburb of Sevran) and countless others likely to crop up, which could be difficult.

The WSL continues to heap the onus of Olympic surfing at a Japanese Surf Ranch on the IOC, JOC, and Tokyo 2020. And while it is true that Olympic leadership will ultimately decide, it is up to the WSL and Kelly Slater Wave Company to make an attractive proposal for their technology. Given the official line is that surfing will take place in the ocean, it’s clear that so far they have not. And as the summer of 2020 approaches, time is ticking.

Come 2020, a perfect artificial wave will spin in Chiba prefecture. Whether it’s an official Olympic venue or a Japanese tourist attraction, however, will depend entirely on the determination of the WSL’s ambitious CEO and crew. That, and how quickly they can dig.

Special thanks to Marika Sonoda, editor at THE SURF NEWS, who contributed to this report.