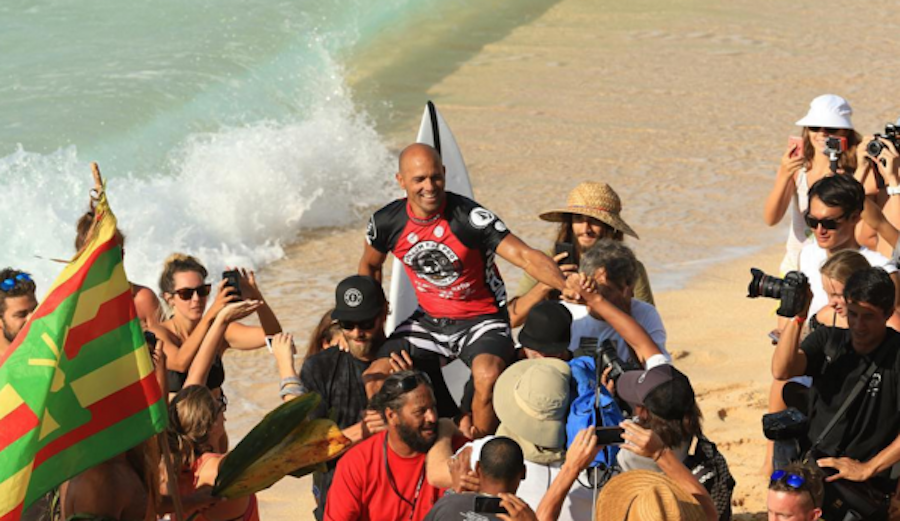 King Kelly hoisted up the beach after a solid win to start off the 2016 season. Photo: Volcom / Jack Morrissey

Today was Groundhog Day. And it sure felt like it at Pipeline, or at least the Hollywood-imagined version of it with Bill Murray.

After a full day of picture-perfect Pipe on Monday, the flawless conditions continued through Tuesday. It was unreal; a rare occurrence for anywhere in the world, let alone Pipeline, to be that good for two consecutive days. But it happened.

Three perpetual Pipeline heavyweights battled their way to the finals – Bruce Irons, Kelly Slater, and Jamie O’Brien. And then there was the darkhorse, Makai McNamara. The 20-year-old son of North Shore legend Liam Mcnamara was an event standout, competing against surfers much older and more experienced than he (Kelly once surfed against Makai’s father out at Pipe).

In the Semifinals Makai was given an interference after dropping in on Tom Whitaker. But he came back, the fire lit under his ass, pulling in for a Perfect 10, and tossing a bras d’honneur (up-yours!) towards the judges tent. That launched him into first place for the win. And in the finals he came out the gates strong, posting a 8.67 on a bucking bronco left. But later he went over the handlebars on two of the craziest waves of the day, breaking a board each time, and never regaining momentum.

Bruce Irons was looking like his old self all event long, locking in on a few harrowing Pipe barrels, and a couple nail-biter Backdoor bombs. Although the crowd favorite, Bruce couldn’t put it together in the final, coming in at fourth place. But it marked the end (beginning?) of an amazing comeback season for Bruce. His eyes swelled with tears as he was honored after the event with the Todd Chesser award.

And Jamie O’Brien, the freakshow himself, wasn’t able to find the cartoonish tubes he’s known for. He was, however, able to in Round 4 with a Perfect 10; a freight train of a wave, which earned him $1,000.

But no one could touch King Kelly. After a drought of competitive drive in recent years, Slater seemed to be coming back into his own…and at the ripe age of 43. He was untouchable in the final, and throughout the entire event, putting the rest of the surfers in a combo situation.

People always speculate whether Slater will hang up the WSL singlet. He’s the eldest on Tour and has won every accolade the sport has to offer. Yet he never appears to be fully giving up on contests. Could this be the confidence boost he needs for a World Title push in 2016?

“Well this is the first contest I won in two years,” Kelly said after the Final. “And the last [contest] I won was this one, so…”