Kelly Slater’s Outerknown Launches ‘The Only Gun You Need’ Collection 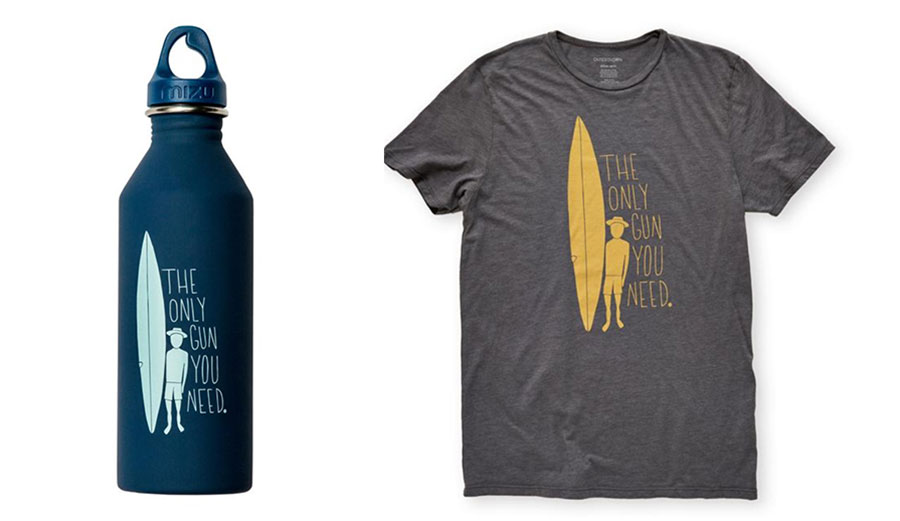 Kelly Slater’s Outerknown just waded into the gun-control quagmire with a collection called The Only Gun You Need. Obviously, they’re talking about a big wave gun. “Outerknown was founded with the simple mission of making life better for People and Planet,” reads the website. “That’s why the brand is donating 100% of all profits from ‘The Only Gun you Need’ T-Shirt and water bottle to Everytown, a 501(c)(3) fighting to end gun violence.”

According to the website, “Everytown is a movement of Americans working together to end gun violence and build safer communities. Gun violence touches every town in America. For too long, change has been thwarted by the Washington gun lobby and by leaders who refuse to take common-sense steps that will save lives.”

Gun control has been a hot topic in the United States for a long time, mostly because people get shot a lot in the United States. Like, a LOT.  I grew up in Canada, for the most part, and have owned guns and shot guns and killed things with guns. I used guns after taking government-mandated courses that taught me how to use guns. I bought guns after taking government-mandated courses that allowed me to buy them. I had a pretty little .22 and an even prettier .30-06 bolt action that were both useful firearms for what they’re meant for. I’m a supporter of hunting—for food, not for sport. It’s a complicated issue in the U.S., though. Second amendment and all that, as oddly-punctuated as it is. A well-regulated militia, being necessary to the security of a free State, the right of the people to keep and bear Arms, shall not be infringed. From our cold, dead hands, blah blah blah. Don’t get me wrong—I’m not saying people shouldn’t be able to have guns. I’m just saying that if you’re going to own something that kills people, you should have to take a few courses on how to use it. Like cars, for example.

“Before you jump to conclusions or make assumptions,” Slater wrote on Instagram in a post promoting the collection, “I grew up shooting guns with my family. By the time I was 10 I could take guns apart and make my own bullets. Our dad had a shotgun rack full of guns in our bedroom from the time we were born. I don’t particularly have an issue with guns, I just like my surfboards better. The debate will probably never end but at least we can have it while we search out better options for responsible firearm access and do our best as a society to keep guns out of the hands of the wrong people while protecting our kids and communities at large.”

According to the World Health Organization, the US has one of the highest rates of firearms deaths in the developed world. In 2010, Americans were 51 times more likely to die with a bullet hole somewhere in them than people in the UK.

“Most American gun owners (two-thirds) say a major reason they own a gun is for their personal protection, according to the Pew study,” wrote Kara Fox for CNN. “However, the majority of America’s firearm-related deaths are attributed to self-harm. Gun-related suicides are eight times higher in the US than in other high-income nations.”

No one needs an AR-15, or any auto or semi-auto, for that matter. Not really. Sure, they’re fun to shoot at a target, but they were created for one thing: to kill people. Hell, the M1 Garand was the standard U.S. infantry rifle. If you showed up at some guy’s deer blind with an AR-15 and a case of beer and started strafing the woods, you’d get punched in the teeth. Like Rory Parker wrote, “the vast majority of hunters will admit: a second shot is embarrassing. A third is downright shameful. Four and above fall into ‘who-the-fuck-invited-this-bozo?’ territory.”

I get it, too. Blasting shit with an automatic weapon is awesome. Not awesome enough to keep them around in spite of the very obvious gun control issues in the US, but it’s awesome.