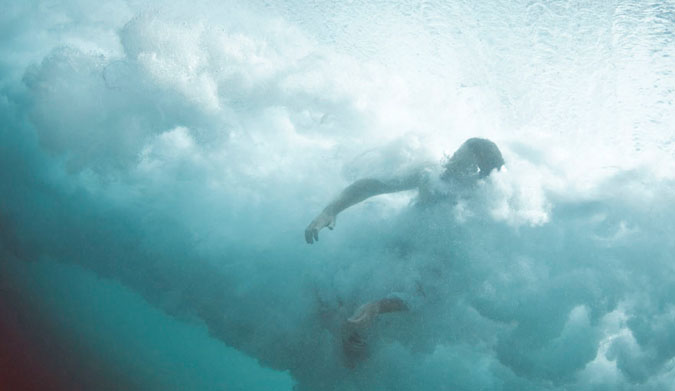 Dealing with failure is just as important as succeeding. Photo: Mark Tipple.

I’m on my way
with dust in my shoes
free of mythology:
send books back to their shelves,
I’m going down into the streets.
-Pablo Neruda

I’ve been getting way frustrated surfing recently. But instead of giving up all together, I told myself I’d redouble my efforts. Firstly, I changed my attitude. I decided that if I got out there and really tried my hardest and still failed, then it wasn’t something to get upset about. It simply wasn’t my time.

That was a fascinating decision to make, because it revealed that I hadn’t been trying very hard up until this point. The sessions after this decision were drastically different – I went for way more waves, stayed out longer, got beat up way more. In a word, I charged.

My boyfriend told me that learning how to surf is learning how to fail. This really struck deep. One of the most haunting things I’ve read in a long time was an article about a new study that came out that discussed children’s responses depending on whether you praised them on effort or ability. Praising on effort was telling the child that you were proud of how hard he tried. Praising on ability was telling the child you were proud of the actual achievement or talent/skill that seemed to correlate to the achievement.

I was “gifted” growing up, and needless to say, constantly praised on ability. And so I, as I’m realizing now, was raised feeling entitled, not ever really trying (what a sad but exciting thought, because who knows what will happen when I really try?), and giving up when it seemed I was not “naturally talented” at something.

Looking back, I can see multiple instances of this happening. I was the type of person that would start strong, but quit the minute it seemed like I wasn’t winning. For other people, seeing someone in front of them would inspire them to run faster; for me, it would have the opposite effect. I’d drop out. Failure was scary, and quitting was my way of avoiding it.

I really regress in the water. I have tantrums. I get so frustrated that I cry. It feels like some part of me that was repressed at age five is now being allowed to express its five-year-old self and begin to evolve, and hopefully someday soon catch up to my 31-year-old self. Seriously, it feels so weird to realize that in my entire life, I never learned how to fail. And I’m finally getting the chance.

I’m also finally, for the first time ever, digging deep. Pushing myself was never something I did, ever. I never developed those muscles. But for the last few sessions, when I felt like I was really, really done, I stayed. It’s hard, it’s weird, and it feels like you’re falling off the edge of the world. You’ve never gone that far. At first it’s a leap of faith –that there’s something there, that you have more to give. You’re really scared that you don’t.

The first time I ever really pushed myself with surfing was just a few days ago. We got out of the water, and I was super frustrated as usual. We were getting set to go home, but then I went back in. It was at the end of that second session, on my very last pop-up attempt, when I was feeling so tired and weak, that I stood up and rode. I wish I could describe the feeling – it was magical. I remember feeling a great defiance, and with it came a new feeling: the feeling of the fruits of perseverance. I’ve never really felt it before. It felt like invincibility mixed with gratitude mixed with disbelief mixed with a giant surrender.

So then, that was it. Before that, I was really tempted to quit, but then that happened and I realize how close I came to quitting too soon. And then, fortuitously, I came across an article where a ski instructor was sharing his secrets to getting good tips and repeat clients. He said he pushed his customers exactly 10% out of their comfort zone. More than that, and it’d be too much; not a good experience, too much fear. Less than that, and they’d feel like they hadn’t improved, hadn’t been challenged, wouldn’t get that opportunity to delight themselves.

So then I started quantifying pushing myself. I tell myself, “only 10%.” And little by little, 10% by 10%, I go into new places. Today I was really getting beat up by the waves, and the session was almost over. The old me would have just packed it in. But I asked myself to try. My 10% today was paddling back out to the line-up one more time. And I did, and then, there it was again – that addictive sweetness of succeeding not on merit, but on effort. The success that comes not from talent, or luck or skill, but from not giving up.

Another thing my boyfriend told me that stuck with me is that the only way I won’t learn to surf is if I give up. If I keep showing up, I will succeed.