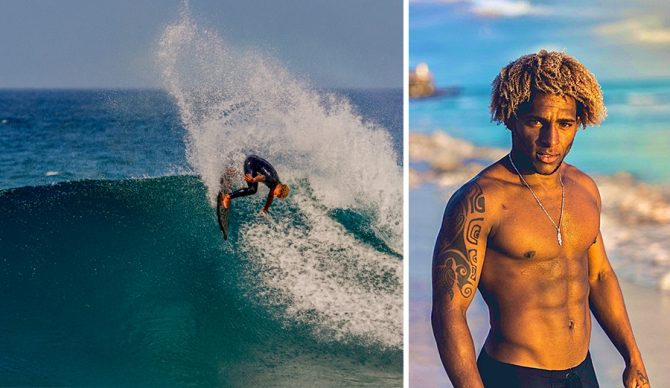 “It’s tough for me to be who I am, and where I am,” Robertney Barros told me recently. “Nothing’s been easy, and there have always been big stones in my way.”

Barros is from Cape Verde (officially the Republic of Cabo Verde), an archipelago of 10 volcanic islands in the central Atlantic Ocean, located 400 miles off the coast of Northwest Africa. For a surfer, it’s a location that has everything. In the Northern Hemisphere winter, north swells wrap into the reefs, points, and beachbreaks, especially on the island of Sal, where Barros grew up.

The waves of Ponta Preta, a long right-hand point that holds serious size, and Spoutnik, a spinning left, are just two of the world-class breaks a five- to-15 minute drive from the center of the stunning Bay of Santa Maria.

In the summer, south swells light up remote and empty breaks on the nearby islands. Barros, who has surfed Skeleton Bay, claims there is a right-hander in the islands that is heavier and longer than the Namibian left. Mick Fanning is just one surfer who keeps in touch with Barros, as he eyes off a lightning strike to a surf region yet to be fully explored.

“The water is warm, green, and clean, the sun shines all year round, and there are little crowds,” beams Barros. “Everyone is welcome, obviously people need to show respect, but we want people to share our waves.” 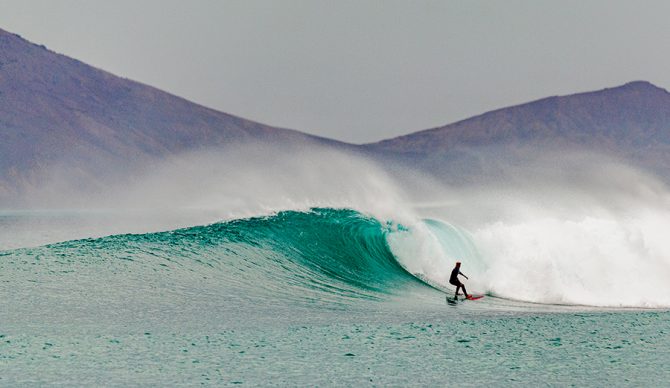 This is home for Robertney. And it’s beautiful. Photos: ishootu_surfphoto

Barros grew up on the island with very little in terms of material comforts, under the care of his single mother. In his teens, he had plans to be a professional soccer player until a series of serious injuries shut down his plans. He then turned to the ocean. Barros first tried skim boarding, then bodyboarding, before falling in love with both surfing and kitesurfing.

He was good at both; his natural athleticism and powerful build lend itself to an explosive style. His kite-surfing background has also led to a crazy air game. Yet if being a surfer in Cape Verde is one of the easiest pastimes on the planet, being a professional surfer is another issue entirely.

“We have so much talent here on the island, but without funding, coaching, and equipment, it’s really hard to compete,” says the 28-year-old. “We are doing it all on our own which is difficult.”

With no local manufacturing, all the surf equipment has to be imported and is expensive. Barros always brings extra boards and wetsuits back from his trips overseas and asks visiting surfers to do the same. Travel too is difficult; Barros needs to apply for an expensive visa each year just to leave and airfares aren’t cheap from an isolated chunk of volcanic rock in the middle of the Atlantic Ocean.

Yet, despite all the barriers to entry, Barros has fought hard to gain sponsors and compete at the highest level possible. He recently was signed by Wildsuits ( the French brand that signed Matt Wilkinson as well) and supplements his sponsor income doing ding repairs and surf and kite instructing so he can compete. He is a two-time national champion, and the first from his country to surf in a WSL event. His immediate goal is to represent Cape Verde at the ISA Games. His ultimate dream is to surf in the Olympics.

However, even that pipe dream has recently been turned off at the tap. With no government funding, the local federation has been unable to pay the fees to register with the ISA. That means Barros hasn’t been able to surf in the pathway events that could lead to Olympic qualification. And if all that wasn’t enough, the pandemic decimated Cape Verde’s economy, 90 percent of which is based on international tourism.

Despite the stones in his path though, Barros isn’t crying poor, or in any way feeling sorry for himself. It was a visit by Italo Ferreira, back in 2018 that still inspires him.

“I see Italo as my idol. He visited me, and he slept and ate in my house,” said Barros. The pair share much in common, including their physical appearance, aggressive goofy-foot approach, even a tattoo.

“Robertney grew up without much, just the ocean, and the waves and people who loved him, just like me. Just with much, much better waves,” Ferreira told me. “It’s a simple life and a good one, but he’s had to fight for everything he has. For me that trip to Cape Verde was extra special because of that.”

That’s not too much to ask, is it?

To get in touch with Robertney or to find out more about him, check out his Instagram profile here.