Love It Or Hate It, the Cut’s Making the Tour Interesting; Who’s Safe?

If Bells seemed especially entertaining last week I’ll raise my hand and be the one to remind everyone why: because there’s actually something at stake right now. Love it or hate it, the WSL’s brand new mid-tour cut is making things interesting — relegating every CT athlete ranked lower than 22 for the men and lower than 10 in the women’s rankings to the Challenger Series.

Admittedly, the Tour has lacked juice in April in past years. There’s no urgency. We could talk for days about CT athletes deserving a full year on Tour, etc., etc., but from a fan perspective, high stakes are what make any sport worth watching. And professional surfing has traditionally been lucky when it runs into an event or a title race where those ingredients actually exist. So the WSL just manufactured them in the form of the Challenger Series and the mid-season cut line. And now we all care about more heats and who’s making them. Voila. And trust me, the athletes want this too. Even if some of them don’t want to believe it. Because a more engaged fan base ultimately puts more money in their pockets.

So, who is safe and who is on the chopping block ahead of Margs? Who is potentially falling victim to this new format that’s left us fans with a way, way more interesting April and May – one that would otherwise just be another ho-hum April and May watching the Dream Tour? 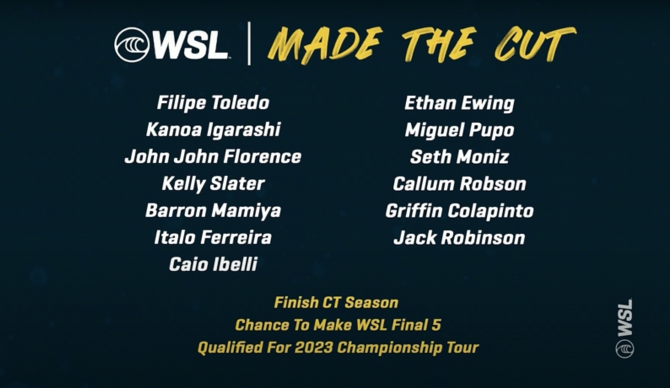 The post-Bells broadcast broke down lists of who has already made the cut and who’s surfing for their Tour status lives. Nine men’s spots are up for grabs in West Oz, while 13 athletes are safe. Notably, Jack Robinson and Calum Robson’s performances at Bells leapfrogged each of them out of danger and into a full year on the CT itinerary. Meanwhile, Kelly Slater and Baron Mamiya are both grateful for their wins at Pipe and Sunset respectively. Neither has made it past the Round of 16 in the events they didn’t win.

As it stands right now, Conner Coffin and Owen Wright are the highest-ranked odd men out. Both reportedly put their signatures on a petition to the WSL requesting the mid-season cut be abandoned, and both have made it no secret they don’t love the cut.

“Just throwing down the fact that this mid year cut off thing is absolutely bullshit,” Parker Coffin, Conner’s brother, wrote last week. “If you work your entire life for the opportunity to compete on tour, you deserve a full year. Trust me, I have done the WQS and know how hard it is. This back to the last year…if the mid-year cut existed guys like Jack wouldn’t be on tour and wouldn’t have won Mexico.”

On the women’s side, Tyler Wright, Carissa Moore, Brisa Hennessey, and Lakey Peterson are the only athletes guaranteed their roster spots past Margaret River. Johanne Defay is sitting in the Top-5 right now, which would put her in the Finals Day lineup at Trestles in September, and even she will be surfing to stay on Tour next week. So like I said, there’s a lot at stake in April. It’s not something we’re used to seeing from the World Tour. 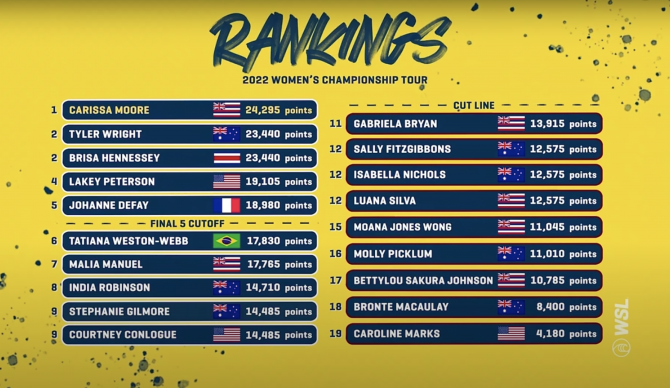