Here’s a fact that’s easy to overlook when it comes to pushing your limits in heavy surf: you have to get back to land at some point and the safest route isn’t always what you might expect.

Sunset and Waimea Bay are good examples of places where people can lose their leash and then let their emotions get the best of them because they didn’t have a game plan. They’re faced with swimming in from a lineup that has a big channel and a rip pushing out. What happens in places like this? Well, you want to swim into the impact zone as fast as you can. You want to harness that energy of the waves to push you in. All that water is dumping out into a channel, going out to sea, and you will never make it to shore by swimming directly against that current.

You will not win in this scenario. And you will have to realize that way out at sea, before coming back into the lineup, working your way into the impact zone, and starting this process again in a very exhausted state.

All this is counter-intuitive to a lot of people. We intuitively think we should go for the channel and stay away from the impact zone’s churning whitewater. But see, in the ocean, you need to think three or four steps ahead. I would say eight out of 10  rescues I’ve seen on the North Shore are to help people that were unwilling to go back into that impact zone so they could get back to shore safely. They’re stuck in that rip and going out to sea. 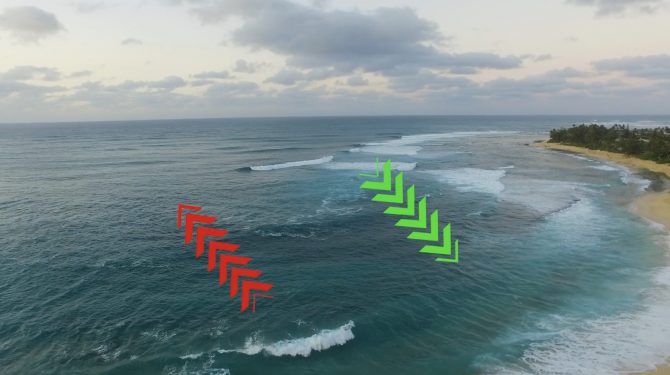 Use the wave’s energy to push you back to safety. Photo: Inspire Courses.

I would guarantee this scenario comes from a person failing to make a game plan before getting in the water. And now they’re stuck dealing with what’s in front of them, reacting in a fight or flight way. I’ve seen people get into that impact zone wanting to swim under the waves, meanwhile, a lifeguard is instructing them, “Let the waves push you in.” But they can’t bring themselves to do that. They’re too scared. So they’re doing something that’s actually damaging – all out of fear.

This may be an extreme example, but it’s never pleasant for me to find myself in the impact zone at Jaws, copping a 50-footer on the head. I may be physically conditioned but I know in these moments I still have to get my head right. Unless that wave is breaking right on me, I’m barely ducking my head underwater. I want to be close to the surface because I want the energy of that wave to push me in. The more energy of those waves being used to push me in, the further away I’m getting from the impact zone efficiently.

Meanwhile, if my priority is getting to safety, I’m only burning a lot of energy and oxygen by swimming deep under the whitewater. It is an instinctive reaction that actually hinders me from getting where I want to go: back on land.

With all that said, it can definitely be safer outside of where the waves are breaking. Here, you can take a moment to collect yourself and prepare yourself for what needs to be done. But unless you have a boat or a Jet Ski nearby, you still have to make it to shore. You still have to deal with the inevitable challenge ahead.

As for specific safety tips when getting in from an impact zone, well, it really depends on the hazards and the setup. You may have rocks against a cliff or a jetty in front of you, for example. You obviously don’t want to go near those headlands. And based on all factors like where the current is moving in relation to that headland, where the impact zone is, and what other hazards may be present, you should have devised a few different game plans in case you lose your board. You want to create situational awareness. And this will keep you from panicking.

If you ever find yourself in a rip that’s sucking out to sea, whether you’re swimming at that point or you’re still on your surfboard and just want to get to shore, do not keep paddling directly into that current. This is a rule that applies across the board. Don’t paddle straight in, which puts you directly in the middle of that rip, because you’ll just be on a treadmill. You’re wasting valuable energy. Getting out of that rip, however, will conserve energy and enable you to get to shore more efficiently.

Pro Tips
–As painful as it might be, a breaking wave does the work to get you back to shore.
–Do not paddle straight to shore while in a rip. You will exhaust yourself.
–Within eight feet of a hollow landing lip, there is often a small window to successfully duck dive. The lip hasn’t fully penetrated the water column here.
–Always protect your head. Sacrifice your elbows and hands to protect your skull.