Matt Meola Wants to Teach You How to Land (Huge) Airs

The first time I encountered Matt Meola was through a French company called Oxbow in 2011. Excited to announce him as a new addition to its team, the brand produced an ad featuring him wearing a gas mask – frenetically cut with next-level aerials that he landed like a greased cat. Rubber knees. Suspended gravity. Aggressive. His aerial energy was arresting. It was raw and reckless. Just a short time later, Matt won Taylor Steele’s Innersection contest, and he’s been a fixture of surf innovation ever since.

Notably, the man landed the first ever Spindle Flip in 2015 – a maneuver that stopped the surf community in its tracks. And we’ve continued to look to Matt for innovation above the lip.

I’ve always wondered what it’d be like to launch airs like Matt. Every so often, if a rampy, end section presents itself, I’ll throw caution to the wind and give it a crack. That usually ends poorly. Embarrassingly. But every so often (I THINK) there’s a tiny gap of air between the bottom of my fins and the surface of the ocean, and I’ll feel like a kid. God forbid I review that footage. I’m sure it’s not flattering. But it’s fun. And that’s the point. And that’s the spirit that inspired the newest release from Inspire Courses: Matt Meola’s Guide to Aerial Surfing.

Now, we can all learn to launch airs from a certified pilot.

That doesn’t mean it’ll work. But it sure as hell won’t hurt. Picking the mind of savants is a privilege indeed, so when Matt embraced the challenge of translating his aerial knowledge for us common surfers, we were thrilled.

“I’ve dedicated my entire life and career to the progression of surfing, mostly in the air,” says Meola. “I want to help new surfers learn to do airs, and I’d also like to help surfers who are starting to do airs, do better airs or get more tweaked out. I’m excited to teach you a few things that I’ve learned. Hopefully, it helps you become a better surfer and accomplish your dreams of doing airs.”

Matt shares his aerial philosophy, tips before take off, in-flight recommendations, and landing suggestions that can help you avoid injury as he walks you through his approach to five separate airs, step-by-step. In the course, he reviews:

His course includes detailed video breakdowns on each type of air so you can take notes and apply Matt’s suggestions to your next session.

Whether you’re an intermediate surfer hoping to stomp your first air or your aerial surfing has reached a plateau and you need a nudge from an expert, Matt Meola designed his course to to help you take your air game to the next level.

“If you stay committed completely and try to pull everything, you’ll be surprised at how much you actually land,” he says.

If you’re interested in improving your aerial surfing – whether that means landing your first straight air or your first backflip, check out Matt Meola’s course. Then do as he does, and go land an air. 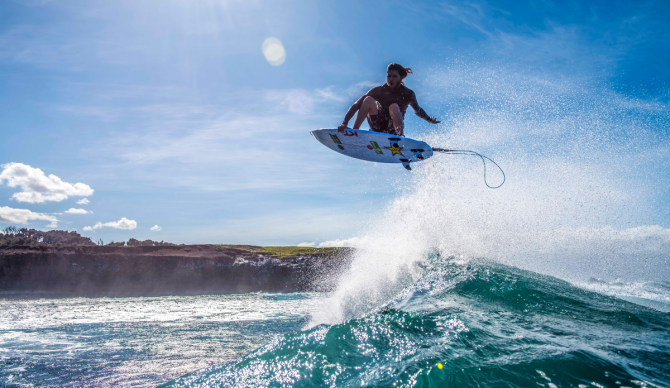 “You’ll be surprised what you can land if you commit,” says Matt Meola. Photo: @1more808 / Dayanidhi Das