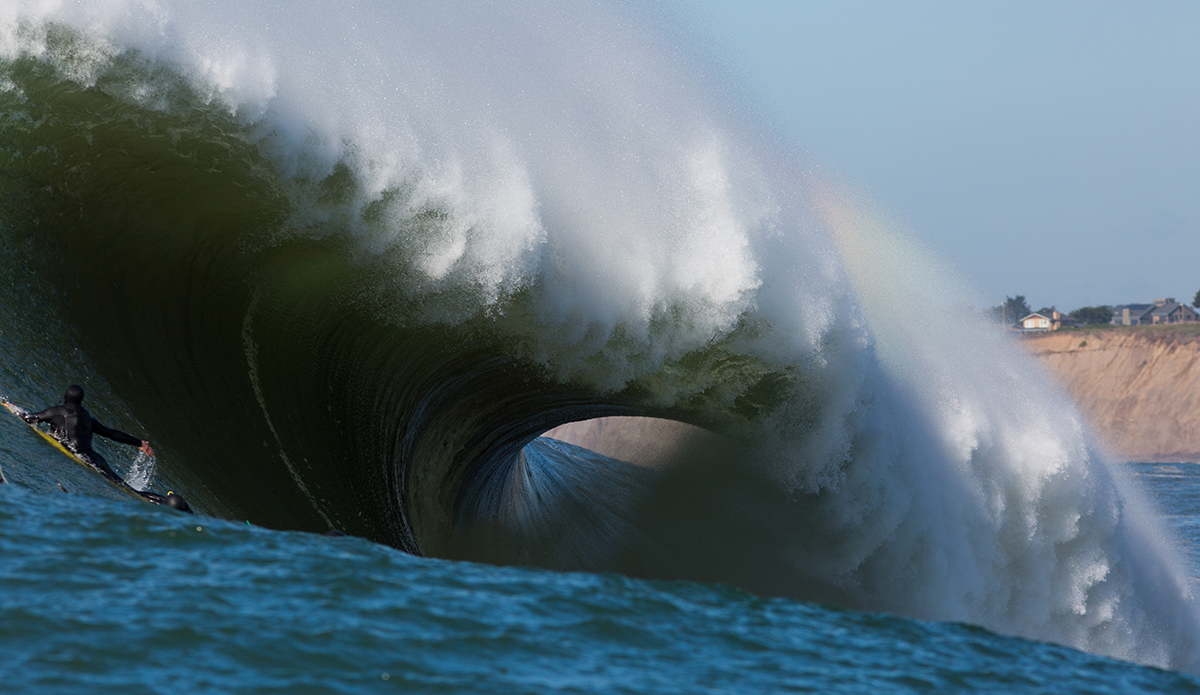 According to reports, the Mavericks Challenge will not run on Monday. The WSL hasn’t made an official announcement. Photo: Carlos Vargas

Remember that time when the big wave event at Jaws got called off because the waves were too big? Well, according to a report from ABC7 News, Maverick’s isn’t going to run on Monday for the same reason.

“Half Moon Bay Sportfishing, who runs boat tours for the big wave surf contest, told ABC7 News in an e-mail Thursday night that organizers informed them that the contest will not happen Monday,” wrote ABC‘s Brandon Behle.

Greg Long, a man who knows big waves better than nearly anyone and a man who has spent a lifetime navigating the vagaries of the surf forecast, explained via text message. “Going to be a lot of bump on it in the a.m. left over from three days of south wind prior,” he wrote. “It’s not too big, just sketchy conditions to try and surf at that size.”

Aw shucks, right? But fret not. Much like the Jaws event, organizers are apparently going to wait until the waves get a little less death-defying—which, of course, is bound to spark some rage from both the armchair quarterbacks and a few who actually surf waves that could kill them.

“Like watching a violent NFL match up,” wrote Joe Carberry after the Jaws event was put on hold, “there was a tinge of guilt viewing these gladiators from the computer screen as they tossed themselves over the edge of sanity, trying to make it to the bottom of 40-foot giants that rumbled towards Maui’s north shore. There was a possibility to make each wave. But at what cost?”

The cost, according to Big Wave Tour Commissioner Mike Parsons was too high. A fair point, if one is looking to run a business. It’s a fine line to walk between the most exciting event ever and the most tragic one, and erring on the side of caution is understandable.

“It felt like it was getting too dangerous,” Mike Parsons said about calling off the Jaws Challenge. “It’s a tough call to make at the end of the day, but safety has to remain the number one thing.”

Still, though, calling off a big wave contest because the waves are too big just… stinks. There are days when paddling becomes impossible, but it’s not exactly a deep line in the sand. Some might be able to paddle while others simply cannot—and isn’t that part of what makes a contest so good? “Someone will win ride of the year if they do call this thing off,” said Billy Kemper just moments before the Jaws contest was put on hold. “It is gnarly, it is dangerous, but this is what we live and train for.”

Surfline’s forecast for the Mav’s contest does indeed look gigantic: Pillar Point could get waves as big as 65 feet. Monday’s is “the kind of swell we only see around three times a decade,” forecasters wrote on Wednesday. “A swell this massive will shut down most spots along the West Coast north of Point Conception.”

While it hasn’t been officially confirmed by WSL officials, it looks as though Thursday might be the best day to run the event.