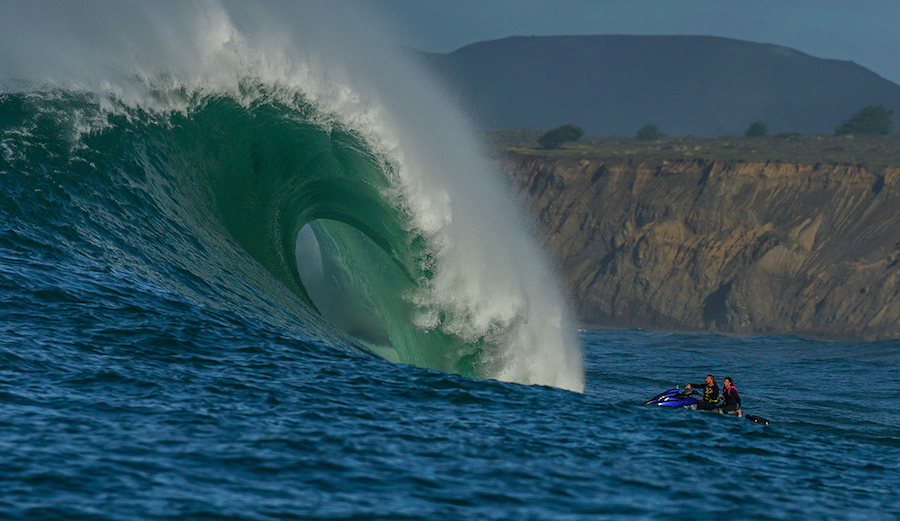 Efforts to bring a World Surf League Big Wave Tour stop to Maverick’s in recent years have been difficult, to say the least. And those efforts appear to be over for now. According to a source in regular contact with the WSL, CEO Sophie Goldschmidt confirmed in a Wednesday conference call that the League would cut its losses for the 2019-2020 season and axe California’s premier big wave spot from the BWT schedule entirely.

The writing for this has been on the proverbial wall for years now.

Recall that in 2017, the League confirmed it had purchased the Maverick’s contest permit from its previous owners, Cartel Management, for over half-a-million dollars after the company became mired in controversy and filed for bankruptcy.

Since that time, the WSL Mavericks Challenge hasn’t run once.

More recently, though, San Mateo Harbor Commissioner and Committee for Equity in Women’s surfing co-founder Sabrina Brennan had an inkling that something was amiss. Efforts to run a Big Wave Risk Assessment Group (BWRAG) safety summit to coincide with the opening ceremony for the contest were met with a general lack of enthusiasm from the WSL and comments to the effect that the League would reveal its plans for the 2019-2020 Big Wave Tour at a later date. Brennan explained the Harbor District has already invested heavily to support a Maverick’s BWRAG summit and was eager to work with the world’s best big wave surfers in California to commemorate the beginning of the big wave season. Furthermore, Brennan’s contacts at the Coastal Commission revealed the WSL had bypassed the application deadline that would put them in position to hold the waiting period beginning November 1 as in past years.

When we reached out to the Commission early Thursday, a spokesperson said that to do that the League “should have sent the application a week or so ago.”

An NBC Bay Area affiliate ran with the story on Wednesday prompting a phone call between Brennan and WSL leadership during which the League made known its plans.

“OFF!! No Mavericks,” Brennan wrote to The Inertia in a text message. Officials reportedly blamed the inability to land a presenting sponsor – because what corporation would throw money at an event that hasn’t successfully gotten off the ground over the last two years?

Last year, we reported the fight for equal pay at Maverick’s was instrumental in the World Surf League’s decision to institute equal pay across the board. A final Big Wave Tour season event there for both men and women where the respective champs could hoist giant checks with the same numbers above their heads was highly anticipated, but alas, it never occurred.

Now, after two successive winters of holding onto an expensive permit with nothing to show for it, the WSL will not host an event in Half Moon Bay during the 2019-2020 season, though no word yet on whether that goes for next year’s BWT, too, the final year the WSL will have exclusive rights per the Harbor District permit purchased from Cartel.

It’s conceivable the League could even seek to sell the permit off to the highest bidder to at least make some money back on what now seems an extremely poor investment. The WSL did not immediately return The Inertia‘s request for comment for this story.

In an interview with NBC, CEWS founding member and perennial Maverick’s standout Bianca Valenti held out hope that Maverick’s wouldn’t be cut.

“Each time we think we’re going to be getting the opportunity, something seems to happen,” she said.

This time, unfortunately, is no different.