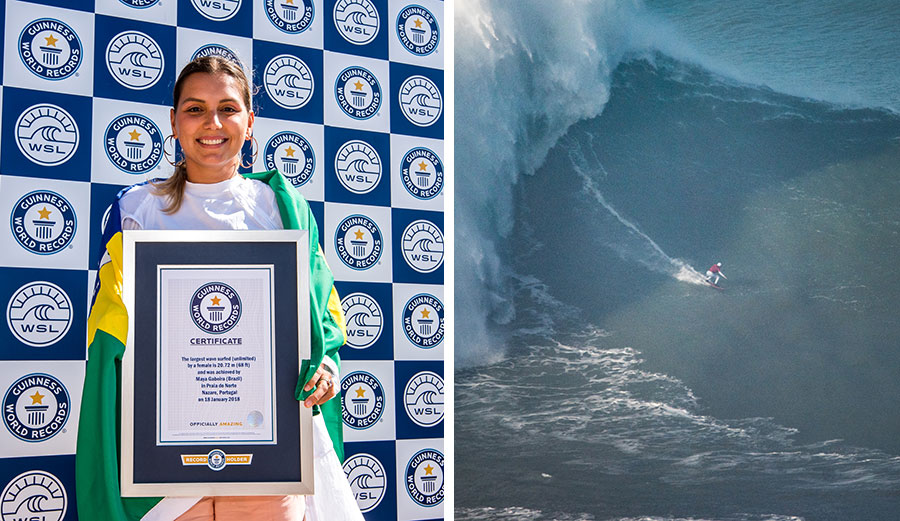 Maya Gabeira finally won a Guinness World Record for the biggest wave ever surfed by a woman. Photos: WSL/Bruno Aleixo

On October 28, 2013, Maya Gabeira nearly died at Nazaré. Now, five years later, she’s been awarded a Guinness World Record for the biggest wave ever surfed by a woman—and she surfed that wave at the same place that almost killed her. The record-breaking wave, which she rode in January of 2018, was officially measured at 20.72 meters, or 68 feet.

But it was a very long road to the top of the Guinness podium, and it’s worth looking back at her journey to get there. That storm in 2013 that created the swell that almost killed Gabeira was called St. Jude’s Storm. In Denmark, some 2,000 miles from the Nazaré Canyon, winds up to 121 miles-per-hour were recorded. All told, over a dozen people died in Eastern Europe due to various wind-related causes. The waves that storm produced were of ungodly size. When they hit Portugal’s infamous deep-water canyon, their power intensified into sets that were upwards of 100 feet.

“It was huge. Oh my God, it was huge,” Gabeira told me in a small voice during an interview two months after her accident. “I got out there, and I was super anxious and scared.” As the sun peeked over the horizon, Gabeira and her regular tow partner, Carlos Burle, motored out through the moving mountains of water on a Jetski. They got in position and waited for the right wave. After looking down the face of two giants in excess of 60-feet, Maya started to back down. “After the second one, Carlos said, ‘I think that was a good one,’ but I wanted a smaller one,” Maya explained. “Carlos said to me, very honestly, ‘You’re either going to get a bomb today or I’m not going to drive you.’”

Neither Maya nor Carlos will ever forget what happened in the minutes after that statement. “He didn’t want to put me into this risky situation for anything other than a bomb,” said Gabeira. “It was really just one of those days where you wanted it or you didn’t.” The following is an excerpt from a piece published in 2013 called Maya Gabeira, Carlos Burle, and the Tow Partner Relationship: On the Edge of Death:

“As the next set darkened the horizon, and the pair turned and pulled into position. Burle, looking over his shoulder, gauged the wave that he was pulling Gabeira into. Maya held onto the rope, looking over the edge of a yawning, watery chasm, her fingers wrapped tightly around the handle of the rope. “Carlos started screaming,” Maya said. “‘GO, GO, GO!’ That’s when I realized the wave was mine.”

She let go of the rope, and things started to go wrong very quickly. The wave’s size, by all estimates, far exceeded any other wave a woman had ever ridden.

As she descended the wave face, the wind whipped her wave into something almost unrideable. “My wave was a nightmare,” she remembered. “I went over the first bump, then the second, and the wave kept building behind me.” As she charged down the face, things got exponentially worse. “Every air drop I did got bigger and bigger, and on the third drop, I twisted my leg on the foot straps. I didn’t feel that I’d broken my leg until way later.”

Halfway down a wave estimated to be 60 feet tall, Maya’s leg shattered. When she fell, the weight of the ocean landed on her, driving her deep underwater in a crushing mountain of whitewater.

Burle looked on in horror from the Jetski as his partner disappeared. The force of the wave had ripped off her life jacket.“If I panicked, I wasn’t going to make it,” said Maya. “I was pretty conscious that I had to make a real effort to get out of there. When I came back up, the first thing I saw was Carlos. I realized I was in a bad position, but I knew he had seen me. I knew that at some point I could let go because I trusted him. I knew that he would do anything to rescue me.”

Burle managed to position the Jetski close enough to get the towrope within her reach, but not the sled on the back. In what has become a much-discussed rescue, Gabeira grabbed a tentative hold and hung on as Burle attempted to drag her away from the next wave. The wave caught up to them, engulfing Maya in ten feet of foam and knocking the rope free of her hands. “She grabbed the rope, and I pulled her a bit – but not too fast,” remembered Burle. “That was her last energy, though. She couldn’t hold on.” Gabeira was left, once again, to fend for herself in an almost impossible situation. “There was a time where I was completely on auto-pilot, but I knew that something bigger than me and greater than me was going to decide whether I was going to make it or not,” Maya said. “Sometimes, you know, with all the training in the world, you’re not going to come up. I put my life in the hands of something bigger at that point. I had to get lucky.”

When the wave had passed, Gabeira floated to the surface, face down and unconscious.

“My big mistake was thinking that she was doing okay,” said Burle. “I realized she was in bad shape when I got up to her and she didn’t even move.” Burle didn’t think twice. Leaping off the Jetski, he wrapped his arm around her and began swimming towards shore. The shore break at Nazaré is almost impassible. The full brunt of the massive waves dumps onto a steep incline, throwing tons of water onto dry sand. “I had to deal with the surge that would suck us back into the water and that enormous shore pound,” remembered Burle. “But every single moment, I was thinking, ‘She’s not breathing. I have to get her out of the water.’”

“Everything that happened that day was literally a reflection of all the years we’ve spent together,” said Gabeira, thinking back on their time. “All the big waves, all of our training; going through so much. That day was a summary of our work as a team.”

Maya, of course, made a full recovery. She spent months in rehab, slowly gaining back her strength and her courage. In December of 2015, she made her return to surf the place that very nearly ended her life.

That return was no easy task, but it was something she had to do. I had to dig really deep,” she said. “And I had to do the hardest thing for me, which was to come back and surf Nazaré.” And she came back with a vengeance. She spent the next few years making sure that at every massive swell, she was there putting in time and figuring out one of the most difficult lineups to figure out. She fended off numerous accusations that she didn’t have the know-how needed to be out there, most notably by Laird Hamilton, who very publicly called out Maya’s skill. It was quickly labeled as sexism, which Hamilton disagreed with. “I think whatever I said, I’d say again,” he remembered about the debacle in May of 2014. “I think people misinterpreted what I said. People obviously don’t know me if they think I was talking about women. I have a lot of respect for women. My wife is a professional athlete, and if Maya had the skill and the experience to be out there in that situation and not be a liability to herself or to someone else, then I would have nothing to say.”

Then, on January 18, 2018, Maya Gabeira surfed the biggest wave she had ever ridden. Bigger than the one that nearly killed her. Bigger than any other wave any other woman has ever surfed. She knew it. There was video evidence.

For some reason, however, no one seemed to care. Maya wanted the record, though, and nothing was going to stand in her way. “Since I was a girl, I have dreamed of the day I would see a woman recognized in the Guinness Book for big wave surfing,” she explained. “…in January of this year, after five years of recovery and training, I successfully rode the biggest wave of my life. Miguel Moreira, an expert at the University in Lisbon, measured the wave and tells me that it is indeed a world record.”

Gabeira claimed that the Guinness Book of World Records required that the World Surf League certify her wave before they would consider it. She flew to Los Angeles to the WSL offices, where, according to her, “they promised to support a world record for women.” Then, months of silence. Gabeira felt ignored, and she was livid. “Many months later, there appears to be no progress and my emails have gone unanswered,” she wrote. “I’m not sure what’s going on, (but there are definitely some people who don’t like the idea of women surfing the biggest waves.) Anyways, perhaps I haven’t been able to scream loud enough?” She started a petition that was signed by nearly 20,000 people.

The WSL defended themselves: “The WSL has been discussing the review process with Guinness regarding Maya’s wave for the past couple of months,” a World Surf League representative who asked to remain anonymous told The Inertia. The official statement said basically the same thing and promised an announcement regarding women’s big wave surfing. “We have a huge amount of respect for all our big wave surfers,” it said. “We have been in active discussions with Guinness for some time on the topic of reviewing Maya’s incredible ride from Nazare earlier this year for submission, and look forward to continuing to celebrate men’s and women’s big wave surfing with an announcement soon.”

Soon after, the Big Wave Awards also added two new categories: Women’s XXL Biggest Wave Award (where Jetskis may be used) and the Women’s Biggest Paddle Award. And perhaps most importantly, helped Gabeira get that all-important Guinness World Record for women. “This is a dream come true,” she said in her acceptance speech.”It took some time, you know? I came in 2013, I almost drowned, I had spine surgeries—like three in a row—I was injured for a while and I was pretty scared in my head. I had a lot of trauma to overcome… I had, of course [a World Record] as a dream, but I didn’t know if it was going to be possible because I had so many injuries and I was so scared. It happened not just because of me, but because I had honestly the best support someone could ask for.”