Ronald de Leeuw
Wave riding Dutch guy who loves to take the piss out of others, but mostly himself.
Community 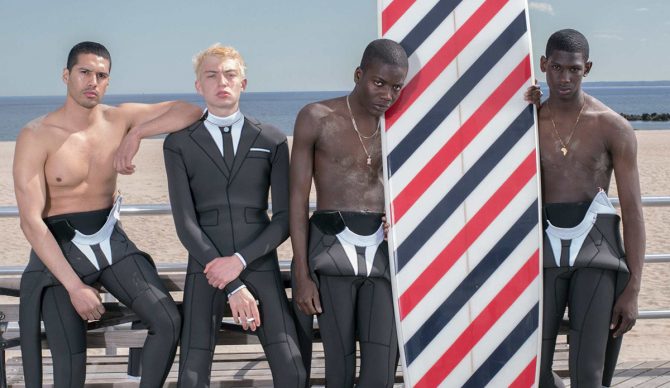 For the past week, we’ve all been tagging each other en masse, passing around photos of spaghetti looking boys in neoprene suits. You know which ones I’m talking about. They blew up the internet. Your aunts felt it necessary to share them with you on Facebook (that’s what you get for bragging about your hobby when you see them at Thanksgiving and Christmas), while many actual surfers felt this was a good opportunity to manufacture some outrage.

I responded immediately as well, going so far as to send a sarcastic and cynical email to the fashion icon behind it all, Thom Browne:

Aloha Mr. Browne,
I just started a full-time office job, which is totally rad but also a bummer for me because I surf. Thank God I work for a surf brand, but it’s still tough to get out there while stuck in an office from 9 to 5. Gnarly times.   Apparently, you’ve done something special because your wetSUIT is all over social media. It’s totally radical, dude!  I need that wetsuit, man! I want to feel the yeast form between my asscheeks while wearing it at the office. My coworkers would be so jealous! #yeastmode

When I finally found the wetsuits for sale on your website I also noticed you sell boards. Conveniently enough, I happen to need a new stick as well. I just have a couple of questions about this new Thom Browne designer surf line, so please help me out.

-How thick is the suit? Hopefully, it’s a 5/3 for the chilly winters here in Holland!

-Does it have a key pocket?

- Does it have an identity crisis? On your site, it says it’s 9 feet one moment then 10 feet the next.

– How thick and how wide is it?

– How many ounces did your glasser pour on the deck and bottom? (I want to make sure I don’t leave too many footprints on the deck while gracefully stomping my way toward the nose)

Surfing is expensive in your world, man! I noticed you ask $3,900 for the suit and $4,500 for the board. Totally worth it if you’re asking me, but it’s still out of my price range. However, I’m a surf influencer with just over 540 followers on Instagram (@surfoloog). Therefore, the real question here is why am I not one of your team riders, brah?

Seriously, though. Wanna sponsor me?

In all the commotion, I fell down the rabbit hole that is a Facebook comments section. I learned about the guy stitching these suits together by hand, the neoprene magician Shane Jones. If you don’t already know, this gig pocketed enough for Jones to move out of his van and into a new home. That part of this whole story is awesome, and after exhausting all my online shouting, I started to think about the “deeper” meaning of all this. Is this whole designer surf movement art? Is it a social statement? Or maybe it really is just plain hype and bullshit. Nonetheless, the prices are at least bizarre.

So what if Thom Browne, a fashion icon, actually understands our surf scene and decided to make an online art exhibition out of it? Out of us? I mean, how the hell do you get people to gather and debate in a museum or on a runway? Well, you take it all online and stir things up. You make it controversial.

What if this is all just a depiction of modern day society? What if it’s a statement about trying to balance real world puruits like a steady income with a sport that kind of demands you remain flexible at all times? Maybe that’s also why the models look like spaghetti boys – being flexible and a tad creepy.  What if it’s turning a mirror on us as surfers about all the conformity that we also face? Many of us walk down the beach in similar black wetsuits with the same Hypto Krypto underneath their arms.  Or maybe it’s about surfing losing its soul? We will never know the answers to these questions because that’s what art does. It asks you to think in different ways and develop a new outlook on all sorts of things. All in all, it’s great marketing and an even better way to start engagement about sensitive topics.

Or maybe it’s still just expensive shit. It’s entirely up to you to decide.

You might think it takes balls to draft up a letter and sending it to a designer, but it takes bigger balls to admit you jumped the bandwagon too soon and apologize for your amazingly witty cynical email.   So to Shane and Thom, I’m sorry guys!  Will you still be my sponsor though?