There are a few people in surfing’s history that have reached legend status. Duke, for one. George Greenough, Nat Young, Miki Dora, George Freeth, Leroy Grannis, Doc Paskowitz, Bob Simmons, etc. The list could go on for a long time, and yes, I’m missing a lot of them.

Of course, there is a difference between surfers and plain old wave riders. There is a lot to be said for someone that can ride a wave on anything from his bare skin to a mat to a shortboard to a longboard. To really become a masterful wave rider, one needs to instinctively know exactly what to do in certain situations. To read what a wave will do in a few seconds time, just from a slight feathered lip or a little warble in the face down the line. I’m not sure that what it takes can ever be really learned – it may be something that some people just know. I’m not sure what it takes because I’m not there, nor will I probably ever will be. But man, can I ever appreciate it.

Merv Larson was one of those people. As the father of the pretty much defunct American waveski, or the surf ski, Larson was doing shit back in the 60’s on a ski that people are just figuring out now on a surfboard. The clip above is on the increasingly amazing Encyclopedia of Surfing, and was filmed by John Severson back in 1969 at Rincon. It shows just how far ahead of the game Larson and his odd little contraption were.

Matt Warshaw, the owner of the surf- trivia soaked brain that developed the EOS, had this to say about Merv:

“The most progressive high-performance surfers at this point—Lynch, Young, Aurness, Spencer, Abellira—were still very much in the process of knocking off rough edges. Choppy turns were the rule. Body dynamics were all over the place. Dudes were bending at the waist to ride the tube. Counter-twisting their cutbacks. Hell, Lynch was still cross-stepping to the nose. Meanwhile, Larson’s first ride here, everything, every turn and adjustment, from the opening fade, to the cheeky side-slip, to the big money top-turn-bottom-turn combination, is calibrated, linked and balanced.”

According to an article in Surfer Magazine back in the ’70s, Merv was a lifeguard with a german shepherd named Dingo.  Surfer called him more visually exciting than Greenough on his kneeboard, and what any of the top surfers were doing on a surfboard at the time. As his surf ski had no fin, everything came from masterful rail work and paddle use. While surf skis have largely fallen out of fashion, Larson did make one prediction: “The thing that’s eventually going to make if for skis,” he told Surfer, “will be the man-made wave.” And with the giant leaps forward in wave pool technology, time will tell if Merv Larson’s prophecy turns out to be true. If his ability to predict what a wave would do is any indicator, I’d say there’s a good chance. 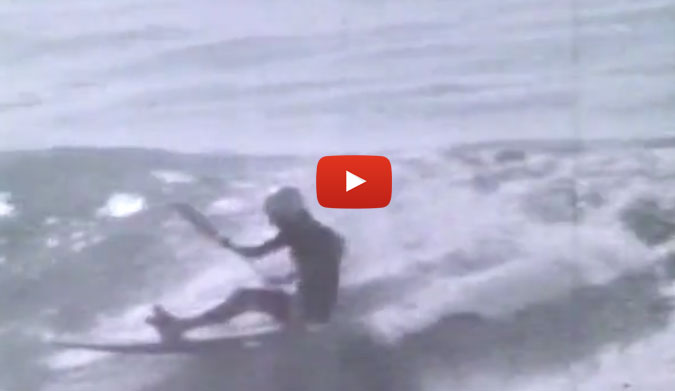