Mick Fanning Was Definitely Attacked by a Shark 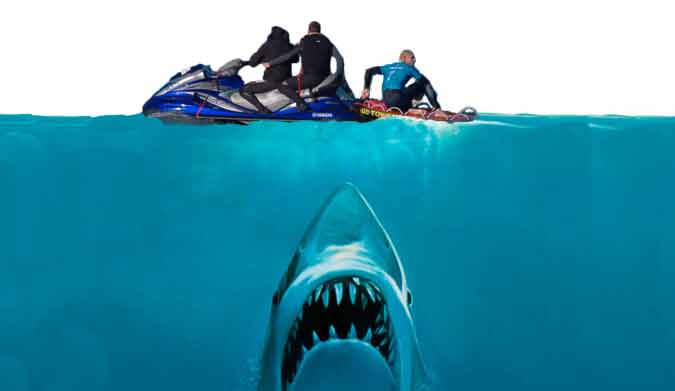 “For all I know, it came rushing up from the briny depths with murder in its soulless, black eyes. It wanted to eat Mick Fanning in one massive bite, then spray his blood all over Julian Wilson and laugh maniacally in the face of the crowd. More likely, I think, is that it just wanted to see what the hell was floating around up there, then got caught up in Mick’s leash. “

A few days ago, we published a piece by David Flores called Mick Fanning Was NOT Attacked by a Shark. As we assumed, it got a lot of people talking. But, as people will do on the internet, the “talking” was mostly just people telling each other how stupid they are. In case you didn’t read it, I’ll try and sum it up quickly for you: Mick Fanning’s shark what-ever-you-want-to-call-it wasn’t an attack, but an encounter. That’s wrong (sorry, David!). Technically, anyway. And I completely understand–and agree with–why Flores wrote it. Sharks get shit on, and we need to stop shitting on them, because it’s dumb.

At this point, we’re really just arguing semantics, but the author’s piece was based on a misunderstanding of the what the technical term for “shark attack” entails. According to John G West, the coordinator for the Australian Shark Attack File, “A ‘shark attack’ is defined in the ASAF as any human–shark interaction where either a shark (not in captivity) makes a determined attempt to attack a person who is alive and in the water or the shark attacks equipment held by the victim or attacks a small-water craft containing the victim.”

And while even that’s a little bit murky (it seems odd to define something and use the thing you’re defining in the definition), it seems clear that by that definition, Mick Fanning was definitely attacked by a shark. That’s not to say that the shark was definitely going to try and eat him, but he was definitely doing something that wasn’t just swimming along minding his own business.

A few days ago, Surfline published a piece that basically says what this one does. They got a hold of a man named George Burgess, who is the Director of the Florida Program for Shark Research and the Curator of the International Shark Attack File. Aside from having a very long title (he’s either using a very large business card or a very small font), Burgess knows more than pretty much anyone about the subject of shark attacks (or whatever you want to call them).

He summed it up in a few quick sentences to Surfline:

Well, it is indeed an attack, as you suggest. By all appearances, it was a situation where a White shark was coming up for an investigation of the situation. The fact that there was no bite suggests that the animal was simply there to check it out, to see what was going on. Whether the shark simply decided “not for me” and avoided its attack, or the shark was simply giving it a quick look to see what it was up there, we will never know.  We can’t get into the heads of these things. But what we can say that from the International Shark Attack File’s view, because contact was in fact made — minimally, with the board — it will go in as an official attack. Even though, in this case, the reality was no actual contact with the human.

Apart from the glaring fact that there was indeed actual contact with the human–unless a dolphin happened to be dancing cheek to cheek with the shark and knocked Mick off his board–if contact with either the board or the human was made, then it’s an attack. Technically. Watch: at six seconds in, Mick takes a wallop to the face.

But I can see where that would be confusing. It was confusing to me, until I looked it up. It’s confusing because apparently, the word “attack” is defined differently for a shark than a human. If I were to attack, say, Toby Aimer, I’d do a lot more than sniff his hair in the elevator, which would weird both of us out. For it to be considered an attack, I’d probably have to do something a little more drastic, like punch him in the throat or hit him in the teeth with a brick. For people, the word “attack” carries with it an intent to do harm… but for sharks, a little hair sniff would be considered an attack, because when they sniff hair, they do it a little more violently than we do.

“You know, White sharks are very curious,” Burgess continued in his interview with Surfline. “They just want to know what’s floating at the water’s surface. These kinds of investigative situations are actually very common with White sharks. Oftentimes they involve an investigative bite, where they’re coming up to get a grab to see what it’s all about — whether these are intentional things, or simply an aborted attempt at a real bite, or they’re just trying to see what it’s all about… It doesn’t really matter.”

None of this is to say I know what the shark was doing. For all I know, it came rushing up from the briny depths with murder in its soulless, black eyes. It wanted to eat Mick Fanning in one massive bite, then spray his blood all over Julian Wilson and laugh maniacally in the face of the crowd. More likely, I think, is that it just wanted to see what the hell was floating around up there, then got caught up in Mick’s leash. Whatever the case may be, it’s an attack, and it would make any normal person shit a spanspek, as they say in South Africa. That’s not to say we should kill all the sharks, because that would be dumb. So brass tacks: some sharks can be really fucking dangerous. They’re massive, and have sharp teeth, and are just perfectly evolved for killing. We should watch out for them. And in certain situations, maybe we should definitely look at how to minimize the risk.

But you know what? We’re way worse than sharks. We’re worse because we not only kill way more of them for shit like soup, but because we have the brains to realize that killing sharks for soup is really, really bad… and we do it anyway. We have the brains to realize how important sharks are, and there are still people that would be perfectly ok with killing them all. THAT’S dumb. But still… Mick Fanning was definitely attacked by a shark.

Read the full interview with George Burgess on Surfline HERE.