My (First) U.S. Open of Surfing 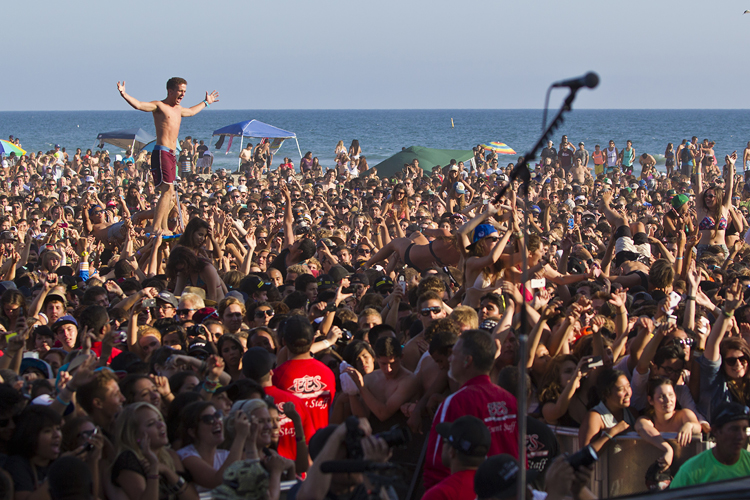 Admittedly, this was my first time attending the U.S. Open of Surfing, and I stayed on the couch of a friend-of-a-friend. Sometimes these “new people, new place” situations can be overbearing, but for some reason I felt like a kid in a candy store.

I fully attribute my positive attitude to the good vibes at the crowded contest site: the world’s best surfing professionals, skateboarding’s best amateurs, California’s most beautiful women (with the words “Free Hugs” written on about 85% of their bodies), and the lake-like conditions of the Pacific. Considering the number of events that happened, it’s dizzying:

-Three concerts, including the likes of Best Coast, Grouplove and TV on the Radio

And all of this jam-packed into a week long beach party. This year, Huntington played host to record-breaking crowds (estimating more than 750,000) as scantily clad teens shuffled to and fro across the beach.

Each night as the sun set on the town, the masses descend upon the bars of Huntington and nearby Newport Beach, thoroughly stimulating the local economy. People are getting along, talking, drinking, singing and generally having an awesome time. It makes you wonder; if we all surfed and drank this much, would the world be a better place?

The surf may not have been all-time (understatement), but that definitely didn’t stop the sport’s top athletes from showcasing an awesome display of progressive surfing. On Saturday, Connor Coffin and Nikki Van Dijk claimed the Junior Men’s and Junior Women’s titles, respectively. Coffin put on a spectacular display of new-era power surfing in a tough final including local grom-star Kanoa Igarashi.

The following morning, I rubbed my weary eyes and made my way to the contest site to witness an epic battle in the quarter-finals between defending U.S. Open champion Kelly Slater and Dane Reynolds. Kelly came out on top, only to be bested by Miguel Pupo in a wave-starved Semifinal. Then the Women took to the water, battling it out in the faltering swell. Carissa Moore and Lakey Peterson both put on great performances on their way to the finals. However, much like Kelly’s situation in Quaterfinal, waves were hard to come by for Carissa and Lakey capitalized with excellent surfing to take the win. For the Men, Julian Wilson made an impressive run by taking out John-John Florence and Gabriel Medina on his way to the top. I like to call him…wait for it…. The Rookie Killer! (Scary Music).

The award ceremony was lavish. Lot’s of screaming girls dying for Julian’s attention, or just a picture of him for their Instagram. Julian was visibly ecstatic (wouldn’t you be?) and gladly accepted his $100K.

Then, the wind picked up, as if to say, “Alright visitors, you’ve been here long enough.” So I finished my notes, packed my things and said my goodbyes. It wasn’t exactly easy to leave this town at the same time as 100,000 or so other people, but just like the rest of the week, it was an adventure. 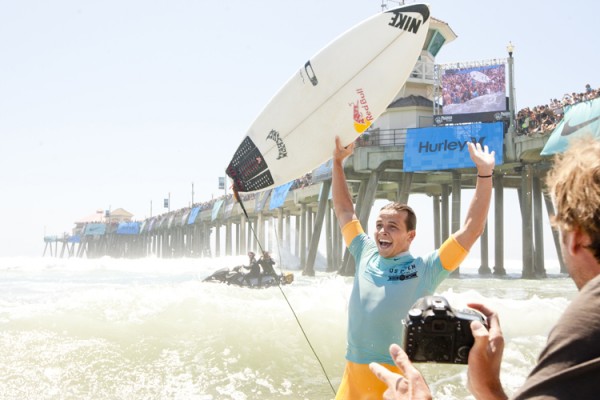 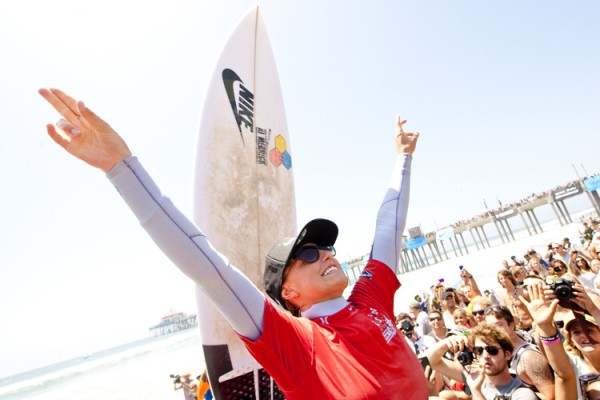