My Most Memorable Surf Session: The Day After a California Wildfire Torched My House 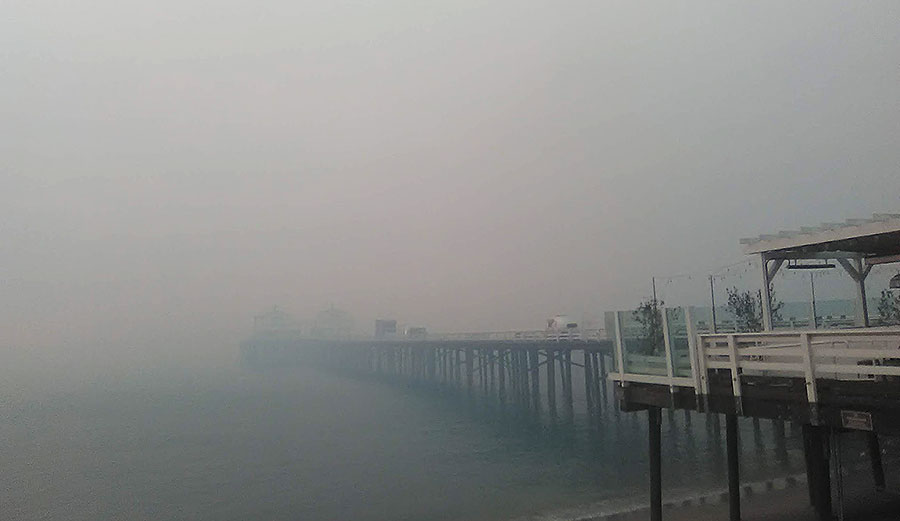 The Malibu Pier, lost in smoke after the Woolsey Fire ripped through Malibu.

On November 8, 2018, my house and nearly everything I owned burned to the ground in the Woolsey Fire. It was a shitty day and a shittier following few weeks. But there was one silver lining, made even brighter by the loss: the very next morning, I surfed pumping First Point Malibu with four people out. And no, I didn’t take a picture, but you can bet your bottom dollar it’s burned into my brain.

I’ve already written about the fire, but here’s a quick recap: I spent a few fun years building a little house in the Malibu hills. Mixed tons of cement by hand, carted innumerable pieces of lumber and plywood up the hill, turned every screw, banged every nail, plumbed all the water, and wired every outlet. Smashed my thumbs a million times, swore at the damn house a million and a half, and loved it more than any house I’ve ever lived in. Not because it was particularly nice (although I tend to think it was), but because I could — still can, in fact — picture every single thing inside those walls and out. And then, in the span of a few short hours, a raging inferno turned it into a smoldering pile of ashes. It was a big pill to swallow, but I’m pretty much over it now. 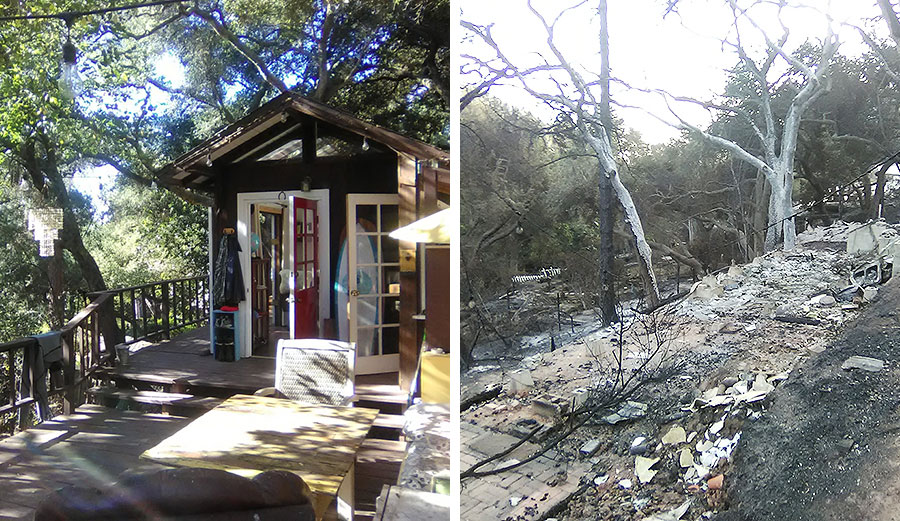 On the left is the before shot (obviously).

I had returned from a dusty van trip to Mexico two days before the fire and hadn’t unpacked yet. In my truck I had a bag of stinking laundry, a dinged-up old surfboard, my passport, and a whack of spearfishing gear. When I left the house that morning, I assumed, stupidly, that it was just another evacuation and I’d be back in a few hours. I was not. 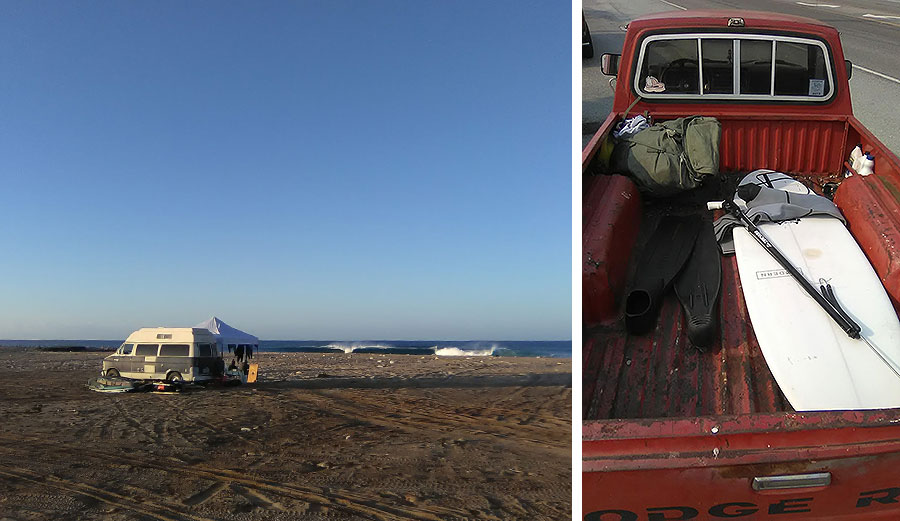 It was a good trip to Mexico. Sometimes, failing to unpack is a good idea.

I didn’t make it back to the house until six days later, by way of an old fire road I used to sneak past a bunch of police roadblocks. When I finally walked up the trail to my house, it was an odd feeling. Kicking through the rubble of your entire life is a bit of a mind fuck, as one might expect. At first, I assumed that a neighbor must have grabbed a bunch of my stuff, because there was absolutely nothing left. Surfboard collection gone, book collection gone, clothes gone. Everything, save for that meager pile of dirty laundry in the box of the truck. The whole street was basically gone, just a smoldering pile of ruined houses and the skeletal remains of the wonderful, sprawling oaks that ran alongside it. Of the whole street, there were three houses left, miraculously untouched while homes just a few yards away were turned into boiling, black smoke by hungry flames. Like I said, a big pill to swallow. But let’s talk silver lining now.

When there’s a giant fire like the Woolsey Fire, there are pretty strict evacuation zones. Cops stand at checkpoints, and once you leave, you’re not allowed back in. Depending on your address, certain people are allowed to certain areas, but my address was among the last to open back up. For the first few nights after the fire, I slept on the porch of a house on PCH. Years ago, a mudslide crossed the highway and basically swamped the house. A friend of mine had been slowly renovating it, and the owner was kind enough to let us stay there for a few nights. It was inside the evacuation zone, but on the very outskirts of it.

When I awoke the next morning after the fire, the salt spray from the waves that thundered on the beach below the deck had left me soaking wet. I hadn’t slept, exactly, but I had closed my eyes for a few hours. The horizon was an odd molten orange as the sun rose through the enormous plume of smoke that billowed out towards the sea before settling onto it, and a light offshore breeze blew wisps of smoke through the air like little bits of broken feathers. Everything aside from the sky was a murky grey, covered in an acrid haze. I’m not sure exactly what time I got up, but it was early. I’m sure a few stars were winking at me when I threw back my damp blanket, but the smoke made them invisible. My aunt, who lived on the property with me, was missing — she was determined to stay with her cats and her house until a fire engine came and screamed at her to leave — so I assumed the worst. I got in my truck and drove north down PCH towards the canyon road I lived up, not knowing exactly where she might be, but hoping I could simply drive back up and find everything intact. That hope was dashed by the first roadblock I came to when a tired-looking cop sipping coffee emerged from his car. “Nope,” he told me when I showed him my license with the street address on it. “You can go a little farther, but everything south of Ralph’s ( grocery store) is closed.” I thanked him and sped off, thinking I’d try and dodge the next roadblocks.

Driving north along that particular stretch of coastline, you get glimpses of the ocean in between the houses that squat on pilings in front of it. Despite the lingering smoke, it was clear that the waves were very, very good, and since nearly everyone had evacuated the day before, the roadblocks were in place, and it was just before real dawn broke, the highway was eerily empty. Rounding a slight bend, the Malibu Pier stretched out towards the horizon, the end of it lost in the smoke.

Not thinking too much about it, I pulled over briefly to have a look, just like I had thousands of times before. Despite living just a few minutes away from one of California’s most famous waves, I rarely surfed it — I hate crowds more than I love good waves, so I generally avoided the place. But First Point is a stunningly good wave, even with all the changes in the point the rapidly deteriorating sand is creating. Looking out over that normally-packed wave, I saw something I’ll probably never see again: head-high Malibu, mostly glassy with a ripple of offshore, and just four heads bobbing around. It was lully, but when a set arrived, it was about as perfect as I’ve seen it. Someone stroked into an easy one, stylishly executed a beautiful bottom turn, and cruised down the line to the sand. He kicked out, and slowly paddled to the point again while more waves poured through. The next three had someone on them, all surfed well. The fourth rolled through and turned into something very strange for Malibu: an un-ridden, perfect wave. I was out there.

Quickly, I pulled on a damp wetsuit that still had Mexican sand in it. Scrubbed a bit of wax on and walked across the highway, then down the stairs and onto the sand. For some reason, I didn’t feel rushed. Normally, when waves like that are in front of my face and no one is around to surf them, I am an Olympic-level sprinter, but this felt different. It felt like something I wanted to be sure I remembered. I stood there for a few minutes on that famous stretch of sand, peering through the haze as the sun broke through the great bank of smoke, and watched as another set whipped down the point. And then I paddled out and got one.

As it turned out, the other people in the lineup were burnouts too, each of them bobbing around just a few hours after their lives were burned to the ground. Although I wasn’t certain that my house was gone yet, I had watched from the highway as the canyon I lived in went up in smoke, so I was relatively sure. But aside from acknowledging that we were all in the same proverbial boat, we talked about the waves. We talked about the crowd, or lack thereof. We hooted at each other as we paddled back out and laughed at our good fortune at surfing empty, perfect Malibu. More than anything else, I think, that was what we all needed most in that moment: a way to forget, just for a few brief hours, how bad things were. Because right then, they were perfect.

Editor’s Note: Have a memorable surf session? Write it down (max 700 words) and send it to Alex@theinertia.com with the subject line “My Most Memorable Surf.” We’ll publish the best one and throw a gift bag full of swag in the mail (sorry, only available for those in the U.S.).