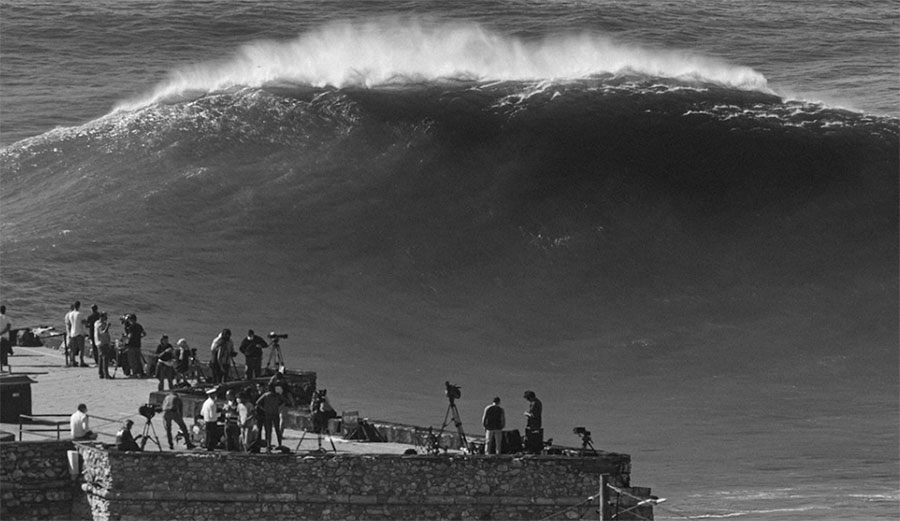 Surfing has officially been banned at Nazaré after the Century Swell attracted thousands of spectators in the middle of a pandemic last week. The decision, made by Portugal’s National Health Commission likely wasn’t an easy one to make — Nazaré depends heavily on tourism, after all, and the draw of the world’s biggest wave is one of the best attractions on earth.

“In the current context of the pandemic,” wrote Jose Antonio Zeferino Henriques, Lieutenant Commander of the National Ministry of Defense, “Praia do Norte, municipality of Nazaré District of Leiria, is prohibited for the activities of Free Surf and Tow-in Surfing, as determined by the Regional Health Officer of the Regional Health Administration of Lisbon and Vale do Tejo, due to the promotion of public crowding, which constitutes an increased risk for public health.”

Nic von Rupp, who is a stand-out surfer on the biggest days at Nazare, has mixed feelings about the decision. “Well, let’s see what happens,” he told me over the phone. “I mean, it was predictable that they would slow us down. There were 20,000 people on the beach the other day. People are in need of some action and some gatherings. They need to slow that down during these times of pandemic. They just want to cut the root off instead of putting in any measures.”

As of this writing, Portugal has seen 156,940 cases of Coronavirus with 2,694 deaths. The month of October saw a drastic spike in cases — from 854 on October 1 to 4,007 on October 31 — and the country has taken drastic measures in an attempt to stamp the virus out. I asked von Rupp if he had any idea why Nazaré officials decided to ban surfing instead of banning gatherings, which are decidedly more of a problem.

“It’ll probably eventually get to that,” von Rupp said. “They just need to be extreme right now. They were trying to kick people off the beach the other day. It’s just hard to control. You need a big resource, and I don’t think the municipality is willing to spend that money.”

While it’s not clear when the ban will be lifted, von Rupp is hopeful that things will change. And with three days of pumping swell already under his belt, he didn’t seem too upset. “We had three days in a row, so I’m running low on energy,” he explained. “There are so many other spots to surf here, and I’m happy with how the season has started so far. I doubt if there will be a swell like that any time soon. There will be good swells, but nothing like this. Probably when that swell comes, where it’s going to be perfect, I’ll be complaining if we can’t surf. But at the moment, I think at some point people will find a balance between surfing and not having so many people showing up.”

Garrett McNamara, the man who basically put the wave at Nazaré on the map, understands why the decision was made. He feels, however, that it might be a little too extreme. “On the small days, there’s no reason at all,” he said. “It’s totally unnecessary unless it’s 60-feet or bigger. Nobody comes for those days.”

McNamara thinks that officials are reacting to what happened on October 29, when the beach and the cliff were packed shoulder-to-shoulder with spectators. “They’re trying to make up for what they did,” he continued. “They’re making irrational decisions. Thousands and thousands of people were on the cliff, and they could have prevented that. Now they’re making decisions based on what happened instead of making decisions on everyday life.”