New York City’s Rockaways Are Gentrifying; Is That a Good Thing? 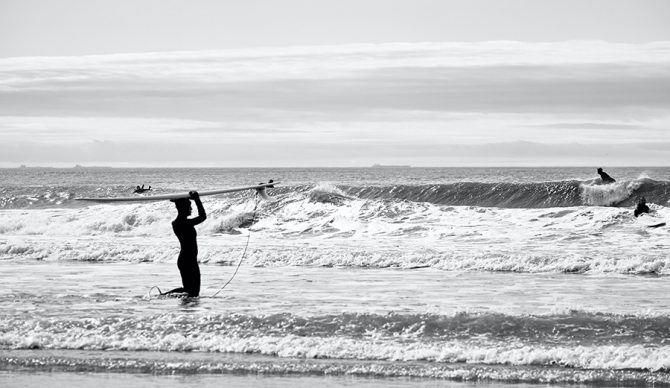 The Rockaways (or Rockaway, as you like) in New York City’s borough of Queens, have long been something of a dichotomy: the only truly oceanfront neighborhood in all of New York City, and yet somehow among the city’s poorest. But now, the region is seeing gentrification. And everyone is trying to figure out where they stand on renewal.

The better part of the past century has seen the Rockaways transform from middle-class, seaside resort and amusement park along the likes of Coney Island to razed slums and a sprawl of beachfront public housing projects. To the south lies the vast, mostly wave-less, bleak seascape local surfers not-so-affectionately refer to as “Lake Atlantic.” To be fair, it has its days, and a core group of local surfers would surely attest to that. Towards the city is a diminutive view of metropolis across a narrow bay of wetlands and some eight miles of urban sprawl.

Once upon a time and into the mid-twentieth century, the Rockaways were host to rows of middle-class  summer cottages, resorts, and amusement parks. Then, ironically in the wake of post-war prosperity, things took a turn for the grim. With the increasing widespread availability of the automobile, outer-city neighborhoods slowly found themselves left in the lurch, with new roads taking precedence over the continuing development of a public transportation infrastructure (see Robert Moses).

Along came the American Housing Act of 1949, another veritable Trojan horse to the already-duped community, and arguably the coup de grâce. Among other things, it granted federal funding for “urban renewal” involving “slum” clearance — many beach bungalows were razed in the process, too — and more than 800,000 public housing units. It sounded like a nice idea, but in the end, the initiative destroyed more housing units than it ever built.

Long before all of that and at the time of Dutch arrival in “the new world,” it was once a quiet farming and shellfishing outpost known to the Native-American Canarsie, a band of Lenape people, as “Reckowacky,” possibly meaning “place of sands” in Munsee (an Algonquian language). 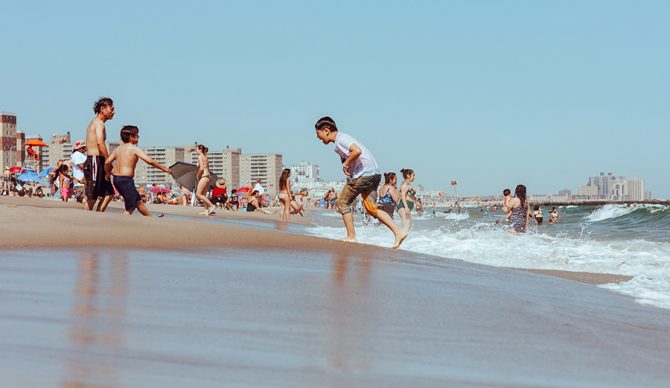 By and large, the sands remain, but due in large part to a continuing onslaught of what seem to be ever-intensifying hurricanes and tropical storms, they’re shifting. Another reason might be the recent up-springing of Airbnb and VRBO rentals, along with any number of new restaurants with trendy rooftops, independent cafes, surf shops, and even a four-star hotel, with spa, sauna and all.

But the question remains, is this all a good thing? As with any case of gentrification, the answer is complicated.

For reasons that are probably due to the relatively recent decentralization of New York City, the pandemic-induced work-from-home model of employment, and perhaps not least of which a serious uptick in the popularity of surfing, Rockaway real-estate value has more or less doubled over the last decade.

Fifteen-year resident Lou Harris, the founder of the Black Surfing Association’s Rockaway chapter, has witnessed much of the transformation in the water and out. He was once the only Black person out plying the waves during most of his sessions: “I remember 14 to 15 years ago, people would be staring at me. Now it’s just like, they don’t even look at you. You got black girl surfers, young kids trying it.”

During warmer months when less than five or six millimeters of neoprene is required, Harris runs daily surf lessons on the beach, as well as skateboarding lessons at the newly-erected Rockaway Skate Park. In the winter, he offers swim lessons, often hosted at the Rockaway Hotel and Spa, a four-star establishment resplendent with floor-to-ceiling windows, a rooftop deck, and all. “They’re mostly Black kids, but we’ll get some white kids…I bet they never thought a Black guy with tattoos would teach them to learn how to swim,” Harris chuckles.

Harris himself has been something of an attraction and a beacon of light for the community. Since founding BSA Rockaway, he’s been featured in Rolling Stone, GQ, The New York Times, CNN, Men’s Journal, and far too many local and national outlets to mention. He’s starred in the YouTube-based children’s series “Surf Guard,” and organized several paddle-outs in support of the Black Lives Matter movement and in recognition of indigenous peoples, the latter of which he organized with the Rockaway Hotel and Spa.

He’s since caught the attention and support of professional surfers, celebrities, and sponsors including Red Bull and Vans. This past Christmas he joined forces with the local 100th police precinct to dress as Santa Claus and parade around, delivering free Vans to children.”

All in all, he’s hopeful: “I’m 50 years old. By the time I’m 75, this area here in Rockaway is gonna be heavily, heavily desegregated.”

According to Banjo, there’s a widening gap both between Rockaway residents across various socioeconomic divides and between the Rockaways and greater New York City. According to Banjo, the solution lies in cooperative economics: “learning, growing, keeping those resources that are in our community, expanding upon them, and growing together.”

“Don’t be discouraged,” Banjo says to those feeling whiplash in response to recent developments in the neighborhood. “Feel empowered. Don’t feel misinformed, be informed. People don’t want to live in downtrodden, disinvested environments. They want improvement. They aspire to have parks. The problem with gentrification comes when they’re not involved in that process when those occasions arise. Everybody wants to be a part of something. Especially in the place you live and grow, and where you raise your family, you want to be a part of that as well.”

Gentrification can be, and clearly has been, the culprit of many a dissolved community, but organization, initiative, and hopeful leadership can go a long, long way. So too does a little dose of good old Hawaiian aloha and the toss of a shaka.