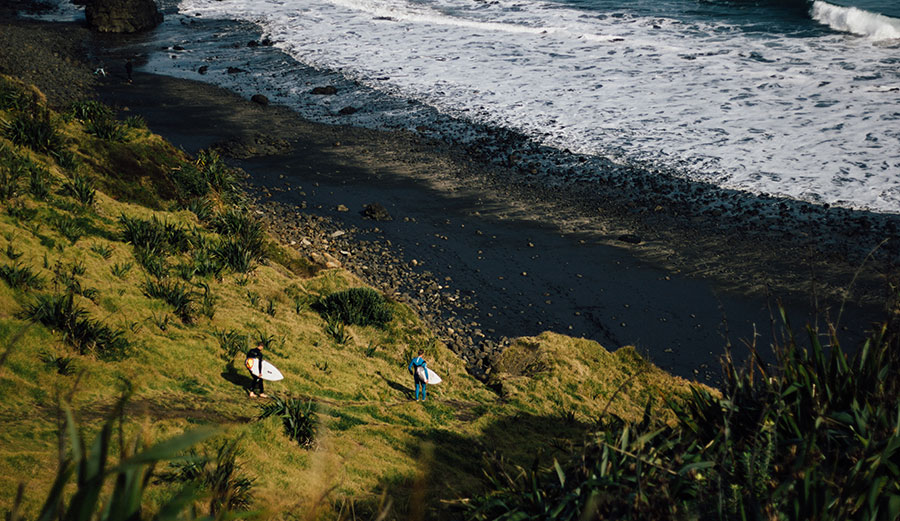 Surfers at Maori Bay, up the coast from the shootings. Photo: Tim Marshall/ Unsplash

Localism is part and parcel of surfing. Nearly everyone has experienced some form of it, whether it’s a simple dirty look, a cruel word flung over a shoulder, or something more serious. Remember that time Kelly Slater had his windows waxed? But what happened recently in New Zealand is far more than localism. Someone shot at a group of surfers in Waikato’s Taharoa area, and while it hasn’t been confirmed that it was indeed an act of localism, it sure looks that way.

Waikato is a small region on New Zealand’s North Island. On Thursday, a group of three surfers that included a 14-year-old were surfing at a spot near Kawhia when three shots rang out. At first, the surfers assumed it was merely hunters in the area until a bullet hit the water near the 14-year-old. According to Stuff, “Police believe whoever fired three shots from the coast south of Kawhia took exception to three surfers using their waters.'”

After the shots, the surfers spotted a pair of people on a bank overlooking the wave. The two men began screaming obscenities at the surfers. “It is extremely dangerous and if you put yourself in the 14-year-old boy’s shoes,” Ōtorohanga police Sergeant Andy Connors told Stuff. “Extremely frightening.”

The trio of surfers immediately returned to shore, then called the police. The wave is well-known as an invitation-only spot. “Ever since I have known the place and the people that have cared for it, it’s generally been by invitation,” Daniel Kereopa said. “It’s one of those places that is still New Zealand – not affected by tourists, not promoted. People live there because they are born for that land and, unfortunately, it’s brought some attention by what’s happened down there.” He went on to explain that there are two ways to get there: either with the landowner’s permission or by water, the latter of which is how the trio got there.

Although it is certainly taking it a step too far, Kereopa alluded that he does almost understand why it might’ve occurred. “It’s one place that is so unique, you don’t have to hassle anyone for the waves,” he said. “If people ask you to surf down there, and they’re from there, then that’s the way it is. If you don’t get asked, you shouldn’t think you deserve to go down there.”

Despite that, however, he does feel for the surfers. “So damn scary,” he continued. “I have lots of remorse and aroha for them. No one wants to have a 14-year-old kid be traumatized by this.”