Super Bowl XLVIII: Why Surfers Should Totally Watch It 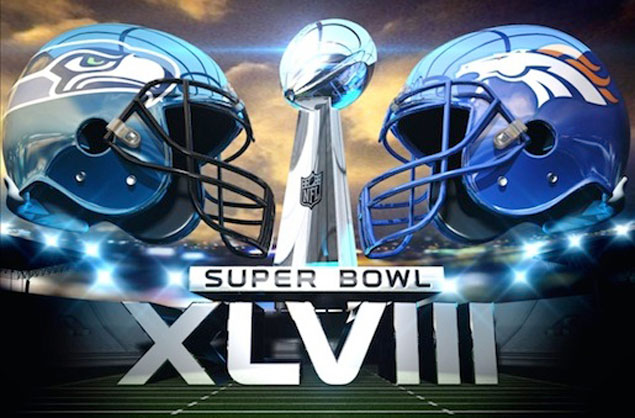 It’s the Super Bowl on Sunday! The NFL Super Bowl XLVIII! You should totally watch it! There are just so many reasons for you to stay in on Sunday and watch the Denver Broncos bang into the Seattle Seahawks, none of which involve surfing. Well, maybe one, but I wouldn’t worry about that one, if I were you.

First off, it’s going to be freezing for Super Bowl XLVIII. The forecast is calling for a whole shit storm of awful weather, including temperatures in the mid-30s, which, for all you non-Americans, is right around the freezing mark. There’s a good chance of rain – and if you live somewhere with temperatures around freezing, you know that little place between rain and snow is pretty much the worst place ever. Freezing rain is science’s equivalent to the Bible’s hellfire. It’s really bad. But oh, how wonderful to see football played in such inclement weather while we sit warm in our houses gorging on processed cheese and Pork Rinds! That’s right, put your feet up on your ottoman and see how much beer you can drink. Scream at the television and high-five your bro friends like you watch football all the time! Wear your best Denver Broncos jersey or Seattle Seahawks hat, and if you’re really lucky, your wife will dress up like one of the cheerleaders. Then when Tom from next door comes over, he’ll know that it’s not only your perfect green lawn that’s better than his, it’s your wife, too. And what better place to do that than while you’re watching the Super Bowl?

And it’s not just the friendly competition and screaming that’s so great. Sure, violently spewing out partially chewed nachos and warm beer at the television is fun, but the commercials are almost as good, if not better, than the game and all your spittle-chucking vocals. After all, the companies are spending upwards of four million dollars for a mere thirty seconds of your time. Why would they spend that on something else? Thirty seconds is well worth it, right? There is nothing else in the world that a cool four mil is better spent on than a fleeting chance at entering your home and maybe, just maybe, convincing you to buy another can of Coke. NOTHING. Imagine if you missed those Super Bowl advertisements? What would you talk about for the next six months? What would you try and find on Youtube? And really, in today’s world when something can go viral for free, like Scarlett Johansson’s banned Super Bowl ad (it was too racy… it has nothing to do with slighting Coke and Pepsi, two of the Super Bowl’s biggest sponsors), why wouldn’t you spend an insane amount of money on thirty seconds?

Of course, if you didn’t watch the Super Bowl, you’d basically be the worst American ever. It’s almost a national holiday! Don’t you love America? The land of the free? The home of the brave? By not celebrating giant men battering each other while taking in more calories than an entire African nation could use in a year, you’re pretty much a communist. If you don’t celebrate the gluttony that your forefathers fought for you to have, you might as well move to Germany, circa 1950.

It’s just unpatriotic to not watch the Super Bowl. You should be waving a flag and shooting rounds into the air, because, God damn it, it’s your RIGHT as an American citizen to be as loud as you want when you watch football – and not that pansy kind of football with the skinny guys and euro-haircuts, either. The REAL football, where it doesn’t matter that there really isn’t too much actual foot on the actual ball. REAL football, where men the size of industrial refrigerators run at speeds you could never reach into much smaller, faster men, like a rhino hitting a squirrel. REAL football, where you can get a hotdog the size of your leg and a beer the size of a kiddie pool!

So it’s decided, then? You’ll watch it? You’ll invite everyone you know? Good. I’m going to go surfing, then. The forecast is looking good.