Nicaragua and the Chance Discovery of a ‘Tube Rider’s Dream’

Editor’s Note: This feature is brought to you by Chancletas Beach Resort.

There are certain waves in the world synonymous with adventure, discovered by surfers looking for more than just a ride. Getting lost in yourself and a culture, and stumbling upon a wave of lifetime. The Boom in northern Nicaragua is one of those perfect discoveries that mixes a beautiful culture with a “tube-rider’s dream.” And Shay O’Brien, owner of Chancletas Beach Resort, is a living testimony to that dream – moving his family to the area two decades ago after stumbling upon The Boom while on the search.

O’Brien, the lone man in a family of five, moved his clan to Nicaragua in the early 2000s after a career in the South Florida movie industry.

“When my wife Loretta told me she was pregnant with our first child I was so happy,” O’Brien remembers. “But I told her we would have to move to a place where we could live a surfer’s lifestyle. Loretta and I both started traveling to Nica in the late nineties, so when I said let’s do a business in Nica she was all for it. We’ve raised our girls to be bilingual, ocean lovers, and coconut openers who love people. Loretta is so strong and has held down the business since the beginning. Our girls (Jalen 19, Sashi 16, and Leela 13) will be ready for college soon, and so far they say that they want to stay in Nicaragua.” 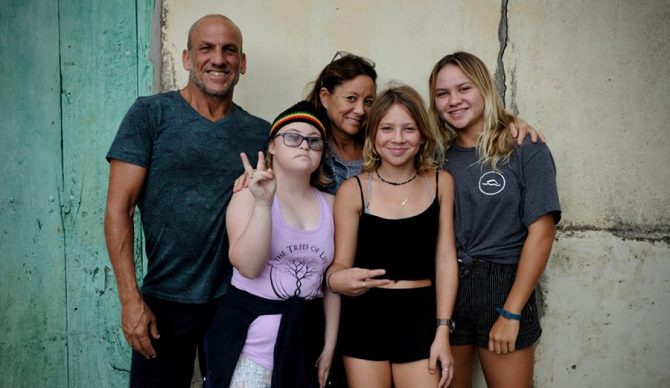 Shay and all the O’Brien ladies. Photo: O’Brien family

Like many of us, Shay has always searched out empty waves. He learned to surf at 14 in Miami Beach with his older brother. After riding with crowds for most of his life, he needed something else. Hacking away at jungle trails after hearing rumors of good surf on remote Central American beaches was something he lived for. “Nobody showed us the waves in Nicaragua,” he said.  “We just went looking.”

As fate would have it, he stumbled upon an amazing beach that would change the trajectory of his life, and his family’s. “We would get stuck in the mud, bit by mosquitoes and show up to spots when the wind had gone onshore, but we were persistent,” he said. “When we stumbled upon The Boom it was low tide and onshore, but you could tell it wasn’t your average beachbreak. The next morning changed our lives and surfing in Chinandega forever.”

Shay and his traveling partners’ instincts was to check the beachbreak and its well-formed sand again in the morning, when the tide would be full and the winds offshore. “We pulled up and it was so good we were literally jumping up and down on the beach and throwing our hats in the air like a high school graduation,” he laughs. “From that day on we were hooked, we knew she was special, so we named her ‘The Boom’ after the poundings she gave out. That was 1999.” 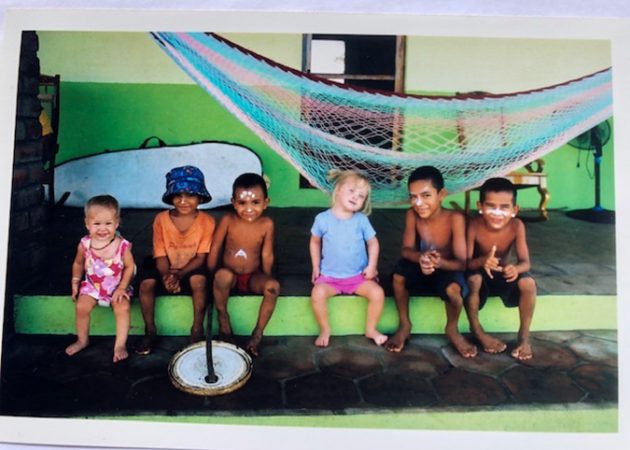 The O’Brien girls with the local crew back in the early days. Photo: O’Brien family

Shay knew he wanted to be in Nicaragua and began eyeing land. In 2003, he found a beautiful 23-acre parcel on a hill overlooking the ocean. He negotiated a deal with the peanut farmer who owned it and hired a young local attorney to finish the process, still one of O’Brien’s close friends today.

O’Brien and his wife planted coconuts, hired locals to help with everything from caretaking to surf lessons (many of whom have been with them for 15 years), and opened Chancletas in 2004. They haven’t looked back as the resort has become a staple of the community.

The Village has changed a lot since then. There are paved roads, internet, and it’s a bustling surf berg. Many of the kids who learned to surf with O’Brien in the early 2000s, when he first started hosting surfers, are now ripping at nearly pro levels ( he probably gave most of them their first boards).

“Now everyone has so much opportunity because of surfing,” he says. “All the boys fix dings, take pictures or work as guides and instructors. Surfing has opened up so many bridges for them and they have so many friends from all around the world.”

Chancletas now offers surf trips, fishing charters, jungle and volcano tours, and all sorts of trips catered to adventure. Because that’s where it started for O’Brien. “Up until recent years, we were just a word-of-mouth operation that relied on mostly the same guys coming back year after year. It was like family,” O’Brien says. “We were the only surfing place in town and had so many loyal guests that would come year after year. We cherish those memories. But the future is bright and we enjoy this town so much, and especially the waves.'”

Discover The Boom for yourself by booking a stay with Chancletas, here.