Noah Hill’s surfing career path does not resemble a straight line. Not even close. He’s navigated injuries. He’s treaded through the “why isn’t this guy sponsored” mania. He even took an extended break from it all, considering a life where surfing doesn’t pay the bills.

He’s gotten himself back in the mix, though, major sponsor and all. Noah’s fresh off a trip to Indo and a new edit to show it all off. When I set up a time to chat with him about Momentary Pleasure, he mentioned that his schedule’s pretty flexible. He’s recovering from surgery, he said, so he has the downtime.

Uh oh. What now? It turns out his latest bump in the road was an opportunity to talk about a health concern that should be top of mind for more surfers.

What was the surgery for?

I had melanoma on my back. It wasn’t fun.

What’s the procedure for something like that? And the recovery?

The procedure is pretty simple. The first time I went in they just did a biopsy, they took the mole off and sent it to a lab. And then once they found out what it was they could treat it better. They made a 10-by-10-centimeter circle and tried to cut it all out and then just zipped it all back up.

Are you out of the water now for a while?

I started dealing with this at the beginning of the month (early July). I had the procedure a couple of days ago now and they said stay out of the water for about four weeks, but that’s more for the sutures to heal. There are two layers of internal sutures and then one layer of surface stitches on the top. 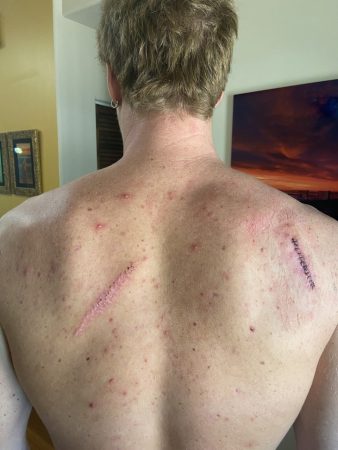 “A lot of the people I surf with are pretty fair-skinned and we never really think of it because we’re so young. But age doesn’t really matter when you’ve been out in the sun since you were three.” Photo: Noah Collins

It sounds like it’s a blessing they caught it early.

It’s a good wake-up call. I’m glad that it happened now. I have a lot of friends who went to dermatologists, got checked, and a lot of them ended up having little things that needed to get removed. A lot of the people I surf with are pretty fair-skinned and we never really think of it because we’re so young. But age doesn’t really matter when you’ve been out in the sun since you were three.

Yeah, I feel like it’s something we (surfers) don’t really talk about a lot relative to how much time we spend in the sun. I wear a little sunscreen but not all the time. I’m pretty bad at it myself.

I’ve never heard much conversation about it either. But from my experience now there has to be a lot of people dealing with it. I’m only 20 and mine was pretty advanced already.

Did the doctors tell you there were things you should have done differently or outline things they want you to do to be more careful now?

My first doctor was kind of just trying to scare me, basically saying I shouldn’t pursue surfing as a career anymore. Like, “That’s not gonna work for you.” But my surgeon was a surfer. I was under a local anesthetic so we were just talking the whole time and he was like, “Yeah, man, you just need to be more thoughtful about it. Take whatever sunscreen you have with you out in the water. You gotta come in every hour and a half to reapply on your body. And you have to be careful about when you’re surfing during the day.”

I’m guessing that was along the lines of, “High noon is not the best time to be out in the water starting a four-hour session.”

Yeah. But the nice thing is the UV index does really drop off after about 5 p.m. It becomes a lot safer to be out in the sun, and then early in the morning as well. So you can pick your windows.

This feels familiar. I feel like a constant conversation for you is catching the injury bug throughout a lot of your career. And people are always watching you surf and asking,  “Why is this guy not carrying more sponsors?” But you’ve linked up with Body Glove now and I’m guessing that’s a big turn.

I honestly had to take a break from it all. Like you’re saying with all the injuries, those are big character builders for me. I’ve learned a lot about myself. So after all that I needed to take some time off and see where I really wanted to go with my life. Having support from them (Body Glove) has been huge for me. I wouldn’t be able to make any of these video parts or have the freedom to support myself by surfing for a living.

It sounds like the forced downtime gave you clarity.

It was never a conscious choice. It was more of just having all this empty space in my life. I wasn’t able to do anything, waiting for surgery, waiting for stitches to heal, and it was more that life kind of slowed down. I was in this zone of contemplating, and there was this small voice inside of my head trying to talk to me with some sort of reasoning. And that was a little scary, especially when it wasn’t true. It was definitely a catalyst for having a long conversation with myself.

I just need to be more disciplined about how I’m taking care of my body, both from an athletic standpoint and a health standpoint. Obviously my skin now. Just full circle well-being — it was a wake-up call for everything.

So where are you focused career-wise now?

I’m definitely pursuing the freesurf route. I haven’t done a contest in maybe three years now. I do have this love for competing ingrained in me because I was competing from a really young age and I like the challenge and the competition. But I’m also in a different headspace now and it’s tough to be competitive.

I feel like the competitive aspect probably zaps your creativity.

A little bit. Definitely in the sense of expression of how you’re riding a wave. I feel like I surf with more intention now. I surf a wave the way I enjoy surfing a wave, not to get a score. And it’s definitely a different way of surfing.

I have some other things that I’m working on with friends. The goal is to have our own production company so this all doesn’t have to be something that’s just surf focused. It can be other things like short stories, short films, and really highlight people we feel are talented in their respective areas. Right now for me, the only funding I get is from Body Glove, so if I wanted to create something about somebody else I wouldn’t be able to get funding for it. But with a production company, we can branch out. I love surfing and that will always be the thing I love most in life but I also find value in a lot of other things.