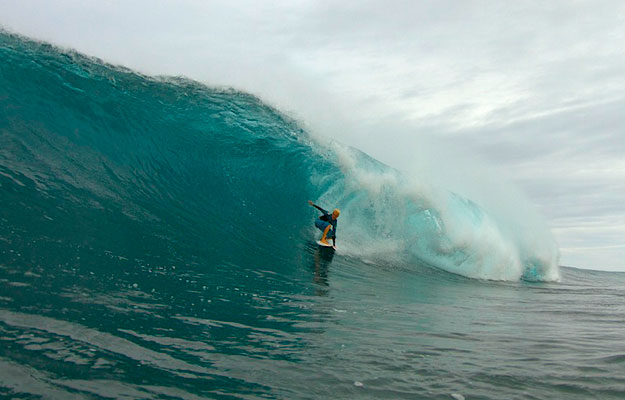 While the redirected swell may have been good for surfers in Russia and in Alaska (Sarah Palin was saying, "I can see triple-overhead sets from my house!") it didn't produce the winter surf the North Shore is accustomed to. Photo: Anthony Walsh

By mid-November, the holding period for the Triple Crown began, and uncrowded sessions were no longer happening. Everyone was officially here. You could tell by the traffic and all the shiny new rental cars packed in like sardines at every popular surf spot. Or by the fact that you would run into at least five guys in the Top 45 every time you went to Foodland.

Yep, everybody was here for the Triple Crown of Surfing, where the surfers in the world come to test their skills in pumping Hawaiian surf. Unfortunately, La Nina had a different plan for the Triple Crown this year. A high pressure system posted up north of the islands and threw a monkey wrench in the wave machine. Swells heading our way were blocked faster than a Kung-fu punch aimed at Bruce Lee and deflected north. While this may have been good for surfers in Russia and in Alaska (Sarah Palin was saying, “I can see triple-overhead sets from my house!”) this was not producing the sizable winter surf the North Shore is accustomed to.

The Haleiwa event got a day or two of decent surf but had to run a lot of rounds in dreaded two-foot mush. That’s been known to happen at Haleiwa. It was still early days and Sunset would surely produce something massive… Or would it?

With time running out and no big swells on the horizon, Randy Rarrick was forced to run dual heats at Vals Reef and Kammie’s under rainy skies. Competitors swapped their Sunset guns for shortboards and turned the entire stretch of Sunset beach into one big skate park.

Surfer Poll was held in Hawaii for the first time ever at the Turtle Bay Hotel. Everybody agreed that it was much better than having it in Anaheim (Everybody except the disgruntled people in the lobby who didn’t make it on the guest list).

The Billabong Pipe Masters holding period began and small surf continued. The conditions were lovely, though: small glassy waves and sunny days. Groms from Off the Wall to Rocky Point rejoiced, but I actually saw Bevo (Claire Bevilacqua) clock more water time than anyone.

The forecast looked hopeless. They raced through the first few rounds of the contest in shoulder to head high surf  at Off the Wall, Backdoor, Pipe and Gums. It looked like it was going to be one of those anti-climactic finishes to the Triple Crown. With a moderate northeast swell on the rise, contest organizers gambled and won. For the final two days of the contest Backdoor was on fire!

Every time I looked up someone in a jersey was getting spit out of a barrel. Kelly, Dusty, Kieren Perrow, Dane Reynolds, and Jeremy Flores were some of the standouts. The conditions stayed clean throughout the day and the incredibly lucky four women who got to surf in the “Duel For The Jewel” heat, scored the best contest surf they had seen in years and proved that the top women deserve an event at Pipeline.

Joel Parkinson and Stephanie Gilmore took the Triple Crown, and as just as quickly as the winter season began, it was all over. The scaffolding and tents are packed away, and in the days that followed a constant stream of rental cars with boardbags packed sky-high headed towards Honolulu International Airport. -KK