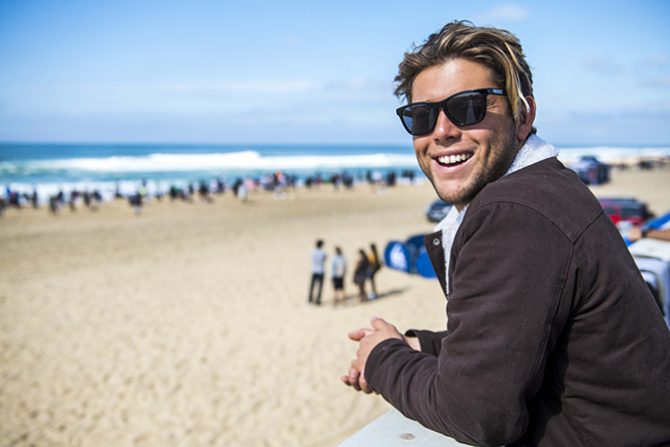 Conner Coffin ended seventh in the world last year. With a rail game like his, anything’s possible. Photo: Ryan Miller

Chatting with Conner Coffin, it’s tough to tell if he’s an old soul, or just a complete throwback. A more mystical person might say old soul but maybe he’s just a bit of both: he surfs very well with his rail, listens to classic rock and roll, and looks at the world around him through a decidedly old-school lens despite being just 25: “Do what you do. Don’t talk about it. If your ability is worthy, people will notice.”

Maybe that’s why the Santa Barbara, California native has flown under the radar until recently. But when you finish among the top ten in the world, flying under the radar is no longer an option. Your surfing has earned its praise, and the microscope becomes a little more trained on your every move. I caught up with Conner on the cusp of his fourth CT campaign.

I wanted to ask you about Chris Brown. I know he was a huge part of the Santa Barbara community.

When I was growing up, Brownie was part of the Rincon Pit Crew. I remember seeing Brownie surf so much and he was the epitome of a Santa Barbara surfer–a pro for a lot of years, an urchin diver, he charged big waves, and he was a super humble, genuine guy. He always told my brother and I how proud he was of us. I looked up to him as a surfer and as a person. He always had time for everyone. It’s a really big bummer that happened. It’s sad for the whole SB surf community.

And you ended up giving his daughter your winning check from the Rincon Classic?

I went to his paddle out and I’d never met his daughter. The contest was in memory of Chris so I was stoked to pass on a little money. A thousand bucks is not gonna change her life but it was the least I could do. That’s fucked up, losing your dad and I just hope the best for her and her family.

The circumstances of his death were really gnarly. What do you think about when you hear the word meth?

It trips me out. A lot of people I know and looked up to have had troubles. They’re often super rad people that have just struggled with addiction, drugs and alcohol. Outside the person seems so cool, they’re so great to other people, so giving and caring for other people, but they’re obviously struggling inside and using drugs to deal with that. Chris never took time to figure his stuff out. He was always giving to other people, such a good dude. Brownie has kinda struggled since he was my age with partying and drugs. It’s just hard for people once they get on that slope, it’s pretty slippery

It seems that stuff like that still happens pretty often in the whole pursuit of waves.

The old way of surfing was pretty loose. The party scene, even for me and my friends, it starts as fun, but some people fall into drinking, some take it further, some don’t. Unfortunately, it ended up kind of getting him. Some of my friends and I were talking the night before (Chris’s accident) happened and knew he wasn’t doing great, but we were kind of too late.

This is kind of a strange year on tour. It’s a de facto Olympic qualification season, really. Are you pretty dialed in with what you need to do to make the team? Are you thinking about it at all?

So ten people come off the tour to make the Olympics. If all the Americans did super shitty, there’s a chance we won’t have anyone in. But most likely there will be two Americans in the top ten. I would have been in last year.

But for me, it’s not changing my mindset at all. I’ve gotten all my ducks in a row for the tour, and keep working on all the little things to lift my game up, building on a positive mindset, and just keep pushing. The Olympics is great, it would be really fun to be part of the ceremonies. But for me, I’m not adding any pressure to the deal or trying to change how I’m doing things at all. I think it’s cool that Kelly’s fired up to give it a go, but I’m just staying focused on my deal and cutting that stuff out.

The media is pretty hyped on it. Speaking of media, the surf media has been really ravaged lately, just curious, what are your thoughts on surf media as it is?

I think it’s pretty lousy, to be honest. Surf media used to be rad. It had actual journalism in the magazines. You could open one up and read a bitchin’ profile that was in depth and someone talking to the actual writer. I miss that. Now it’s just set up like click bait, and half the time shit’s not even true. And a lot of the media around surfing is negative in a weird way. Everything’s played out to be a bummer. I miss reading stuff where a journalist goes and actually hangs out with the subject and you’re like, “This person is rad.” You know, factual stuff.

Yeah, the media can add tension, I suppose. But what do you think adds more tension or pressure, the actual media put out, or online commenters?

A little bit of both. For me, I probably don’t pay attention to any of it very much. I read stuff about other people and I’m like, “Why would you say that about that person?” It’s so lame, someone sitting behind a computer, you can say whatever you want, no one’s going to know who you are. I sometimes feel like growing up, I kind of flew under the radar with the whole media thing. People around me were getting lots of attention like Kolohe (Andino) or Evan Geiselman. On tour there are so many guys that are higher profile than I am, the spotlight was never on me. I can get hurt and there aren’t eight articles on it, “Conner Broke His Shoulder,” or went “Surfing in a Speedo.” I’ve mostly been able to do what I want. Every once in a while I can kind of get fuel off the thought that people don’t think you can accomplishment something.

I guess it’s like a narrative gets written on you and people go with it, like “Filipe can’t surf big waves,” or  “Conner Coffin can’t do airs.” But I’ve seen you do airs.

My brother’s insane at airs. I like to do airs. But getting on tour, what are my strengths? What is my likelihood of doing one in a heat? It’s likely not gonna be as good as Filipe’s and Gab’s and John’s. My power surfing can get big scores. I’m better at using my rail and that’s what I love to do. Why not focus on that? On tour most of the contests can be won without doing an air. So I’ve honed in and built on it. I still like to do airs, and if I’m competing in a place like Brazil, I might need one.

I finished seventh in the world without doing an air or going too far out of my comfort zone. I’m constantly building on that and I think if people think I can’t do airs, that’s even better. I feel it’s a little bit of a point of difference: everyone can do a reverse.

You were part of one of the best heats of recent competitive history. Do you have to watch it online to remember what happened? It seems like there’d be so much adrenaline in the moment it’d be hard to remember every detail.

I remember that heat like it was yesterday. It was probably the most fun I’ve ever had surfing in a heat even though I lost going up against the best guy in a world title scenario, at my favorite wave to compete at (Pipeline). I wasn’t nervous at all. I’d made it through a couple of heats already. I was fired up to get barreled at Backdoor and felt myself click into that space where I was super on. I felt great at the beginning of the heat. But when Gabriel got nine something on the left where he had priority, I heard the crowd and I was like, “Fuck, I need to get another good wave.” Two backdoor waves came, the first was a closeout, the second I thought (might stay open). After I pulled through the back of it I was like, “That was a mistake.” He got priority, got the 10. One thing I learned, when the beach was going crazy, I let that get in my head instead of playing that heat like I’d played others. I got emotionally drawn into the beach.

It’s been so nice to have a solid three week stretch at home to dial everything in for the 2019 season to kick off as well as enjoy some time partaking In extracurricular activities. Love sitting in the garage at the end of the day and noodling away….. ✌🏽🇺🇸🌹 Pic: @jasonbaffafilms

So, outside of competition, you’re a solid musician, too. Where do you put music in your life?

For me music has always been something that I love. And more than anything it’s just a creative outlet. I enjoy picking up a guitar any time of day, anywhere, when the waves are flat, win or lose a heat, I can unplug. That’s where it is for me now. I’ve kind of put it on the backburner. Surfing is my focus. Sometime when my surfing career tapers down I hope to record some more music and maybe make it a bigger part of my life.

That’s kind of in line with other great Santa Barbara surfers like Tom Curren.

For sure, Tom’s been one of my favorite surfers since I was a little kid. I’ve studied his surfing day in, day out since I was 10. He’s still my favorite surfer, along with Dane (Reynolds) and Bobby (Martinez), Brownie, guys I watched a ton as a kid. To me, Dane is still one of the best surfers to ever touch a surfboard. There’s a lot of naturally-talented people from where I’m from. And they all have the same mentality: shut up and do your thing and don’t talk about it. That’s what I’ve taken away the most from the Santa Barbara community is this kind of humility everyone carries. You don’t have to listen to anyone chime in, everyone has a lot of respect for each other, people keep their mouths shut and let their surfing do the talking. That upbringing kind of goes back to what we were talking about with the media: I just don’t care (what people say). I do what I love to do, people can say what they want and I get to go surfing for a living. I’m still winning, regardless.