Opinion: Adjustable River Waves Are a Better Option Than Surf Parks Will Ever Be 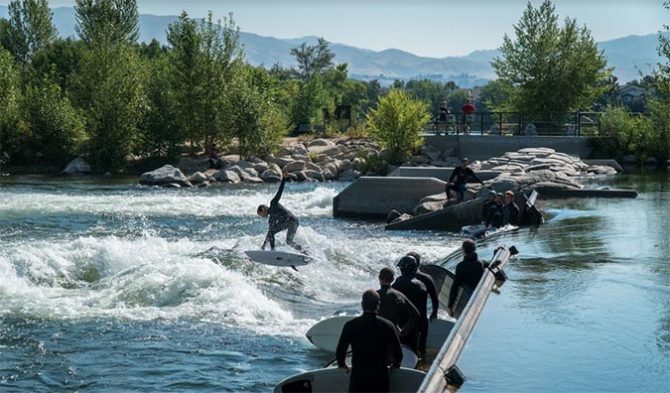 Adam Winspear gives one little pump on the open face then holds his line as he zips across a wave near downtown Boise, Idaho. The man-made feature built on the Boise River—at standard water flows, approximately 15 feet across—is fast and unforgiving with a steep shoulder on the surfer’s left side (a goofy-footers’ delight).

Just as he’s about to reach that steep shoulder, Winspear, who grew up near La Jolla, California, takes a mini bottom turn and slams his tail into the shoulder in what would be considered an off-the-lip maneuver in the ocean. Water sprays into the air, soaking the surfers waiting in line on a hot summer’s day.

“Throwing buckets!” says someone in line, who hails from Hawaii. The funny thing is, most of the people with boards under their arms waiting for a turn and sprayed by Winspear have probably never heard that surf cliché.

“Throwing what?” says someone else, almost on cue.

There’s a new generation of surfer developing across the country thanks to the artificial wave movement. Highly publicized wave parks are popping up everywhere as surfing becomes further commodified. The Inertia has been on the front lines, covering these new Disneylandish parks, like Nland Surf and BSR Cable Park, both in Texas, that feature nearly perfect models of ocean waves. But they don’t really fit the ethos of surfing: that water time is for everyone and should inherently be free. That surfing, which has long been considered a symbol of freedom and an act of artistic expression instead of sport, is something that all should be able to access in some form. Ninety bucks an hour for experts at BSR? Fifty-grand per corporate session at the Kelly Slater Wave Ranch in Lemoore, California, which isn’t open to the public and probably never will be? That definitely doesn’t sound like surfing.

As Winspear (below) ripped across that wave in Boise he wore a simple surf-industry wetsuit and rode a board shaped just down the road that probably cost around $500. Along with a set of fins, that’s all he really needed to enjoy the wave. There were no exorbitant fees or waiting lists. He simply jumped in the water to catch a few waves at lunch. And while expensive, gaudy (and exclusive) surf parks or ranches will continue to get the press, adjustable, in-river features are simultaneously being built with little fanfare at a third of the cost for communities. These river waves serve more purposes while likely developing better surfers (paddling up-river to get back to a wave is hard work). All while more closely matching the true surfing ethos. And it’s pretty easy to explain why.

First off, the sheer cost of wave parks is fairly outlandish, even in the surfing world. A CNN report in May that profiled the Kelly Slater Surf Ranch asked this question: “Is $30 million wave the future of surfing?” Being closed to the public and costing $50,000 for group sessions, it’s a legitimate ask. Having attended the Surf Ranch Pro in September, it’s clear that the wave is nothing short of an engineering marvel with its open wall and perfect, barreling sections. But a primary purpose for spectators to attend a surf contest had been killed. Instead of being able to sneak away for a surf down the beach to perhaps break up the monotony of a round like one would at a contest on the beach, spectators were forced to melt away in the central California sun or drink off boredom in a hot, sweaty heap while watching the entirety of the contest. The participatory aspect of surfing events was rendered null and void. But I digress.

The $30 million price tag to build these monstrosities is just the start (and that’s just Kelly’s park). Then there’s the operation. In May, Stuart Parsons who owns the BSR Cable Park told The Waco Tribune that he expected a $20,000 electrical bill each month. That’s before paying any of the park’s employees or doing any kind of maintenance (the Surf Ranch has it’s own team of lifeguards complete with jet skis). To make up for these gargantuan costs, surf parks charge around $90 an hour. See where I’m going with this?

The first phase of the Boise Whitewater Park cost the city about $3.6 million (there are two more waves being built in Boise as I write this that’ll cost between seven and $11 million). Bend, Oregon, a sister city to Boise five hours west in the high desert opened a beautiful surfing facility in 2015. The cost? Just under 10 million and completely free to the public.

Comparably, the operating costs are supremely low. Paul Primus, who is part of a two-man team that operates the Boise park says the wage for him and his co-worker probably wouldn’t equal the wage of a full-time city employee. Bend, has two full-time employees and an assistant to help with the tubing channel (the Bend Park features three river channels). “We hired a second waveshaper to have more depth so we could cover seven days a week,” said Julie Brown, Communications and Community Relations Manager with the Bend Parks and Rec. Parks and Rec officials estimated the yearly operating costs between $175,000-200,000, going to salaries, wages, employee benefits and maintenance. “It was more of an ongoing investment than we initially envisioned but the amount of usage on a daily basis makes it worth it,” Brown added.

Aside from the healthy surfing crowd, the Bend Parks and Recreation Department hosts a large river floating community which undoubtedly uses a significant portion of that operating cost. Brown says they estimated that 250,000 people floated through the river left channel in the park that’s designated for tubers. Which brings us to the community aspect: surf parks are more like Disneylands or Magic Mountains or any other amusement park. They’re walled off to the general public and mostly generate their own economy.

In-river, adjustable wave features are built in the middle of cities, and always to transform dangerous, old low-head dams that are hazards to communities when the river floods, turning them into something the whole town can use. Businesses like bars, coffee shops, and eateries have popped up in both Bend and Boise. In Boise, one side of the river is known as Garden City, a separate municipality that has a history of crime. The neighborhood near the wave has transformed virtually overnight into a hip urban center. “Absolutely,” said Brown when asked if Bend’s wave has created a similar economic lift. “There are more businesses along with an uptick in rental and real estate activity, and there are surfboard manufacturers optimizing boards specifically for river surfing.” One economic study estimated that these parks can generate up to $4 million in annual spending that goes straight to communities–from things like travel, real estate, and small business development.

As surfers know, virtually every wave in the world is easier to ride when a custom shape is used, designed for that specific wave, be it Pipeline, Trestles, or Ruggles. Similarly, a boutique riverboard industry has popped up in the Pacific Northwest with brands like Corridor, Cubicle out of Bend, Chris Peterson Surfboards, Strongwater Surf out of Missuoula, and Bitter End providing customized rides (“Basically, with riverboards, you remove all the tail rocker to increase speed,” Primus said).

The economic, safety and recreational benefits are all easy to defend in the construction of river waves. And there’s plenty in the works around the world. But the knock on river surfing has always been wave quality. The surfing, generally, is more corrective or side-to-side, where the top end is learning to use one’s rail instead of turning on the fins (never a bad thing), spinning 360s and the occasional air. But with a whole lot less top-to-bottom surfing. 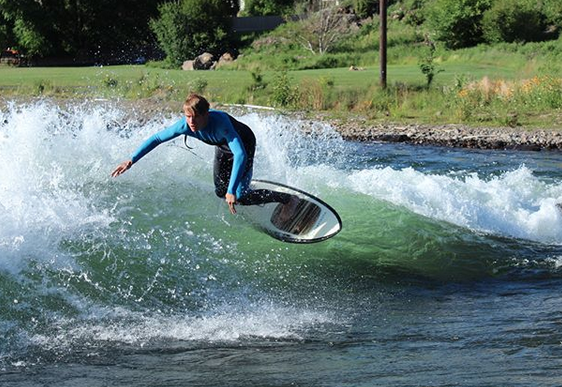 The Bend Whitewater Park has become a popular place in the Central Oregon Town. Photo: Cubicle

That might be changing says Ben Nielsen, a project engineer with the McLaughlin Whitewater Design Group that designed the first Boise wave. Nielsen, who went to Cal Poly in San Luis Obispo, Calif. and is a lifelong surfer, is currently working on two projects in Europe and one in Tulsa, Oklahoma that really has him excited about the future of wave quality in rivers. “It’s similar to a Boise or Bend. It had a super dangerous low-head dam in an urban setting and the community voted to tax themselves to fund a recreational amenity,” he says. “There’s a series of features around this project that have a low flow bypass channel to create a series of surf waves, kayaking waves and tubing spots. But the big deal is a big wave area, adjacent to it, where two wave shapers side by side will create a 70-foot-wide wave at flows of 3,500 CFS (high flow). I think that has the potential to be an overhead standing wave that will create what I like to call asymmetrical surfing.”

Nielsen is a designer to keep an eye on as he’s working to create barreling conditions in the river, the holy grail of artificial surf and something that has made the Surf Ranch such a phenomenon. “It’s definitely doable, even on this project (in Tulsa). As an ocean surfer, that’s what makes the most special river waves: asymmetry. A barreling section or some flow at an angle that’s more down the line. You look at Lunch Counter on the Snake River in Wyoming. That’s kind of like surfing a beach break with a wedging wall. That’s what we’re working towards.”

The barreling wave is also very dependent on consistent bottom contours or artificial reefs, like the Surf Ranch. In the river, that’s a tough ask because of constantly flowing sediment that changes bottom contours. But aside from wave shape, convenience and the environment are aspects of river waves that make that segment so much closer to “real surfing.”

“One of the big challenges with wave parks is the footprint,” Nielsen says. “You have to have 30 acres, which precludes it from being in an urban environment. They tend to be rural and that has the implication on the convenience factor. People can’t just go get an hour surf at lunch. But the most important part, to me, is perhaps the sustainability of river waves. You’re barely using any electricity to run these things, you’re creating them from pre-existing structures and you’re tapping into endless, free, green energy in river water.”