Opinion: The Nazaré Surf Ban Punishes Those Who Don’t Deserve It 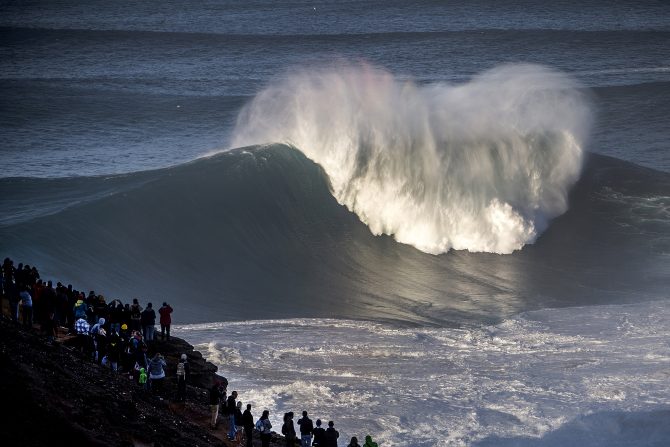 Big, clean, Nazaré and the crowds to go with it. Photo: Hugo Silva/Red Bull Content Pool

Locals are now one week into an unprecedented and controversial surf ban on Praia do Norte amid health concerns from crowds gathered here last week to witness record-breaking swell.

Unfortunately, the sensationalism of this news does little to communicate to the public the effects closing a beach has on the local community. Since its founding in 1192, the people of this local village have led a largely quiet and reclusive life, governed by one of the most intense corners of the Atlantic Ocean.

In the past ten years, this long-enduring, sea-faring heritage has found its community catapulted into the global spotlight.  Waves that once left the wives of sailors and fishermen widowed and their families bereaved are now hyped as the eighth wonder of the world.

Thousands of tourists gather along the cliff-turned-amphitheater to witness the spectacle-turned-circus each time famous surfers and surf media generate inescapable buzz around an anticipated swell. Except that this time, in a tiny fishing village of 15,000 people (mostly elderly), the municipality wasn’t expecting 3-5,000 tourists (half of whom were foreigners) in the middle of a global pandemic and on the heels of a second nationwide lockdown. Following that “Century Swell,” Portugal’s National Health Commission banned “Free Surf and Tow-in Surfing”  at Praia do Norte and in the municipality of Nazaré, District of Leiria.

It is not the locals’ fault as the requirements of social distancing guidelines fell on a municipality without the infrastructure and resources to enforce it.

It is not the locals’ fault that food trucks ran dry in the early hours, that streets were crammed with cars, and that the cliffside was completely littered with toilet paper and face masks.

It is not the locals’ fault that surf media clogged social feeds with swell forecasts alongside FOMO-inducing buzz words like RECORD SWELL and XXL.

It is not the locals’ fault that big wave superstars from all corners of the globe use their prestige and privilege to bypass travel restrictions, flying in empty aircrafts fast enough to land before the swell, each with his own posse of cameramen, posting their waves and wipeouts almost as soon as they happen. They come and go as fast as the waves, spending no time cultivating any understanding of the neighborhood they just walked all over.

It is not the locals’ fault. But they are the ones who suffer the consequences.

Today, locals can’t take a simple surf without risking a heavy fine and/or the police confiscating their surf or ski equipment.

And no, of course surfing isn’t more important than public health. But a week later, after the event, Nazaré recorded only five new COVID cases, showing no significant correlation.

The bad publicity has instead left a bruise on a village whose reputation otherwise has been spotless. Will people whose livelihoods depend on tourism make it through the winter without any compromise in terms of controlling crowds? Will professional athletes be able to train for the most intense conditions on Earth? Will local groms be able to paddle out and experience their own waves the same way they watch their surf idols?

Nazaré’s Mayor, Walter Chicharro, has a meeting on November 10 with Portuguese health authorities to negotiate a contingency plan, saying he “will use his full power to convince them to lift the ban.”

In the meantime, one thing Nazaré can be certain of is that just as behemoth mountains of water will roll through for a third of the year, so too will the rest of the world. They will leave as quickly as they came, take more than they gave back, and it’s up to the community to not allow itself to be a victim of a new form of colonialism, but instead learn to stand up to protect what it loves now with everything it’s got.

Editor’s Note: Soraya Simi is a writer, photographer, and filmmaker from Southern California who’s currently living in Portugal as she works on a photo series about Nazaré and the surrounding area.