Opinion: Why Rottnest Island Is Exactly What the World Tour Needs 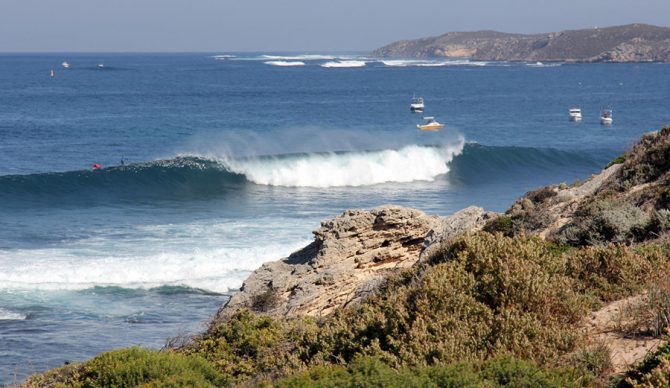 Can you see yourself surfing it? Photo: World Surf League

It’s been some years since I visited Rottnest Island, the tiny sandy islet located 11 miles offshore from the Western Australian capital of Perth, but I can’t imagine that it’s changed much. I’d gone there with three friends – Dave Parmenter, Tom Curren and his then-wife Marie – during a break in the old ASP’s Aussie leg of the tour, having been regaled of the island’s charms by Mitch Thorsen, a top-16 ranked pro born and raised on “Rotto”, and one of only a few of its local surfers.

Charm was right. From the moment we disembarked in Thompson Bay, the island’s main (and only) settlement, it was like stepping into some surfing summer camp fantasy. Unlike the majority of day-trippers streaming off the ferry from Perth, we’d booked a bungalow, intending to stay a few days before flying back up to New South Wales for the next scheduled contest.

We fell hard for the place straight off. Our bags and boards were loaded onto a flatbed trailer, to be delivered to our bungalow (“No worries, mate. We know where yer stayin’”) while we were directed to a large, waterfront warehouse filled with phalanx after phalanx of rental bicycles. Turns out that aside from a few service vehicles and a tourist bus, no cars are allowed on the island, and we were all assigned our yellow bikes, being cheerfully admonished to remember on which side of the road to ride them.

Ecological considerations aside, this two-wheel mandate makes sense when you realize that the island totals a scant 7.3 square miles, consisting of rolling, lightly forested hills, low-lying salt marshes and limestone bluffs cupping a series of white sand coves; it’s easy cycling along the many bike paths provided for those intrepid enough to explore beyond Thompson Bay’s conventional tourist attractions.

In any case, you’d never want to run over a quokka in a rental car. Quokka’s being the island’s very populous indigenous marsupial, approximating, depending on your disposition, either a large rat or a small wallaby; the adorable, short-tailed little critters with the eerily self-satisfied countenance having developed a reputation as “the world’s happiest animal.” And why not, having enjoyed a predator-free environment and the enduring good will of Rotto’s 300 permanent residents for so many years now.

The quokka also lent the island its European name, when in 1696 Dutch voyager Willem de Vlamingh first touched his keel here and, unimpressed with the silly-grinning marsupial, called the patch of sand and scrub a “rat’s nest.” Of course the Aboriginal Noongar people, who, before rising sea levels cut it off from the mainland, populated this island more than 30,000 years ago, no doubt had a better opinion of the quokka, and called this place Wadjemup.

We just called it fun. After breakfast in our colonial-era bungalow (milk and juice delivered to the doorstep, along with fresh bread and croissants from the local bakery that Mitch Thorsen’s family still ran) we’d hop on our bikes, boardbag straps looped over our shoulders, and like some goofy bike gang pedal out of town and into the bush, making our way west toward the Narrow Neck and Strickland Bay, Rotto’s premier wave. 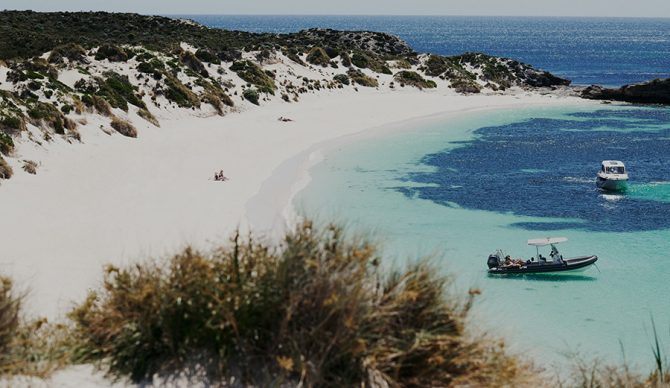 With beaches like this, who needs waves? Photo: Chris Gurney

“Stricko” is a beautiful surf spot, being a limestone reef break at the epicenter of a pristine, white sand bay fronted with craggy bluffs; a real surf-trippy kind of setup. We seemed to always surf it alone, but even Dave and Tommy took a bit of time figuring out the fall line, peaking up, the way it did, with a short closeout right and a longer left that ran into a shallow inside reef section that required either a judicious kickout or a banzai last move onto the jagged limestone. Not a great wave, but a good wave, of the variety that a vast majority of surfers would be happy to find on the sort of surfari we were enjoying: an average wave in an above-average setting. And absolutely the last place I ever would’ve imagined a championship world tour event would be held. But I’m so glad that one is.

Now stay with me here. I don’t know about you, but the whole “dream tour” surf contest concept, despite being visually exciting, has always struck me as having a palpable “fuck you” component. Like, “Look what we get to surf and you don’t.” Football fans don’t dream of playing in Arizona’s State Farm Stadium, they dream of sitting in the State Farm Stadium watching someone else play football. Surfing is different, and so are surf contest fans. When we watch contests at piping Snapper or peeling Cloudbreak or especially at mechanically perfect Lemoore, we immediately put ourselves on those waves, at least in our imaginations. Then just as quick come up hard against the realization that we’ll never, ever get to surf waves like that, at least not with the water cleared and a Jet Ski assist back to the takeoff spot. And so we regard the competitions held at those E-ticket breaks with a mixture of awe and envy, never fully focusing on the performances of those lucky surfers being provided the luxury, but more often marveling at what it must be like for those entitled bastards.

Not so at the Rip Curl Rottnest Search presented by Corona. An event held at Strickland Bay on Rottnest Island will be different, a contest for the people. Watching the world’s top competitive surfers competing in waves that the average surfer can relate to, in a setup they can relate to, will bring competitive performance into sharp focus, the viewing of which will be untainted by the more typical envy. Even more significant, watching a contest being held under the island’s newly-formed Department of Biodiversity, Conservation and Attractions strict environmental impact guidelines, harkening back to the decidedly low-impact, folding chair, soggy wet judge’s sheets and hand-held airhorn protocol of the many Aussie State and Junior Tour events that have been held at Stricko, will add the element of charm to what many surf fans view as the glitzy backdrop of conventional world tour events—an inclusive rather than exclusive experience.

I realize that a different tier of surf journalists will most probably take umbrage at not only these remarks, but at this entire way of thinking. These are the ones who write off contests held at venerable surf spots like Bells Beach, Margaret River, and Lower Trestles, espousing the opinion that the only valid surf contests are those held in black-diamond barrels (which may happen if the contest is moved to the “Roto Box”).

I wonder, though, how many of them have ridden their bikes out of Thompson Bay, rolling past Serpentine Lake on the path to Strickland Bay. Here, in my opinion, will be no spectacle, but a neat little contest, run on a beautiful stretch of coast, in conditions that just about anyone can relate to. And take it from Rotto’s quokkas: that’s plenty to smile about.