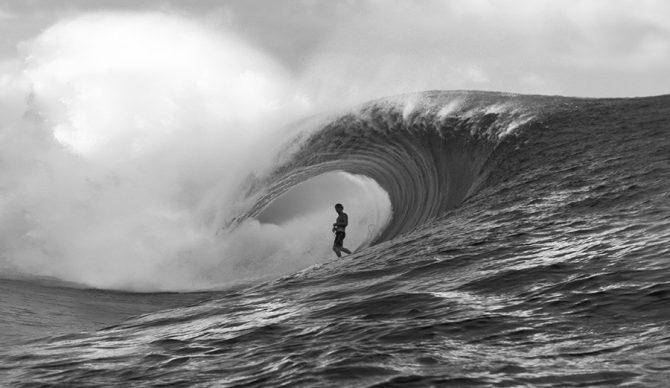 We’ve all heard and said, “a picture can’t even do it justice.” And there’s an obvious list of waves on this planet which we all just assume this to be true about. Places like Pipeline, Nazaré, and Teahupo’o topping the list of not-so-secret locations that fit the bill. And Carlsbad’s Owen Beim has one of those photos in his growing portfolio: Eimeo Czermak standing cool as can be in the throat of a Teahupo’o tube that is wider than it is tall, foam filling most of the frame.

Beim calls it the most memorable photo of his first trip to Tahiti with fellow photographer James Ferrell and some other friends, in part because the place had just given him the wave of his life a few days before.

“I’ve gotta try at least one proper Teahupo’o wave,” he remembers telling himself in the lineup during a building swell. It was early in the trip and he’d already caught a few waves, but when one of those waves came rolling through and the small crew of people cheered for him to go, he did.

“I completely zoned out the whole drop,” he says. “And I just remember being in the most intense wave. I’ve never felt any energy like that before. And then I just remember getting spat out and thinking, ‘What in the world just happened?’ I didn’t even process it for another full day.”

Having a new wave-of-a-lifetime was more than just a story though. As a photographer, it offered perspective. Getting the complexities of Teahupo’o dialed is different from other world-famous waves, and Beim was giving the place time and respect to learn its nuances.

“That taught me a lot about the wave in general,” he said. “It looks so perfect but it’s so hard to ride. Every wave that I took just looked like a straight closeout, it’s weird to explain.”

All this set the table for Beim to describe Czermak’s wave later in the trip.

“Even that photo doesn’t do it justice. That thing was so much bigger in person,” he says, blown away by Eimeo’s casualness taking center stage. It’s the biggest wave he’s ever seen.

He sings the praises of the entire community of Teahupo’o regulars as well, calling the current generation of up-and-coming chargers like Czermak “just lunatics.” He fires off a list of local chargers and talks about them starting to receive the attention and praise they deserve.

“This younger generation of local guys is just crazier than any community I’ve ever seen in surfing. No doubt in my mind.”

The Czermak image is now award-winning, nabbing Owen the top prize in The Inertia Film & Photo Challenge 2022 (presented by White Claw) for best Black & White photo. Color can sometimes be a distraction from the impact of an image and in the spirit of this challenge’s black & white category, less is definitely more for this Teahupo’o capture.