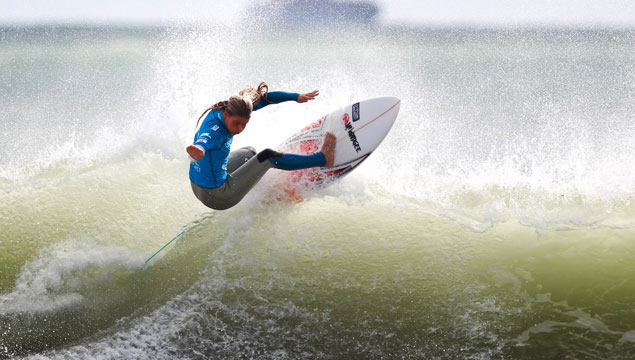 When the 2012 ASP Women’s World Championship Tour ended in August (four months ahead of the Men’s), New Zealand’s Paige Hareb (who finished the year ranked 10th) began raising money for her 2013 bid using a novel approach: crowdfunding. With a video posted on a new Kickstarter variant called Sportfunder, the world’s best female goofyfooter makes a plea for grassroots support from her fans:

As with most Kickstarter projects, you get a little something if you donate or pledge – from email updates or t-shirts to personal surf coaching with Paige or your logo on her surfboard during contests. Her target is NZ$30,000 (around US$25K) by November 20th, and so far she’s raised over $2,000.

The hard truth is that it’s not easy to finance a shot at the World Title, even if you’re considered the 10th best female surfer on the planet. The top women struggle to make ends meet while competing for prize purses that aren’t extremely lucrative, especially when compared to the men’s compensation. While the best male goofyfooter, Owen Wright, is comparably ranked 9th on the men’s side, he’s hauled in $77,800 so far this year. Paige took home just $48,100. Owen’s already earned more this year than the female champion Stephanie Gilmore ($72,600), but significantly trails number one Mick Fanning ($221,950 and counting). That the guys have three more events doesn’t account for the big disparity in prize money.

Female surfers have to pay travel costs and other expenses just like the men, but aren’t rewarded the same. And of course they can’t count on winning enough to fund their world tour efforts in the first place. That’s where sponsors come in. As Tetsuhiko Endo explored at length in (Surfing), Tits, and Ass, it can be hard to get those sponsors. So Paige is trying something different, a method that has been used to fund projects from video games and albums to electric skateboards and 3D printers: crowdfunding. While companies like Kickstarter have brought the idea to the fore, it’s not really new; way back in 1997, fans underwrote a British band’s U.S. tour.

Remember that old bumper sticker, “It will be a great day when our schools get all the money they need and the air force has to hold a bake sale to buy a bomber”? Well, maybe someday all the great pro surfers will be fully sponsored. But for now, best of luck to Paige in crowdfunding her world tour campaign.