Para Surfing World Champ Liv Stone Was Once Inspired to Surf; Now She Inspires Others 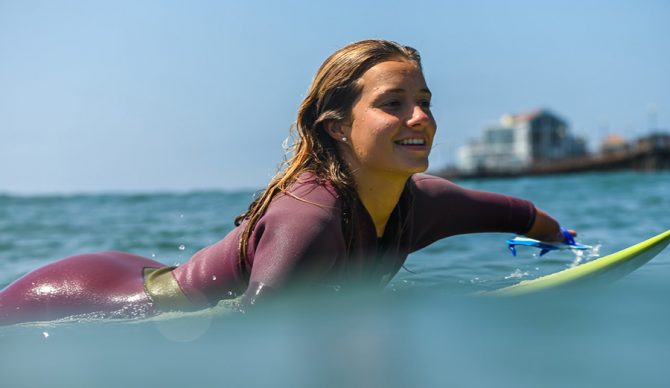 It was a beautiful autumn afternoon when Liv Stone paddled out into the ocean for the first time. The kind of day when the sea is bright blue beneath a cloudless sky and the waves sparkle as the sunbeams brush them.

That afternoon, in only her second attempt at catching a wave and on the first ride of her life, Liv Stone immediately knew that surfing would become just that – the ride of her life.

Stone, 19, grew up in a small town in the Amish country of Pennsylvania. Born with a congenital limb difference, Stone’s arms end just above the elbow with two fingers on each hand. She grew up with two older brothers and always lived an active lifestyle, utilizing her athletic abilities on the soccer field and in the swimming pool.

In October of 2017, Stone was accepted into the Beautifully Flawed Retreat, a surf camp hosted by Bethany Hamilton that’s designed to unite young women that face limb differences. It was there in Del Mar, Calif. that Stone caught that first wave, and felt her whole world come together. 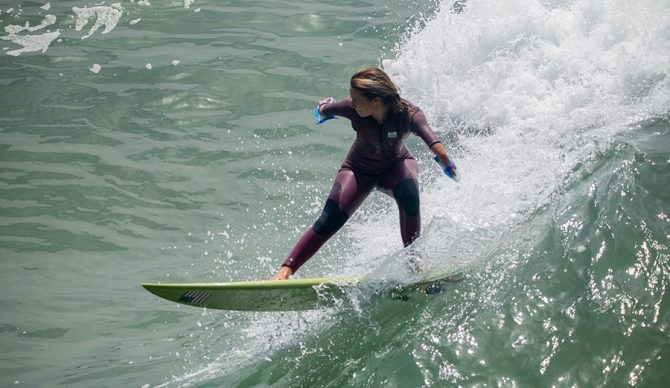 Liv constantly critiques her own pop-up, but once she’s on her feet, she rips. Photo: Avery Schuyler Nunn

“I felt everything around me disappear,” says Stone. “I rode the wave all the way to the beach and heard my friends cheering. I continued to catch waves all day afterward – it came so naturally. It made me feel whole.”

While Stone immediately knew that surfing was something she hoped to do for the rest of her life, she left the sea slightly discouraged on how such a dream could possibly materialize while living in a landlocked state.

“I didn’t know right then and there how I would pursue it,” she says, “but I knew at that moment that I wanted to pursue it forever.”

“My family and I were coming out from Lancaster, Pennsylvania a few times a year for the CAF events and for some vacations. We realized early on that surfing was something I was quickly getting good at, and was something that I could fully do with my life if I wanted to,” she told me.

In 2019, with Stone’s older brothers off to college and the vision of a professional surfing career coming to fruition, Stone and her parents made the move to Carlsbad, California.

Stone began to refine her surfing abilities and brainstorm necessary adjustments to advancing her performance. Because Stone has only four fingers and much shorter, smaller arms than the average surfer, the strong strokes and cupping motion needed for competitively paddling into waves remained a mystery to be solved.

“My dad and I were brainstorming on the airplane,” recalls Stone, “and I remembered that while on the swim team at school I had used paddles that I strapped on in order to swim. So I’m like, let’s try it!”

Stone and her father then ordered swimmer’s paddles, and with the help of a little duct tape, created a makeshift solution that Stone has continued to use since.

While the paddles are notably something that a typical surfer would not need, Stone feels that the ocean blends the contrast of “different” versus “normal” that she feels is more evident on land.

“The ocean doesn’t discriminate,” she says. “When you paddle out, the ocean is going to throw everything that it has at you. It’s not going to be like, ‘Oh well, you’re a woman, you’re a man. You’re black, you’re white. You’re disabled, you’re not.’ No matter who you are, it’s going to knock you down with waves and it’s going to bless you with waves. The ocean makes me feel like my limb difference doesn’t matter. Whatever it is that I’m going through that day, the ocean acts as my therapy and makes me feel truly at peace.”

Nowadays, Stone spends every day in the water, pouring her heart into surfing. Through her hard work and increasing self-worth, Stone has come to fill the role of inspiring others. A role that she once only saw in her mentors and could hardly envision within herself.

“Out in the water the other day, this little six-year-old girl told me that I was pretty,” says Stone. “It seems like such a small thing – but when she looks up and sees me on my board, she sees me simply as a woman and a surfer above all else. She sees me as someone who can mentor her and inspire her. It’s insane to be in a role where I can inspire others now!”

Stone currently competes (and rips) for team USA, has four gold medals and two Para Surf World Champion titles. Looking to the future, Stone’s ultimate goals are to compete in the Paralympics and to continue to inspire as many people as she can.

“Competing for me is showing the world what adaptive athletes are capable of. I want to continue to love surfing as much as I did when I first started,” she says, “and to breathe the knowledge that I’ve learned from my mentors and the ocean into the next generation of people who want to live an active lifestyle – no matter who they are.”