Part 2: The Rise and Fall of Surfing: A Prophecy

Editor’s Note: Last week, we ran Part one of The Rise and Fall of Surfing: A Prophecy. This is the end.

Whilst everyone continued to disagree about what surfing actually was, people lost interest in watching surf competitions, and the surfers themselves became so disillusioned that they abandoned contests altogether. Among the most confused of all were the former ASP judges, but that didn’t matter because everyone had lost faith in them long ago. No one is really sure what happened to them, but some say they can be seen wandering like zombies around the old contest sites. Some are said to hop and jump, whilst others crawl or shuffle.

Instead of sitting behind stuttering screens listening to commentary which makes cricket seem edgy, people go surfing again, but no one is really sure how to do it and most “surf” with all the style of a seagull with a broken wing.

The old timers continue to bury rails in the ocean and get as pitted as possible (but only when the weather decides to co-operate) and The Aerialists mainly “surf” indoors on mechanical waves (unless it is onshore and the old timers allow them to go outside).

Board designs have changed radically to suit these new surf styles. They are mainly short, fat, stumpy little things, like Travis Logie, and they have footstraps.

Footstraps, of course, were de rigueur in many of the ugly boardsports but had long been shunned in surfing (tow-surfing excepted of course, but no-one really considered that a credible pastime anyway). The new “surfers” were not afraid to borrow ugly traits from all the bastard children they had spawned over the years. Surfboards are unrecognizable in the traditional sense. What began as a decrease in length has morphed into modern planning hulls before spewing forth ugly little snub nosed boards that resemble wakeboards and kiteboards.

The prophets Jordy, Gabriel and Julian have led the charge in this bastardization of board design and made it socially acceptable in a way that washed-up windsurfers like Rush Randle never could. They saw footstraps as a logical progression and flips and spins became far easier. (They chose to ignore the fact that Filipe Toledo shattered both his ankles in the early days with straps which were too tight and was forced to become a sponger.

Most of these new “surfers” hang out in depraved places called “Wavegardens” which is a complete misnomer as they are nothing like gardens or waves. They are filled with spotty little boys in multi-coloured wetsuits with 3ft boards and ankle braces, and the water reeks of piss.

John John tries for many years to split his time equally amongst the old timers in the ocean (for he is the only one they will accept) and The Aerialists in their inland cesspools. He preaches by example that it is ok to surf both ways, both can be beautiful if you accept them. But still people will not agree and eventually John John loses his way.  After a lengthy chat about the dorsal fins of Minke whales with the wandering sea hippy known as “Rasta,” he begins to question his purpose. Whilst scribbling colorful pictures of sea mammals on his board with crayons one day, he is noticed by the one they call Sealtooth and is taken in by the false prophets. He squanders his talent by making arty but insubstantial web clips and growing kale.

John John has abandoned us and surfing as we once knew it is dead. Too much diversification has diluted the sport and stifled interest. It is now mentioned in the same breath as snow skates, rollerblades, and windsurfing. 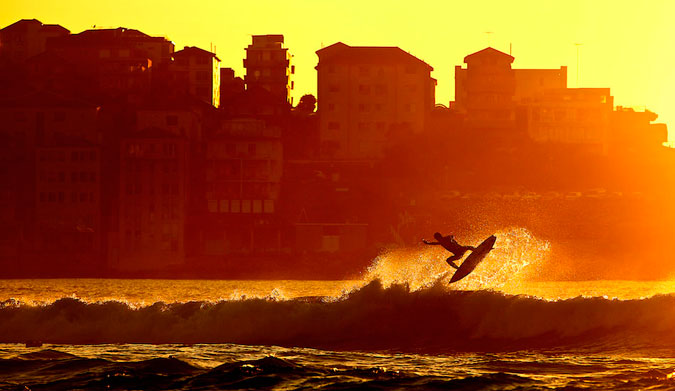