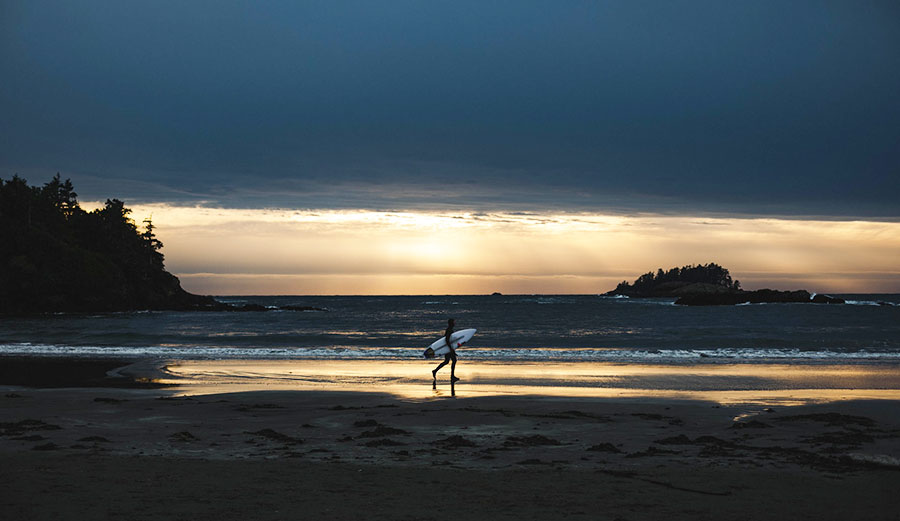 Tofino has about 2,000 residents. So what’s it like to be in an isolated town during a time of self-isolation? Photo: Shayd Johnson/Unsplash

I live in a very small town on Vancouver Island. There are about 3,000 people who live here. We’ve got a bar, a grocery store, and a handful of restaurants, but that’s about it. It’s quiet most of the time, aside for a few brief months in the summer when the lake is full of boats flying around full of happy, tanned people who are drinking too much and smiling at strangers because they’ve been drinking too much.

Even then, it’s pretty quiet. I work from home, staring out the window of my office at the lake and leaving the house only to walk the dog for a few hours down the road and up a mountain or to go to the little grocery store. It’s rare that I see anyone on those walks. So, despite the world coming to a screeching halt as a virus climbs inside our bodies and threatens to turn our lungs into bags of ground glass, not too much has changed in my day-to-day life. When talking with friends who live in places like, say, Los Angeles, it becomes clear that, depending on where you live, we are having vastly different experiences surrounding the pandemic. That got me thinking about another little town on Vancouver Island called Tofino, a rugged little town a few hours away from me that’s quite literally at the end of the road. Highway 4 only reached it in the 1960s, and it’s a long haul over winding, narrow roads to get there.

It’s a stunning place, though, with sprawling, beautiful beaches, good waves, and towering mountains. The air smells of cedar, pine, neoprene, and petrichor. There are under 2,000 residents, and I’d wager that most of them surf. In the summers, Tofino goes from a sleepy, rainy surf town to a sunny, bustling tourist destination. Pete Devries is Canadian surf royalty, and he’s lucky enough to call Tofino home. I got him on the phone to ask him about what life in a pandemic is like when you’re in a tiny town in the middle of nowhere. And as you’d expect, it’s hitting hard there, too.

“The biggest changes for me personally are not being able to do any trips,” Devries said, slightly out of breath from walking his dog. “Even local surf trips with friends. My son’s not able to hang out with his buddies who he hangs out with all the time. We’ve had to get creative with ways to keep him busy. We’re doing the social distancing. Last night we went for a paddleboard. There were a bunch of families on the inlet hanging out on the inlet pretty well apart from each other. I’ve been getting him in the water surfing a ton; hockey on the road, basketball — it’s been really good, actually. He’s got no choice but to hang out with his parents and enjoy it.”

It’s a strange thing, though, being in a relatively isolated community. If the road to Tofino was simply closed, life could, for the most part, go on as normal. But that isn’t possible, because summertime in Tofino is a major money-maker. The Canadian government has set up a few safety nets to help during the crisis, like CERB (Canadian Emergency Response Benefit) which drops $2,000 into your bank account each month if you’re out of work because of the Coronavirus. Small businesses can get 75 percent of staff wages paid for and no-interest loans that turn into partial grants down the road, but it might not be enough for a place like Tofino.

“If our town misses a whole summer, I don’t know how many businesses will survive,” Devries said. “The government handouts are good for a lot of people, but the property value is so expensive here… I just don’t see them being able to cover even a good portion of it. A lot of people have vacation rentals up here who are carrying large mortgages. You’re not talking about hundreds of dollars a month, you’re talking about tens of thousands and up to hundreds of thousands that people are owing a month. It’s going to be interesting.”

British Columbia as a whole is doing relatively well. For the most part, people are staying at home. It was a concern, though, that the long Easter weekend might coax people into taking a road trip to Tofino for a few days. Thankfully, it didn’t happen.

“This long weekend was quiet, which is good,” Devries said. “I was a little worried that it was going to be crazy busy and that people weren’t going to pay enough attention. For the most part, people have been really good about not showing up. All the hotels and stores, vacation rentals and stuff, it’s all closed. There aren’t too many places for people to stay, so it’s good. You still see some tourists, but normally all the beach parking lots would be completely full.”

But that doesn’t mean the locals aren’t still surfing, and unlike many places, it’s still allowed. With many of the businesses closed, lineups are more crowded than ever.

“The water is pretty busy at this point, but that’s because no one is working right now,” Devries told me. “I don’t know exactly how I feel about surfing at this point. I think I wish they didn’t have to close the National park. Unfortunately, that condenses everything to Cox Bay, but it’s not hard to distance at beach breaks. I think the main thing is for people who are going to the beach: don’t pick up your buddies like you normally would. I feel like some people are taking it less seriously, but for the most part, I think people are being really respectful.”

I have a suspicion that the town I live in has had a few cases already.  Last month, it seemed as though half the town was sick. It could have just been the flu — ’tis the season, after all — but the timing sure is strange. Pete feels the same way about his town.

“I don’t know for a fact if we do,” he said when I asked him if there were any cases in Tofino. “It’s unfortunate that they can’t tell us. It would be really nice to know. I think people might act differently if they knew for a fact it was in small communities. But I have a feeling there are cases. From what I can tell it sounds like there probably is… I just don’t know it for a fact.”

Whatever the case may be, after all this blows over — and it will in time — the ramifications are going to be far-reaching. So far-reaching, in fact, that they’ll have traveled all the way down Highway 4 to Tofino, the little surf town in the middle of nowhere at the end of the road.