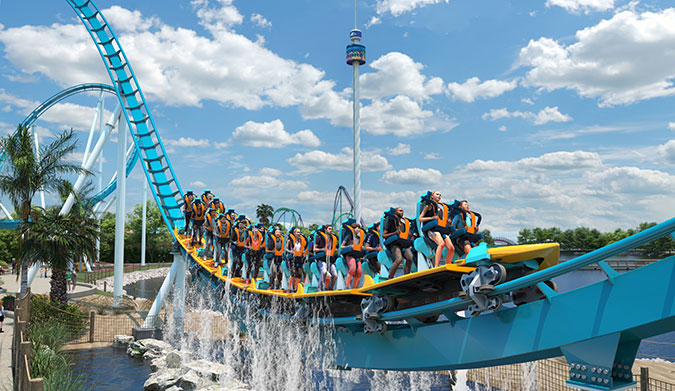 “Pipeline: The Surf Coaster” at SeaWorld Orlando will be the world’s “first surf coaster offering riders a unique experience that mimics the movement and motion of surfing.” Image: SeaWorld Orlando

I’m a big fan of roller coasters. A few years ago, while I was living over the canyon from Six Flags Magic Mountain in California, I would routinely go alone, mid-week, and bang off a few quick laps of Goliath and Tsatsu. If time and lineups permitted, I’d make my way over to X2. Then I’d finish the day by heading across the parking lot to Red Lobster, where, slightly queasy, I’d gorge myself on trash lobster and trash biscuits. Boy howdy, do I miss those days, driving home into a setting sun, hands greasy on the steering wheel, Bob Seger playing softly with the driver’s side window open in case I needed to quickly vomit out of it. Anyway, SeaWorld Orlando has a new roller coaster, and it may be of interest to you. It’s called Pipeline: The Surf Coaster. It will, according to the press release, “be the world’s first surf coaster offering riders a unique experience that mimics the movement and motion of surfing.”

I would like to say here very quickly that I am not a fan of SeaWorld. Dolphins and whales and turtles aren’t there to jump through hoops for us, and it’s frankly pretty difficult to watch a bunch of people smeared in popcorn butter and sunscreen screaming at a poor creature who certainly does not want to be performing tricks for an old herring given to them by a teenager in an ill-fitting wetsuit. But animal jails aside, I’m here for the rides.

“We strive to continually bring new thrills to our parks while also providing unique and engaging experiences with marine life that guests may not otherwise ever have a chance to have,” said Marc Swanson, head whale jailer and CEO of SeaWorld Parks & Entertainment. “All while knowing they are supporting an organization that has helped more than 40,000 animals in need over the last 55 years.”

It goes without saying that the last part of Swanson’s statement is self-congratulatory at best and complete and utter bullshit at worst, but holy cow, the Surf Coaster!

Riders stand on a “surfboard” and their seats rise and fall to “mimic the sensation of riding on a wave.” Riders, according to SeaWorld, will also “encounter the rush of hanging loose on a massive wave while in a standing position as the coaster sends them through several gnarly twists and turns with five airtime movements and an innovative ‘wave curl’ inversion and maximum speed of 60 MPH.”

Have you, like me, always wanted to “encounter the rush of hanging loose on a massive wave while in a standing position?” Well, look no further, because SeaWorld Orlando has just the thing for you. They also have animals in pools to make money, but let’s focus on the rides, shall we?