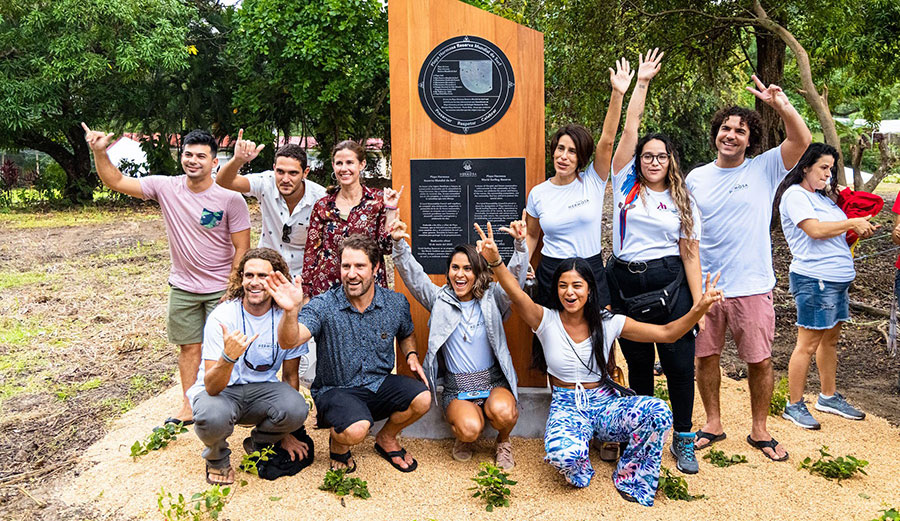 On Sunday, June 12, Playa Hermosa, a shining gem of a beach in Costa Rica, officially became a World Surfing Reserve. There are only twelve surfing reserves around the world, and Playa Hermosa is the first in Central America.

When a beach gets designated as a World Surfing Reserve (WSR), a few important things happen. The WSR Program is run by Save the Waves Coalition, and the goal is to recognize outstanding waves around the world, then protect key environmental, cultural, economic, and cultural attributes of the area they exist in.

The dedication was attended by the World Surf League, Save The Waves Coalition, Conservation International-Costa Rica, representatives from National Conservation Area System and Mayor Tobías Murillo.

“As surfers, we have a responsibility to protect our favorite waves and shores,” said Brisa Hennessy, WSL Championship Tour Surfer. “Playa Hermosa is one of the best waves in Costa Rica and is located in a biodiverse region that is in danger of pollution and development. This project will support conservation actions with local partners to help conserve this beautiful area.”

Hermosa is a welcome addition to the growing list of WSRs. “Playa Hermosa is well-deserving of its new title,” Save the Waves wrote in a release. “Its coastline has a variety of consistent surf breaks – with over 15 spots from punchy A frame peaks, to rocky point breaks and rivermouth peelers – in addition to an incredibly biodiverse ecosystem that is home to over 61 threatened species and the renowned Punta Mala Wildlife Refuge.”

Once an area falls under the surfing reserve umbrella, a council is put together with the intention of creating a “Stewardship Plan.” That plan consists of a series of actions to protects and support the entire ecosystem around the wave. This generally includes climate change adaptation, surf-oriented sustainable urban development, wastewater treatment, and biodiversity protection.

“Playa Hermosa is a perfect example of our World Surfing Reserve program,” said Nik Strong-Cvetich, CEO of Save The Waves. “The local leadership and on-the-ground efforts of our Coalition partners to preserve their surf ecosystem is inspirational for other communities looking to protect their surfing resources nationally and globally.”